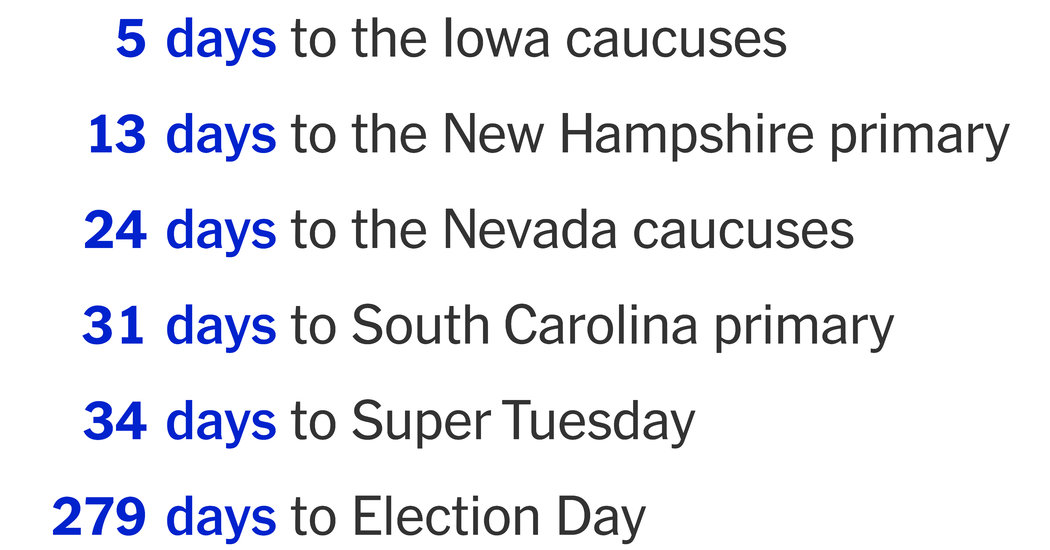 Welcome to On Politics, a daily political analysis of the 2020 elections, based on reporting by Times journalists.

A short day of closing arguments from the Trump legal team allowed Amy Klobuchar to fly in from Washington for a campaign event at Barley’s Taproom in Council Bluffs, Iowa, on Tuesday.

Sanders is surging in the Golden State

Sanders is not only leading in (some) Iowa and most New Hampshire polls. A new survey of delegate-rich California by the U.C. Berkeley Institute for Governmental Studies, conducted for The Los Angeles Times, shows him pacing the field with 26 percent support. Warren was in second at 20 percent and Biden in third at 15 percent, clinging to the threshold to win delegates.

The poll is particularly significant because while the California primary is technically on March 3, voting will actually begin this week. That’s because county registrars are sending out vote-by-mail ballots by Feb. 3 — the day of the Iowa caucuses. And if a candidate runs up a quick advantage in early voting, he or she could be hard to catch on Election Day.

That 15 percent threshold is crucial. Campaigns must reach it in congressional districts to win delegates in them, and there are some warning signs for Biden, who was at only 11 percent in the San Francisco Bay Area, according to the poll.

The story of Sanders’s lead in California is centered on young voters. He got 54 percent among those under 29, and about two-fifths of those in their 30s. Here are the full results:

The president held his first rally in New Jersey since taking office, packing the town of Wildwood with supporters — many of whom camped out in frigid temperatures. He was there to stump for Representative Jeff Van Drew, the anti-impeachment Democrat who, you might recall, flipped parties last month and pledged his “undying support” for the president.

Our colleague Katie Rogers was on the ground. Here’s her take:

I’ve been to dozens of Trump rallies by now, but this one has a particularly surreal backdrop: It’s taking place in a shuttered boardwalk town in the dead of winter, so most places are closed to the rowdy “Make America Great Again” crowd. Some of the streets are eerily empty, but for the people drifting around in Trump gear. Before the rally, some people were camping because the hotels are either closed or exorbitantly priced. I met a woman here who arrived on Sunday night and sat in a chair outside for the past two nights. She said it was all worth it once she was admitted into the venue at the front of the line. One definite theme I’m sensing is how desperate people seem to be for the opportunity to proudly fly their Trump flag in a blue-leaning state.

Impeachment moves into the questions period

The president’s legal team on Tuesday wrapped up three days of defense arguments in the Senate impeachment trial. On Wednesday, a new question phase will begin; it is slated to take up to 16 hours, so it is expected to stretch on through Thursday evening.

Here’s Sheryl Gay Stolberg, one of our congressional correspondents, to explain how it works and what she’ll be watching for:

Unlike regular Senate debate, where senators speak on the floor, the question-and-answer portion of the impeachment trial will feature written questions — and unscripted answers. Senators will write down their questions for either the House impeachment managers or Trump’s defense team, and will then give them to their respective party leaders. (Much of the question-writing is already being coordinated behind closed doors.) Those leaders will then submit those questions to Chief Justice John Roberts, who will read them aloud at the trial.

I’ll be looking for both sides to try to poke holes in the others’ arguments. Keir Dougall, a former federal prosecutor, floated these for-instances: Trump’s defense team has argued that unless the president commits a crime, he cannot be impeached. So Democrats might ask: “What if a president decides to simply quit coming to work? That is not a crime. Can he be impeached then?” Meanwhile, Democrats have argued that the president was trying to advance his own political agenda. So Republicans might ask: “Doesn’t every president do that? Where do you draw the line?”

Until this week, it had appeared that the trial might wrap as soon as Friday. But on Sunday night, The Times reported that the former national security adviser John Bolton’s soon-to-be-published memoir contained passages that appear to contradict key elements of Trump’s legal defense. On Tuesday, Republican leaders were working feverishly to block testimony from Mr. Bolton or other witnesses but indicated they didn’t yet have the votes to do so.