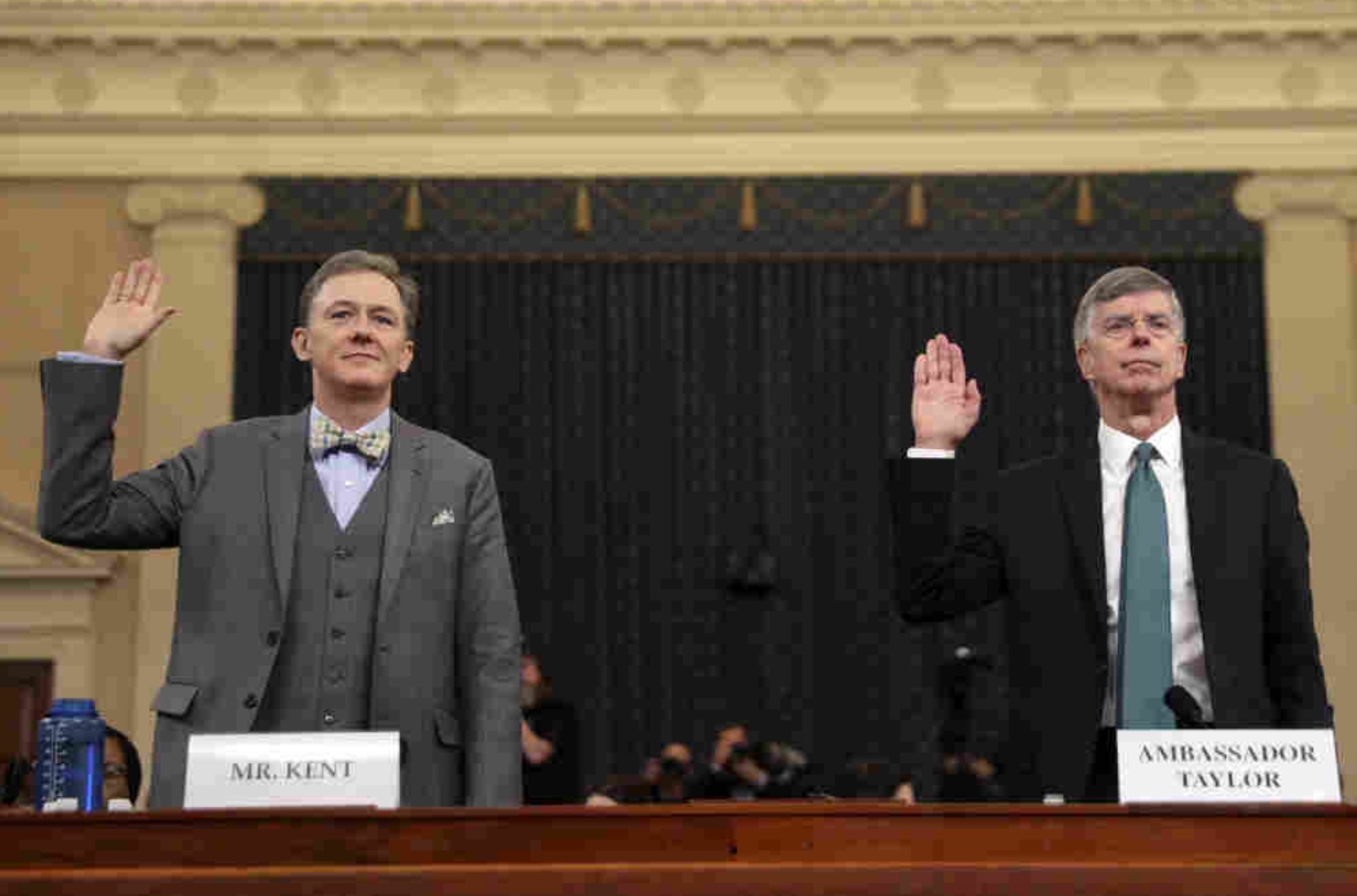 Yesterday I caught a bit of the impeachment theatre en route to a lunchtime speaking engagement. To be honest, if they’d come round and performed it live in my hotel room, I’d still have fled. If universally respected eminent lifelong career foreign-service bigshots Bill Taylor and George Kent are Adam Schiff’s star witnesses, their chief purpose seems to be to get Democrats pining for the charisma of Bill de Blasio and the self-effacement of John Kerry.

In a functioning system, the head of the government sets foreign policy and the diplomats enact it. So naturally there’s not a chance of that in Washington. When Taylor and Kent whine that there seemed to be a “shadow foreign policy”, the shadow is theirs; they spent a day testifying that everything had been going ticketty-boo for decades just as they’d always done things – and then Trump came along and took a different view. Oh, my! Anyone would think that, as Barack Obama once proposed, “elections have consequences”.

First up was George Kent, the “Deputy Assistant Secretary of State for Eastern Europe and the Caucasus”. He warmed up the crowd with some extensive biographical material about the “nearly sixty years” of George Kents (I believe he’s George III or some such) who have “chosen” to endow America with the blessings of their “public service”. It didn’t help that he wore a bow tie. Eventually he stopped talking about himself and started talking about Ukraine:

Our strategic aim for the entirety of my foreign service career is not possible without a Ukraine whole, free, and at peace, including Crimea and Donbas, territories currently occupied by Russia.

Crimea is, of course, familiar to anyone who’s read “The Charge of the Light Brigade”:

Theirs not to reason why
Theirs but to do or die…

Or, in the case of low-level diplomats who’ve never had a single conversation with the President, theirs not to reason why, theirs but to do or tender their resignations after first ensuring that their pensions won’t be affected. Instead:

As I said, any Tom, Dick or Harry can bandy Crimea, but it takes a career striped-pants Foggy Bottom public servant to toss in “Donbas” with gay abandon. It would have been interesting to see whether Adam Schiff or anyone else in the room could have found Donbas on a map. The odds of pinning the tail on the Donbas blindfolded are better. It’s bordered to the north, east and south-east by Russia, so it’s akin to the Russian foreign ministry regarding northern Mexico as a vital national-security interest of Moscow’s.

The proper response to George Kent bleating about “our strategic aim for the entirety of my foreign service career” is to advise him to join the Council on Foreign Relations and write a widely unread book. Instead, Kent rode on deeper into the valley of delusion:

Ukraine is on a path to become a full security partner of the United States within NATO.

By “full security partner”, that means that, if Quebec annexes New Hampshire, Ukraine will be obligated to come to America’s defense. It also means that the next time Putin invades Donbas America will be going to war with Russia:

If you’re wondering why that’s in America’s interest, fellow highly esteemed – or at least highly self-esteemed – foreign-service grandee William Taylor was there to second the motion:

Ukraine is a strategic partner of the United States, important for the security of our country.

Does any rational person believe either half of that sentence? Ukraine is endemically corrupt and its principal exports are, to London and Paris “escort” agencies, its comely if unibrowed blondes and, to America, Hunter Biden’s monthly stipend. Ukraine is a “strategic partner” of the Biden Family trust fund, and one can see that it might be inconvenient for sleazy corrupt princelings thereof to have to find new oligarchs to be on the take from. But out there in America Trump was elected because Americans think “the security of our country” starts on the Rio Grande not the Donets.

We all sympathize with the Ukrainian people. They’ve had it tough. They used to be “The Ukraine”, but some oligarch filched their definite article and smuggled it to Cyprus to pay for a “business associate” of Hunter’s to get a ski chalet in Courchevel. Nevertheless, some of us think that a self-governing people has the right to have the lawfully elected head of the executive branch make his own foreign policy, even for a full vital indispensable security partner such as Ukraine. If Ukrainian policy can never be changed, what’s the point of elections?

Finally, I would like to register an objection to ambassadors called “Bill”. Say what you like, but fourteen years ago, during a previous round of Democrat obstructionism, the self-regarding Foggy Bottom tosspots at least came with monikers worthy of their status. From my column of April 2005:

Norman Lear, who produced all those critically acclaimed issue-confronting heroine-gets-an-abortion ’70s sitcoms that seem a lot more dated than “The Beverly Hillbillies” these days, has now produced a People For the American Way ad in which a man who identifies himself as a “common sense Republican” objects to any attempt to end the Democratic filibuster of Bush’s judicial nominees. As things turn out, the “common sense Republican” has so much common sense he’s an official with a union that endorsed John Kerry.

Then there’s the 59 striped-pants colossi of the Nixon-Ford-Reagan State Department who’ve sent a letter to the Senate calling on them to reject John Bolton’s nomination as U.N. ambassador. According to the Associated Press report, the signatories include:

Princeton Lyman? Monteagle Stearns? Spurgeon Keeny Jr.? If Norman Lear’s shows had wacky characters like that, they’d still be in syndication. It’s a good rule of thumb that anything 59 economists, bureaucrats or diplomats are prepared to sign an open letter objecting to is by definition a good thing. But that goes double when the 59 panjandrums lined up against you are Princeton Monteagle Jr., President Nixon’s ambassador to the Spurgeon Islands; Spurgeon Monkfish III, President Ford’s ambassador to the Lyman Islands; Dartmouth Monticello IV, President Johnson’s personal emissary to His Serene Highness the Monteagle of Keeny; Columbia Long-Playing-Album, the first diplomat to be named by President Carter to the State Department’s Name Control Agency; and Vasser Peachy-Keeny, the first woman to be named Vasser Peachy-Keeny. One sees their point, of course: Let a fellow called “John” Bolton become ambassador and next thing you know Earl and Bud will want the gig.

Even Senator John Danforth, who should know better, got in on the act, taking half a page in the New York Times to give the Full Monteagle to the “religious right.”

~Mark will be back tonight on the telly with Tucker, live across America at 8pm Eastern/5pm Pacific.

Tomorrow, Friday, he’ll be conducting another Clubland Q&A, taking questions live around the planet at 4pm North American Eastern time – that’s 9pm GMT, but do check local listings. And next week he’ll be live in Montreal for a trio of special presentations of The Mark Steyn Show. Hope to see you there!

As we approach the seventeenth birthday of SteynOnline, we are very grateful to all our Mark Steyn Club members around the world, from London, Ontario to London, England to London, Kiribati. We hope to welcome many more of you in the years ahead. For more information on the Steyn Club, see here – and don’t forget our special Gift Membership.

Oh, and please give a thought to our Third Annual Steyn Cruise sailing the Med next year and with Conrad Black and Michele Bachmann among our shipmates. We’ll be attempting some seaboard versions of The Mark Steyn Show, Tales for Our Time, our Sunday Poem and other favorite features. If you’re minded to give it a go, don’t leave it too late: as with most travel and accommodations, the price is more favorable the earlier you book.

Juneteenth Is Bustin’ Out All Over

Universities Sowing the Seeds of Their Own Obsolescence

How to Quit without Being a Quitter

You Came the Wrong Way to St Louis

What Are Schools For?

News DSMW - July 3, 2020
0
President Donald Trump is linking the rise in coronavirus cases in the U.S. directly to increased testing. Trump made his comments in a Thursday night tweet. He wrote: "There is a rise in Coronavirus cases because our testing is so massive and so good, far bigger and better......