With just one day to go before the U.S. presidential election, the race between President Donald Trump and former vice president Joe Biden could be tightening more than polls are letting on, at least according to nonprofit online prediction market PredictIt–one of the only platforms cleared by the CFTC to allow domestic betting on U.S. political outcomes. 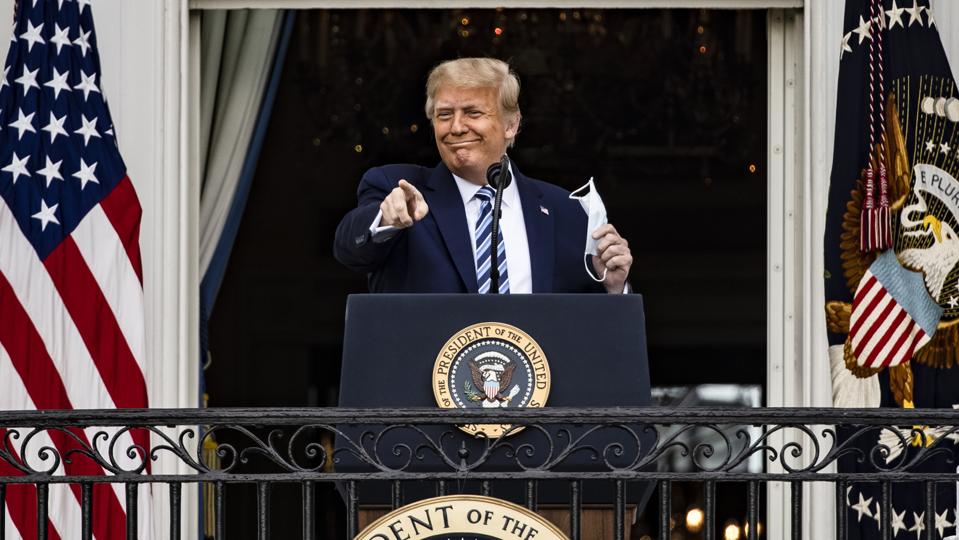 U.S. President Donald Trump addresses a rally in support of law and order on the South Lawn of the … [+] White House on October 10.

As of Monday, PredictIt placed the odds of Biden winning the election at about 63%, down from near-70% highs earlier this month as Trump’s odds inch up to roughly 40%.

The implied probability of a Democratic sweep, on the other hand, has remained virtually flat at 60% over the past month, according to a Goldman Sachs analysis of PredictIt data.

Regular polls are incredibly more bullish on Biden: Polling website FiveThirtyEight places the odds of Biden winning on the eve of election at a staggering 90%.

Key swing states–where polls show Biden’s lead is much smaller than the national average–are largely responsible for the disparity between polls and prediction markets: In states where polls are essentially tied, prediction markets favor Trump with about a 65% chance of winning, Goldman said in a recent note to clients.

PredictIt, for example, showed North Carolina–one of the Sun Belt battlegrounds (where polls show Biden ahead by 2.1 points)–flipping to Trump over the past 24 hours; another swing state where Trump leads PredictIt odds while lagging in the polls is Georgia–a win in both states could push Trump to an electoral victory.

The growing divergence between prediction markets and polls could be boiled down to two likely factors, adds Goldman: The surge in mail-in voting, for one, makes “predicting turnout more difficult,” and, second, market observers could simply be wary that election results once again diverge from state-level polling data–which was overwhelmingly the case in the 2016 presidential election.

Former Vice President Biden leads national polls by roughly 9 percentage points, per Goldman, nearly twice as much as former presidential nominee Hillary Clinton’s lead in the days leading up to the 2016 election. At the time, PredictIt had the odds of Hillary Clinton winning at about 80%. According to Goldman, “state-level polls from presidential elections from 1992 to 2016 show that roughly a week before the election, a candidate leading with a [margin of two percentage points] won that state around three times out of four.” But that wasn’t the case in 2016, which Goldman notes accounted for a third of all state-level missed calls since 2000.

“Prediction markets suggest the election outcome is still highly uncertain, implying just over a 60% chance that Biden will win the Electoral College,” a team of Goldman analysts said in a recent note, citing polls that are much closer in the key swing states than they are nationally. “The upshot is that while financial market participants are taking a view on the election outcome, the implied probabilities suggest that they, like prediction markets, are taking a somewhat more cautious view of the publicly available polling data.”

The most popular Senate prediction market on PredictIt–with nearly 10 million bets–suggests that Democrats will most likely gain four Senate seats as a result of the Tuesday elections, pushing them to a majority with 51 seats total.

A blue wave election outcome–which is still the most likely result according to both polls and prediction markets–could support stocks exposed to energy efficiency, smart mobility and renewables given Biden’s green agenda, noted UBS Chief Investment Officer Mark Haefele in a note to clients earlier this month. But more importantly, Biden’s widening lead, coupled with the increased odds of a Democrat-controlled Senate, would make it easier to pass legislation, thus hiking up the chances that a substantial stimulus bill could eventually come to fruition.

$300 million. That’s at least how much gamblers have wagered on the U.S. election using U.K.-based Betfair Exchange, marking the platform’s single largest betting event of all time.

Today’s 2020 Election Polls: Biden Has A Cushion In Pennsylvania—But It’s Not Much (Forbes)

Bettors Have Wagered A Record $300 Million On Trump vs. Biden With $500 Million Expected (Forbes)

Prediction Markets Now Factor In 65% Chance Of Biden Victory. Here’s What That Means For Stocks And The Economy (Forbes)