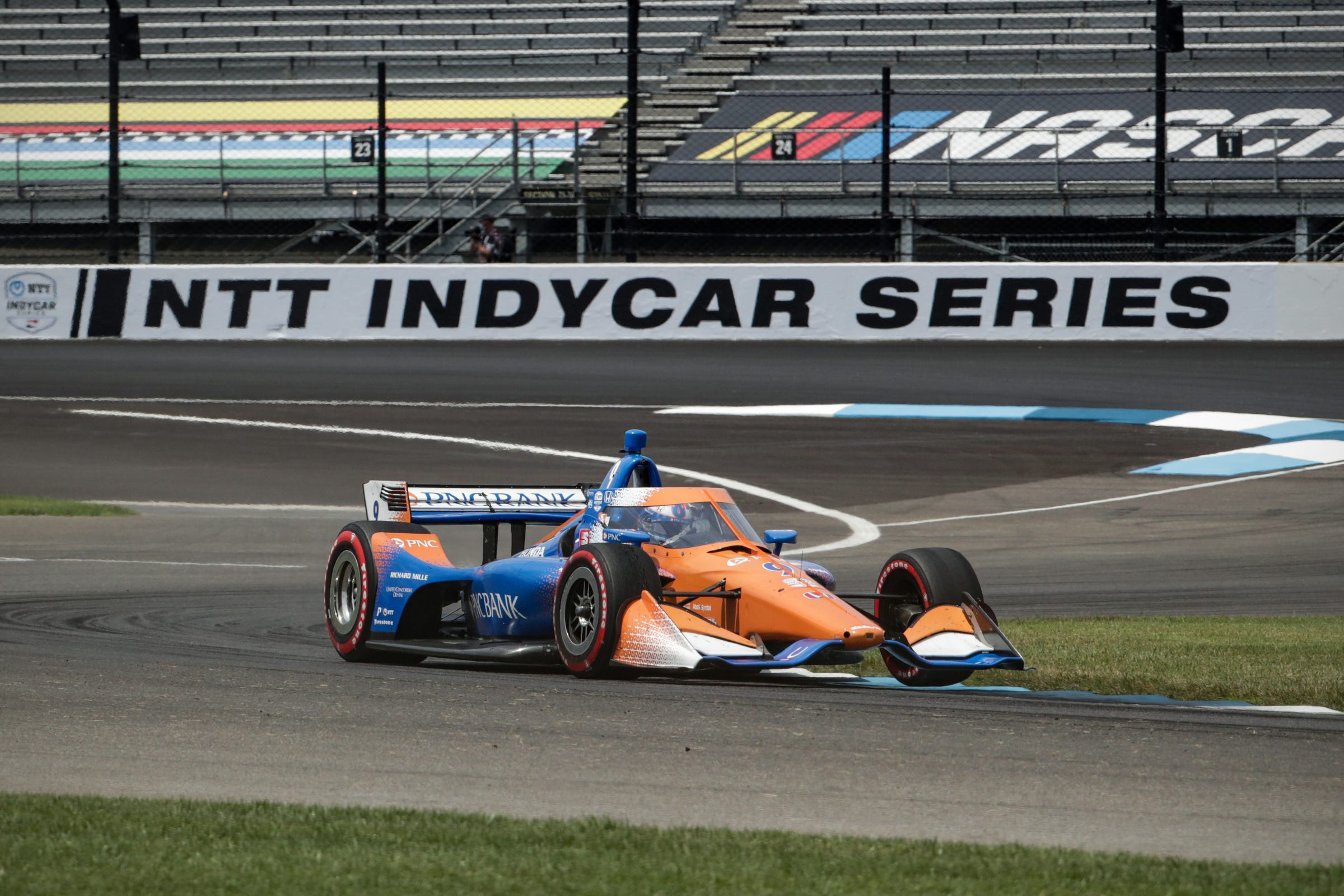 INDIANAPOLIS – The Pagoda was mostly empty. You can imagine how weird that is, because you’ve seen the thing. It’s nine levels of green-tinted windows overlooking the Indianapolis Motor Speedway finish line, with fans and sponsors and other dignitaries leaning into the glass, watching the spectacle below.

There were no sponsors on Saturday for the GMR Grand Prix. No fans, no dignitaries, nobody. Those green-tinted windows were overlooking the speedway with a vacant stare.

But then, there wasn’t much of a spectacle below, either. Well, other than Scott Dixon. He’s a spectacle unto himself, sort of like the math whiz is a spectacle in seventh-grade algebra. You know, the little jerk in the front row who sets the curve? That was Scott Dixon on Saturday, minus the “little jerk” part. He’s one of the nicest guys in the sport, but not when he gets behind a wheel and grinds the rest of the field into dust, as he did on Saturday.

This is a race where cars go more than 125 mph and still, after 80 laps and nearly 200 miles, are separated at the end by a second or two. Except for when something like this happens, something like Scott Dixon having too much skill and too much strategy for the rest of the field.

Know what? I’m almost glad there was nobody here to see the 2020 GMR Grand Prix.

The grandstands were completely empty. You can imagine how weird that is, and please, enough with the Grand Prix attendance jokes. Yes, it’s true, this race never draws all that well. A good crowd in recent years has been 40,000 people, and in a facility that seats roughly 250,000, that makes the grandstands look empty.

This was different. The grandstands were empty. Advertising tarps covered huge swaths of empty seats: Busch, Pennzoil and the biggest tarp this side of the Mississippi, declaring this place “THE RACING CAPITAL OF THE WORLD.”

Off in the distance, but still in the infield of this leviathan of a speedway, the Brickyard Crossing golf course was empty, other than the trio of golf carts perched on the course’s highest spot. Somebody was watching this race after all, watching it from those golf cars. Official attendance of the 2020 GMR Grand Prix: six.

Everyone else, here’s what you missed:

That’s how easy Scott Dixon made this look. By the second half of the race, every lap for Dixon was a gimme – two dribbles, bend the knees, flick the wrist … swish – with the rest of the field needing Dixon to bounce the ball off his foot or stall his car coming out of his final pit stop, something silly and impossible for a driver of this stature.

Will Power stalled his car coming out of his final pit stop, on Lap 58, just the perfect cap to a miserable day for Power, who started the race on the pole. Power is one of the greatest active drivers in IndyCar, probably No. 2 behind the man himself, Scott Dixon, but it was Power who stalled with 22 laps to go, like a 15-year-old driving a stick shift for the first time. Ease the clutch back and hit the gas … no, Will, slower on the clutch, and give it more gas! More gas, more gas …

It was Dixon who handed Power his first miserable moment on Lap 10, when the New Zealander they call “The Iceman” came in for an early pit stop and melted everything everybody had been thinking about this race. It’s the tires, see. There are two kinds of tires for this race, a harder “black” tire and a softer, more responsive “red” tire. The reds go faster, but they wear out faster, too. Teams must use each compound for at least two laps.

Reds, for example, are what drivers use for qualifying. They’re faster than the blacks, and are best used in shorter explosions of speed. But those qualifying reds go back into the weekend rotation. Scuffed reds, they’re called. Until they’re used, brand-new tires are called sticker tires. Still with me?

OK, keep up. Because Scott Dixon is about to take off.

Great day for a race but no fans

Shame of it is, the day was perfect for watching a race. It was hotter than hell, but no rain at noon, and no real threat of rain for the rest of the race. Downtown Indianapolis was visible in the distance on this hazy day, blue skies with the wispy, subtle suggestion of clouds.

No suggestion of fans, though, other than six people on golf carts. Imagine driving into Speedway on a race day – yes, even a Grand Prix race day – and having to tap your brakes only for red lights and stop signs. No traffic, no cars, no people, nothing.

Inside the Speedway – and that’s where the media was able to park for a change, inside the Speedway, winding through the infield and past the garage area and the trailers, all the way to the media center – IMS officials tried to make it look like business as usual. And this is, after all, a business, which is why the 92-foot, 2-inch electronic scoring pylon near the finish line was hyping Mountain Dew and screaming “Do the Dew!” You’ve never seen so much electricity used so fruitlessly, that pylon reduced by the coronavirus pandemic to 92 feet, 2 inches of electronic tree: lighting up but being seen by nobody in this empty forest.

What did you miss? The first six or eight drivers taking off in their red tires. Poor Scott Dixon, who started seventh, was trying to keep up on his black tires, but it looked as if his strategy was a stupid one. Black tires? Who starts this race on black tires? Will Power took off in his sticker reds and was leading comfortably after 10 laps when Scott Dixon admitted defeat and shuffled into the pits for new tires.

… that won him the race.

Dixon comes roaring out of the pits in his sticker reds, and at this point the reds on the cars of Power and other leaders are starting to wear away. Power, Graham Rahal and a handful of others knew it would happen, that their cars would slow after 10 or 15 laps. They were on a two-pit strategy – two pit stops over the course of 80 laps – and they were putting distance between themselves and the field.

He’s on those sticker reds starting on Lap 11, and he’s reeling in cars. Picture Carl Lewis, back when he was the fastest man in the world, giving middle-school sprinters a 20-meter lead and then reeling them in. Like that.

Within a few laps, Dixon has bent the field to his will, forcing several drivers who started the race on a two-stop strategy to switch to a three-stop strategy. Dixon was on the same three-stop schedule, but he figured it out sooner than everybody else. The race was 10 laps old, but it was over, as long as one thing happened …

Rookie Oliver Askew went into a curve and got loose in his red tires, a fluke that happens, and spun into the wall. The race goes yellow, bunching the field, forcing Power, Josef Newgarden and Graham Rahal to add a third pit stop. Just 15 laps earlier, Rahal had a social-distancing lead of almost 15 seconds. Now he’s bunched into the pack, then stopping to pit.

“Definitely a little bit of luck there,” Dixon was saying of the Lap 35 yellow that catapulted him to victory.

Here comes The Iceman, and on Lap 48 with Rahal’s tires wearing down, Dixon roars past him like one of those jerks on I-465 going 90 mph in a 55-mph zone. Only, how many times do I have to tell you? Dixon isn’t a jerk! And he wasn’t going 90, either. More like 125 mph, with his mandatory laps on black tires in his rear-view mirror.

Rahal put on his sticker reds for the final 25 laps, but his focus was holding off Simon Pagenaud for second place, allowing Dixon – now on scuffed reds – to win by 20 seconds.

“That’s life,” Rahal said of an 80-lap race that turned on a yellow flag in Lap 35. “Strategy has burnt me before, and it’s helped us a lot before. We’ve won races because of it … (but) I had to do the blacks mid-race on our second stint, and I struggled with them.”

And we saw on Saturday what Scott Dixon can do with a big lead.

Well, some of us saw it. The drivers. The pit crews. A handful of media, and some dudes on golf carts at Brickyard Crossing.

Historically strange day at the speedway. Strange day in a strange year, hurtling toward whatever weirdness comes next.

Find IndyStar columnist Gregg Doyel on Twitter at @GreggDoyelStar or at www.facebook.com/gregg.doyel.