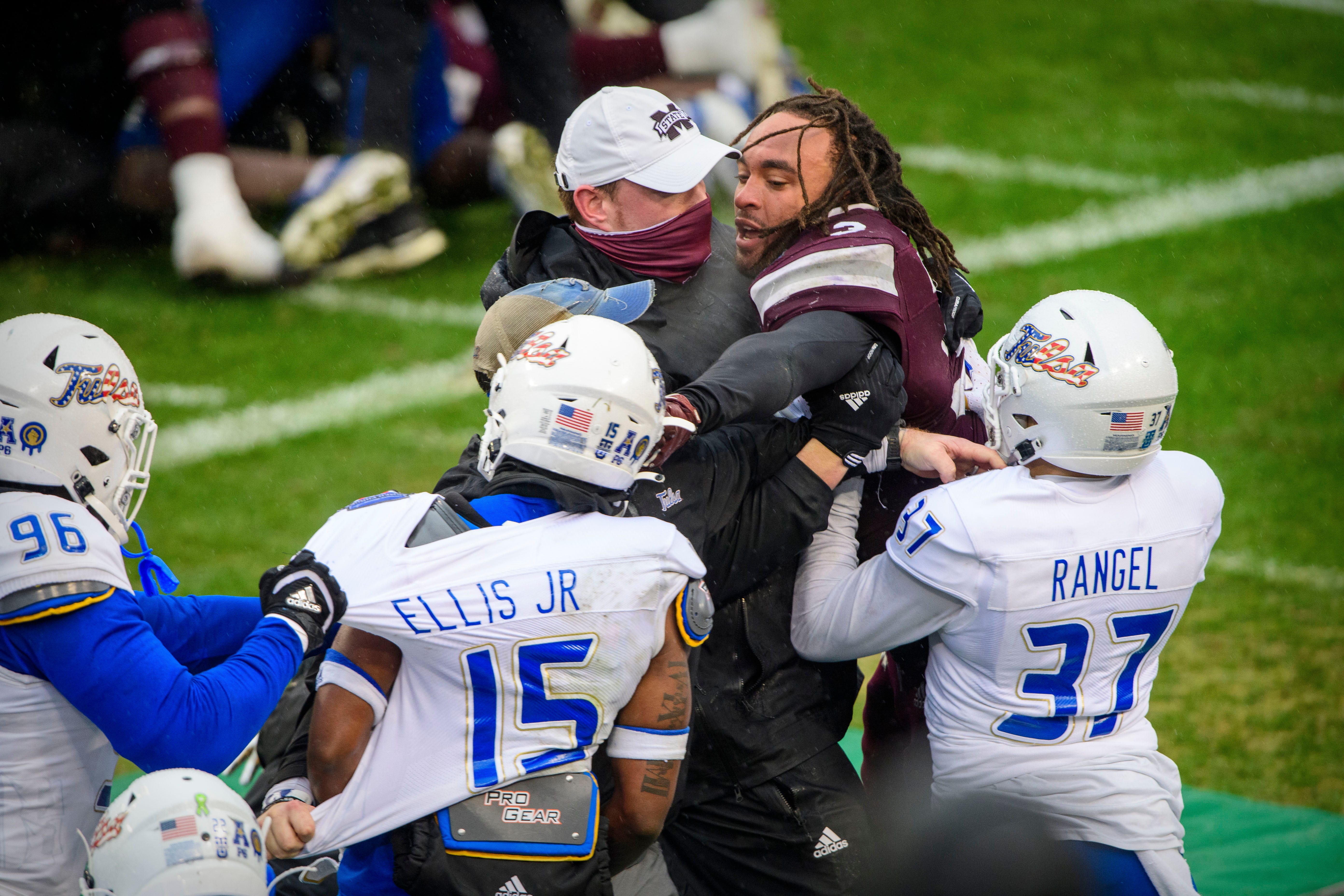 We won’t find much consensus on the best moment of the college football bowl season.

The Liberty-Coastal Carolina, Cincinnati-Georgia and West Virginia-Army thrillers. Your favorites are determined regionally. Within a state. Within a conference.

But from coast to shining sea, we all agree on the worst moment of the bowls. The Tulsa-Mississippi State brawl after — yes, after — the Armed Forces Bowl in Fort Worth on New Year’s Eve. One of the ugliest scenes in college athletics in years. A melee. Slugging. Kicking. Helmets ripped off heads.

The worst part? The celebration of the brawl. Mississippi State’s Malik Heath took to Instagram to brag about the video that shows him kicking a fallen Tulsa player in the head. “Watch how I slam his ass,” Heath narrates.

But I know that everyone involved in the NCAA must bind together and say stop. This isn’t happening again.

“I think it’s gotta come from the rules,” Oklahoma coach Lincoln Riley said. “No coach ever wants to see that happen, no administrator. And no player does either. You get into the emotions and the fire of these games, they get so heated at times.

“Things can get to a tipping point, and I think we’ve got to have very, very strong, strong rules to make sure that people are heavily discouraged from doing that.”

I agree, and it comes from game administration. Trash talking? Celebrations in the face of opponents? Zero-tolerance policy.

We need more Mike Defees. The now-retired Big 12 referee famously penalized every Sooner and every Longhorn before their 2019 game in Dallas. The teams had shown signs of a rumble, and Defee took a fire hose to such attitudes.

Everyone in uniform received an unsportsmanlike conduct penalty; any subsequent unsportsmanlike foul would mean automatic ejection, and at the coin toss, Defee told the captains, “We’re going to play this game with sportsmanship. Are we clear?”

There’s not enough clear in college football. Even Riley earlier this season defended OU safety Brendan Radley-Hiles, who has made a habit of drawing unsportsmanlike penalties with his talking and finger-pointing. Riley said there’s a fine line between aggression and over-aggression. Riley is right. But that’s what sports are all about. Staying on the proper side of that fine line.

Truth is, we’ve let far too much slip. A season ago, we had an awful fight in the Nevada-Las Vegas/Nevada football game. Then a detestable brawl last winter in the Kansas State-Kansas basketball game. Now this.

The Fear of God needs to return to the landscape.

Tulsa coach Philip Montgomery didn’t look great when after the game he talked about how the Golden Hurricane would look out for each other.

“The one thing I’ll say is our program, our guys, we’re a team that’s going to stand up for each and we’re going to battle,” Montgomery said. “We talk about faith, family, football. Family’s going to take care of family.”

Maybe it’s time coaches lost their jobs over it.

In bowl games Friday and Saturday, flags flew much quicker for trash-talking or demonstrations meant to intimidate or inflame the opponent. Too late to help the Armed Forces Bowl, but maybe that’s the kind of rules to which Riley was referring. No tolerance.

“I look at it like targeting,” Riley said. “For a long time, you could argue that rule was over the top. But the one thing right now is you don’t see many targeting penalties anymore. You don’t see dudes getting hit in the head egregiously. They don’t happen very often … You don’t see many egregious ones anymore because the penalty is so, so severe. It has sent a message.

“I think we could have a pretty severe penalty. You’ve seen other leagues, I can think of the NBA specifically, really come down very, very hard on players who have left the bench. Some of the altercations that happened 10 or 15 years ago, you just don’t see much of that anymore. I think you’ve got to make the penalty severe enough that it’s a hot topic and it’s something that even in the most heated moment, it’s in the back of that player’s mind.”

Bingo. Make it the Defee Rule. Start every game with every player just one unsportsmanlike conduct penalty from ejection. You want to chirp at an opponent, you want to stand over a fallen foe instead of helping him up, you want to point fingers? Fine. There are street corners and parking lots where you can do it all day. Knock yourself out.

But it’s not going to happen on a college football field.