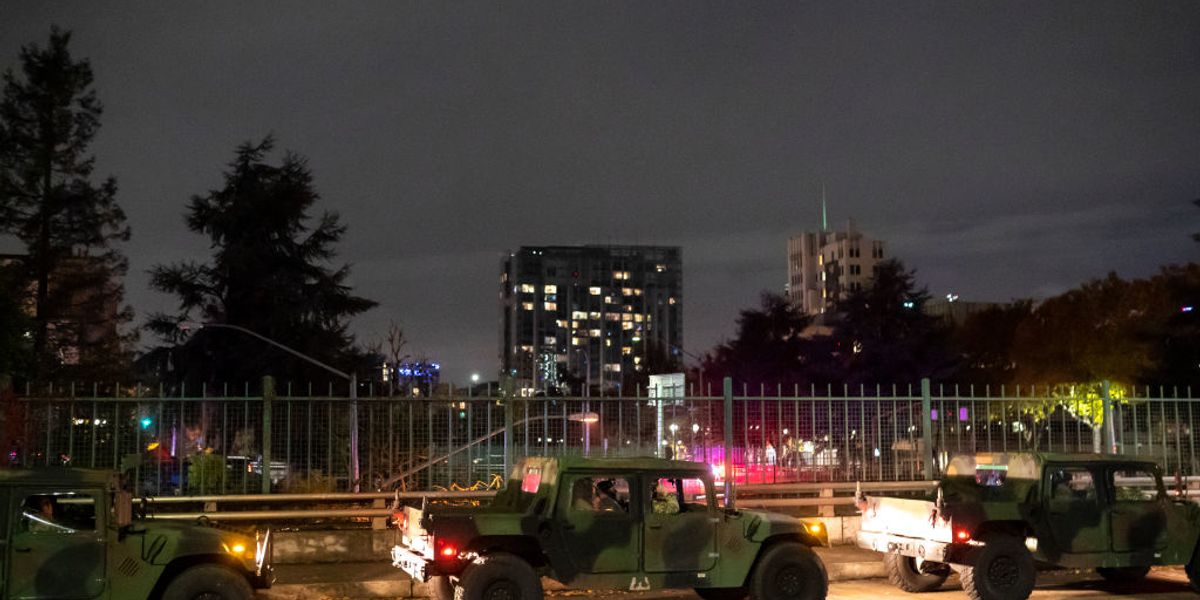 The Oregon National Guard was called into Portland after violent riots erupted in the city on Wednesday night. A riot was declared by the Multnomah County Sheriff’s Office around 7 p.m. after vandals caused damage in the city.

Police said there were two groups that marched through the streets of Portland, where there have been near-nightly protests and riots since George Floyd’s death in late May. Protesters shouted obscenities about Portland’s mayor: “F*** Ted Wheeler!”

Rioters smashed windows, including a business that had a sign with a Martin Luther King Jr. quote that read: “Hate cannot drive out hate; only love can do that.” Protesters dressed in all black burned American flags.

American flag being burned in the same intersection we’ve been at. Officers drove by but did not stay. @fox12oregon https://t.co/kIkQytTqQY

I think some chick yells out at the end of this “You’re racist rapists!” at the Portland Police and National Guard… https://t.co/lotO7Qw26S

After months of violent and dangerous riots in Portland, Oregon Gov. Kate Brown finally activated the National Guard to deal with the riots.

Brown deployed 50 National Guard troops in June, but she promised that they were only in Portland as “support personnel” to “care for the injured, processing arrests, directing traffic – much as they do when they are asked to respond to wildfires.”

On Wednesday, the National Guard was on the ground in Portland to help police control the rioters.

The Unified Command issued a statement on the deployment of the National Guard.

“Widespread violence is occurring in Downtown Portland. In the interest of public safety, Governor Kate Brown, under advice of the Unified Command, has activated the use of the Oregon National Guard to assist local law enforcement in responding to any acts of violence, and to maintain public order and ensure community safety. Guard members are trained in crowd control and will be riding with local response teams. They are dressed in military style garb, which is their uniform Oregon National Guard members are civilian community members helping to protect us. We don’t take this decision lightly. Under the Governor’s Order, we continue to work together and share our resources and information to address any public safety concerns.

The National Guard was activated for the first time tonight in Portland at the #antifa riot. In the past six months… https://t.co/hg7c4AtezY

The National Guard has arrived in downtown Portland https://t.co/RamlpPyWvJ

At least 10 people were arrested, including a man allegedly with a loaded rifle, as well as a man suspected to have thrown a Molotov cocktail at police officers. Police also seized gun magazines, commercial-grade fireworks, hammers, and knives.

These are some of the items law enforcement has seized tonight from custodies. Commercial grade fireworks, hammers,… https://t.co/gbBt5EgZEn

Prior to Wednesday’s violence, Oregon Gov. Kate Brown extended Monday’s executive order calling for the Unified Command, a “joint incident command structure allowing multiple agencies to respond to election-related unrest,” according to KOIN. The order was set to expire at 5 p.m. on Wednesday and will now run through 5 p.m. on Friday.

“Across the United States, elections officials are working hard to ensure that every vote is counted, and it may be several days until we know the results of this election,” Brown said in a press release on Wednesday. “It’s important to trust the process, and the system that has ensured free and fair elections in this country through the decades, even in times of great crisis.”