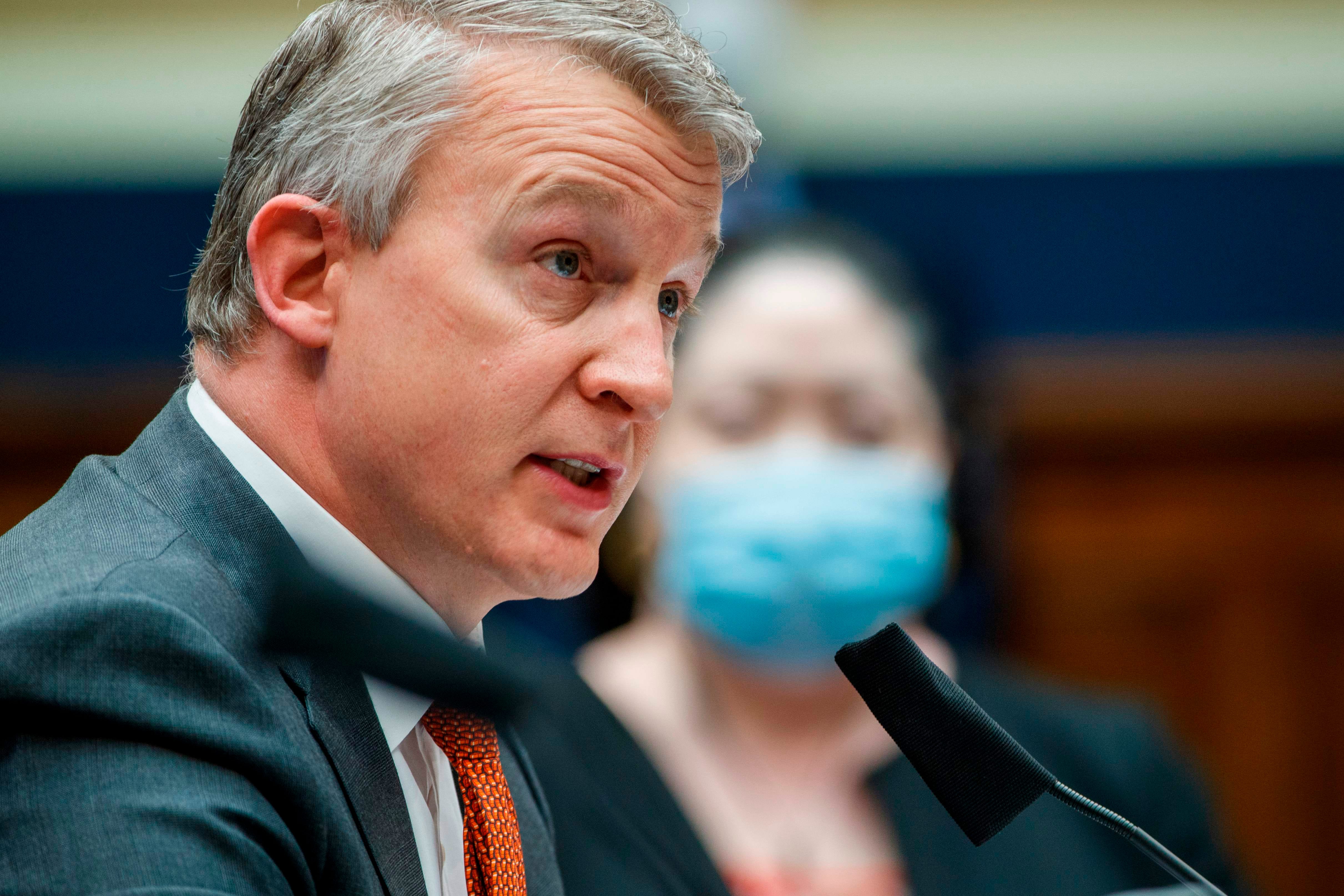 Bright, who said he was unfairly ousted from HHS for raising concerns related to coronavirus, is “nothing more than a really unhappy disgruntled person,” Trump said at the White House as he prepared to leave on a trip to Pennsylvania.

“I don’t know him. I never met. I don’t want to meet him but I watched him, and he looks like an angry, disgruntled employee who, frankly, according to some people, didn’t do a very good job,” Trump said.

HHS Secretary Alex Azar said “everything he is complaining about was achieved” and that his allegations the administration did act adequately on coronavirus “do not hold water.”

Bright: US must ‘unleash’ voices of scientists

Rep. Susan Brooks, a Republican from Indiana, pushed back on a former Health and Human Services official Rick Bright’s testimony that there’s no single leader in charge of the coronavirus response and no master plan.

Brooks pointed out that Vice President Mike Pence is the leader of  the administration’s task force.

“With all due respect, I believe there is that coordination,” Brooks said. She said she’s “very, very concerned” about the impression that there’s been no plan.

“I want the American people to know a lot of folks over a long period of time have been focused and yet we still didn’t have enough,” she said. “Across the board, over many administrations, we did not do enough.”

Brooks said the public shouldn’t get the impression that Bright just raised the alarm in January when he had been at the table with others for years when action wasn’t taken.

Bright responded that pandemic plans had been prepared but were not pulled out in January and put in place by a “strong leader.”

“We need to unleash the voices of the scientists in our public health system so they can be heard,” he also said.

‘I believe lives were lost’

Dr. Rick Bright, an immunologist who said he was unfairly ousted from the Department of Health and Human Services, described a Feb. 7 meeting with department leadership at which he urged the need for more N-95 masks.

Higher-ups didn’t believe there was a critical shortage, he said. And they told him if one develops, the Centers for Disease Control could change its guidelines on who should wear the masks so that there would be enough for health care workers.

“My response was, I cannot believe you can sit and say that with a straight face,” Bright said. “Lives were endangered and I believe lives were lost.”

Because the United States waited too long, he continued, the nation had to import masks from other countries that weren’t necessarily manufactured under the same standards. As a result, Bright testified, some are only 30% effective.

Health care workers think they’re being protected, he said, “and they’re not.”

Bright wore an American flag pin on his suit jacket. Hand sanitizer and disinfectant wipes sat next to his water bottle at his right elbow. The face mask Bright wore into the hearing room and took off before he began speaking lay on the witness table.

A swab shortage in the national stockpile

Rick Bright, an immunologist who said he was unfairly ousted from the Department of Health and Human Services, said he was “quite alarmed” to learn that the United States would have a shortage of swabs and even more surprised to learn that there weren’t any in the national stockpile.

Bright said he needed HHS Secretary Alex Azar to request help from the Defense Department to fly back swabs and other needed supplies from overseas. But when he and a colleague tried to raise the issue at a senior leadership meeting with Robert Kadlec, the assistant Secretary for Emergency Preparedness and Response, Kadlec said he didn’t want to talk about swabs.

“We were rebuffed,” Bright said.

Instead, Bright said, he reached out to White House trade adviser Peter Navarro who quickly contacted the Defense Departments. Flights were started in two days.

The committee invited Azar, Kadlec and Navarro to testify but they declined. All are mentioned extensively in Bright’s whistleblower complaint.

Bright says he’s concerned US moving too fast on vaccine

Former immunologist at the Department of Health and Human Services Rick Bright expressed concern that the nation is rushing too quickly on a vaccine for coronavirus, risking a vaccine being used before a full assessment is made of its efficacy.

He called the hope that a vaccine could be available in 12 to 18 months an “aggressive schedule.”

“And I think it will take longer,” he said.

Vaccines normally take up to a decade. They can be done faster in an emergency but a 12-to-18-month schedule would require everything to go perfectly, he added.

Critical steps were not taken in time in the early stages of the coronavirus outbreak, Rick Bright, an immunologist who says he was unfairly ousted from the Department of Health and Human Services, told a House panel Thursday.

Bright said he’d known for some time that the nation’s stockpile of supplies was insufficient and pushed urgently in January to ramp up production of masks, respirators and other supplies.

“Those alarms were not responded to,” he told a subcommittee of the House Energy and Commerce Committee.

Bright also said he unsuccessfully tried to increase the availability of Remdesivir, a drug that has shown a modest benefit for patients with COVID-19.

“I was told that my urgings were causing a commotion and I was removed from those meetings.”

Bright said the window is closing to address the pandemic because the nation still lacks a standard, centralized coordinated plan.

For example, he said, doses of Remdesivir are still limited.

“And we don’t have a plan for how to scale up the drug,” Bright said.

An immunologist who says he was unfairly ousted from the Department of Health and Human Services plans to tell a House panel on Thursday that if the U.S. does not develop a plan to address a second wave of the virus, the country will experience the “darkest winter in modern history.”

Rick Bright, who was removed last month from his position as the director of HHS’ Biomedical Advanced Research and Development Authority (BARDA), is scheduled to testify before the House Energy and Commerce Committee at a hearing titled, “Protecting Scientific Integrity in the COVID-19 Response.”

“Our window of opportunity is closing. If we fail to develop a national coordinated response, based in science, I fear the pandemic will get far worse and be prolonged, causing unprecedented illness and fatalities,” Bright says in a copy of his planned opening statement to the panel. “While it is terrifying to acknowledge the extent of the challenge that we currently confront, the undeniable fact is there will be a resurgence of the COVID19 this fall, greatly compounding the challenges of seasonal influenza and putting an unprecedented strain on our health care system.”

In his statement, Bright says he began warning in January that the outbreak required the urgent “development of critical medical countermeasures” but “HHS leadership was dismissive about my dire predictions” and “were therefore unwilling to act with the urgency that the situation required.”

As he called for the increased production of medical supplies and personal protective equipment through February and March, Bright says he “faced hostility and marginalization from HHS officials” and was “cut out of key high-level meetings.”

Bright said he was finally removed from BARDA when he “resisted efforts to promote and enable broad access to an unproven drug, chloroquine, to the American people without transparent information on the potential health risks.”

President Donald Trump publicly touted the rumored efficacy of chloroquine and hydroxychloroquine as a potential “game-changer” in the fight against the virus even as Dr. Anthony Fauci, director of the National Institute of Allergy and Infectious Diseases, said there was only “anecdotal” evidence of its success.

Bright has also alleged he was pressured to award government contracts “based on political connections.” On Tuesday, the Office of Special Counsel said in a letter to Bright’s attorneys that based on the information he had shared, there was a “substantial likelihood of wrongdoing.” The special counsel’s office said it was calling on HHS Secretary Alex Azar to open an investigation into Bright’s allegations.

BARDA is designed to aid in securing the nation from chemical, biological, radiological, and nuclear threats, as well as from pandemic influenza and emerging infectious diseases, according to the HHS website. Part of BARDA’s work against COVID-19 includes assisting in the development of a vaccine.

“Sidelining me in the middle of this pandemic and placing politics and cronyism ahead of science puts lives at risk and stunts national efforts to safely and effectively address this urgent public health crisis,” Bright said in a statement last month calling for an Inspector General’s investigation.

Trump paradoxically said in a tweet ahead of Bright’s testimony that he had both never heard of him, and that people told him Bright was not held in high regard by his colleagues.

“I don’t know the so-called Whistleblower Rick Bright, never met him or even heard of him, but to me he is a disgruntled employee, not liked or respected by people I spoke to and who, with his attitude, should no longer be working for our government!” Trump said.

Prior to his reassignment, Bright had received an “outstanding” performance review.

In his statement to lawmakers on Thursday, Bright said he was testifying “because science – not politics or cronyism – must lead the way to combat this deadly virus.”

The coronavirus has infected nearly 1.4 million people in the U.S. and has killed more than 84,000.

Bright’s testimony comes two days after Fauci warned of increased “suffering and death” if states begin to lift their lockdown measures, which aim to slow the spread of the disease, too quickly

“As I reflect on the past few months of this outbreak, it is painfully clear that we were not as prepared as we should have been,” Bright says. “We missed early warning signals and we forgot important pages from our pandemic playbook. There will be plenty of time to identify gaps for improvement. For now, we need to focus on getting things right going forward.”

Bright outlines several steps he believes are necessary to take to minimize the damage before the cure he believes will come is discovered. He called for a public education campaign on mitigation techniques such as handwashing, social distancing and wearing masks, adding that “leaders must lead by modeling the behavior”; increased production of medical supplies and PPE; a national distribution system for those supplies that stops “state vs. state competition”; and a national testing strategy.”

“We will either be remembered for what we did or for what we failed to do to address this crisis,” Bright concludes.