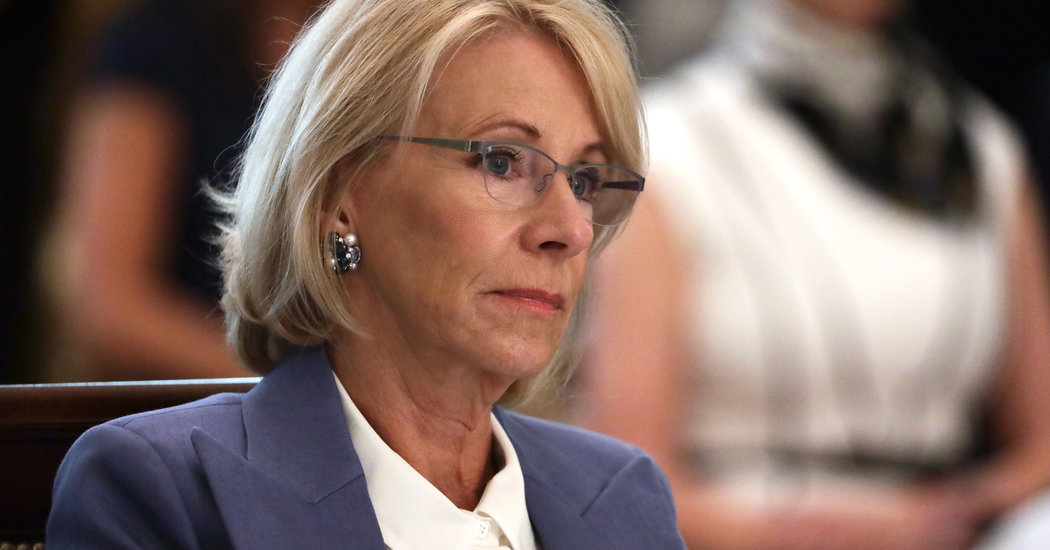 The veto will allow stringent rules for students seeking loan forgiveness to take effect on July 1. The rules toughen standards established under the Obama administration for student borrowers seeking to prove their colleges defrauded them and to have their federal loans erased. Even if some borrowers can show they were victims of unscrupulous universities, they could be denied relief unless they can prove their earnings have been adversely affected.

The resolution “sought to reimpose an Obama-era regulation that defined educational fraud so broadly that it threatened to paralyze the nation’s system of higher education,” Mr. Trump said in his veto statement. “The Department of Education’s rule strikes a better balance, protecting students’ rights to recover from schools that defraud them while foreclosing frivolous lawsuits.” It was the president’s eighth veto.

The resolution put Mr. Trump in a difficult political position. The veto saves Ms. DeVos from an embarrassing rebuke by her boss, but it places the president at odds with dozens of veterans’ groups that helped persuade 10 Republican senators to vote to overturn a major domestic policy of the Trump administration. Veterans groups said the rule failed to protect military service members who have long been the targets of predatory tactics by colleges because of their lucrative G.I. benefits.

“President Trump’s veto of my bipartisan bill to help our veterans was a victory for Education Secretary DeVos and the fraud merchants at the for-profit colleges,” said Senator Richard J. Durbin, Democrat of Illinois, who sponsored the resolution in the Senate. “My question to the president: In four days, did you forget those flag-waving Memorial Day speeches as you vetoed a bill the veterans were begging for?”

In a statement, Ms. Pelosi called the rule “an act of staggering cruelty.”

She said the House would soon vote to overturn the veto, but rounding up two-thirds of the House and Senate would be almost impossible.

“The House and Senate, on a bipartisan basis, firmly stood with our students and veterans to reject the administration’s cruel and dangerous decision,” Ms. Pelosi said. “It is sad that the president rejected the will of the Congress and the country with his veto.”

The news of the veto left groups despondent.

Only hours beforehand, the American Legion, a nonpartisan group that represents two million members, pleaded with the president to sign the resolution, saying that Ms. DeVos’s rule would make it “nearly impossible” for cheated veterans to use it.

Ms. DeVos’s changes raised the bar for borrower relief claims, requiring applicants to individually prove that a school knowingly misled them and, even if students were bilked, that they were financially harmed by the deception. They also set a three-year deadline on claims.

“Veterans have been aggressively targeted due to their service to our country,” the legion’s national commander, James W. Oxford, wrote in a statement on Friday. “Student veterans are a tempting target for certain online and for-profit schools to mislead with deceptive promises, while offering degrees and certificates of little-to-no value.”

Representative Susie Lee, Democrat of Nevada, who sponsored the resolution in the House, said that “the fight for our students and veterans is far from over.”

“It’s clear the 2019 rule will weaken both protections for students and oversight of shady schools, while forcing taxpayers to foot the bill for the fraudulent actions of a few bad actors,” she said.

The little-known loan forgiveness rule, called “borrower defense to repayment” was the main vehicle the Obama administration used to grant debt relief to tens of thousands of students affected by the collapse of two large for-profit college chains, Corinthian Colleges and ITT Tech, in 2015 and 2016.

The Education Department’s inspector general also found that the Obama administration had a flimsy infrastructure for processing claims, though its review did not find any errors in granting debt relief.

Ms. DeVos has faced fierce criticism and lawsuits over how she had tried to overhaul the claims process, and the department amassed a backlog of applications while she wrote the new rule, which was finished in September.

The department said the new rule would save taxpayers about $11 billion over the next decade.

“This administration is committed to protecting all student from fraud and holding all schools accountable when they fail their students,” said Angela L. Morabito, a spokeswoman for the department. “This administration’s rule does just that, despite false claims from many corners. The secretary is thankful to the president for his leadership on this issue.”