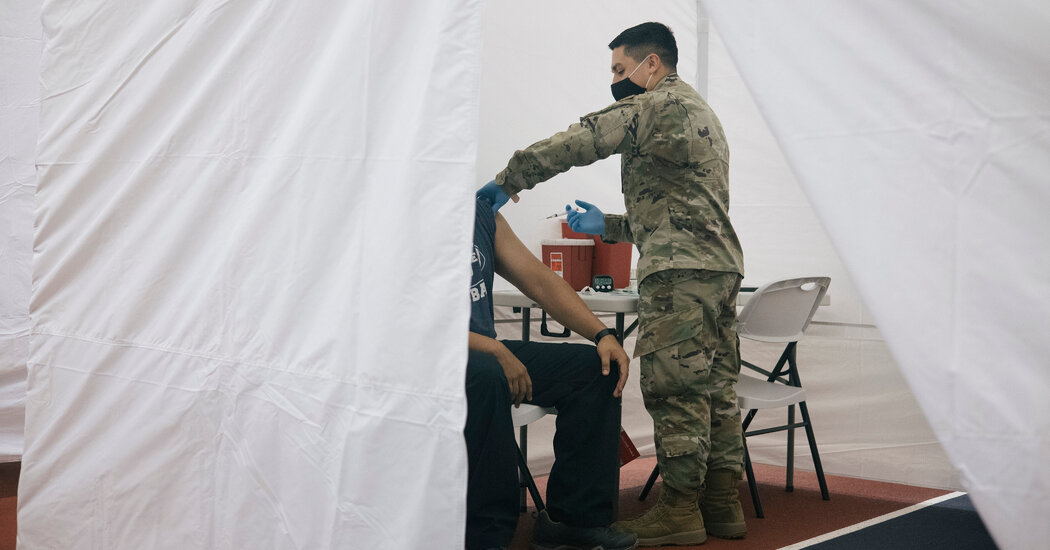 LANDOVER, Md. — As tens of thousands of his National Guard colleagues descended on the nation’s capital to ensure the peaceful transfer of presidential power, 10 miles up the road, Emmanuel Alfaro was doing what he viewed as the pinnacle of his career in the Guard: administering Covid-19 vaccines to his fellow citizens.

“It’s a highlight, being able to come out and help the public out,” said Mr. Alfaro, a senior airman and medic with the 175th Air National Guard, whose normal duties are helping at health care centers in Maryland.

As the pandemic continues to rage nationwide and a vaccine program to control it struggles, governors are increasingly turning to the National Guard to help expedite the process. At least 16 states and territories are using Guard members to give shots, drawing on doctors, nurses, medics and others skilled in injections.

Many more states are using thousands more Guard personnel for logistical tasks, like putting together vaccine kits and moving them around, logging in patients and controlling lines at state vaccination sites. In West Virginia, for example, about 100 Guard troops are assisting with distribution across the state.

“We are a logistical operation here,” said Maj. Holli Nelson, a spokeswoman for the Guard there. “That is what the military does best.”

The growing presence of the Guard is a stark reminder that even as the country reels from the attack on the Capitol last week, a pandemic continues to roil all the states, which are struggling to expedite a complex vaccine program with no modern precedent.

Since January of last year, 1 in 14 people who live in the United States have been infected with the coronavirus, and at least 1 in 862 have died. States like California and Arizona, with some of the highest number of infections in the nation, are contending with exhaustion among health care workers and inundations across their medical centers.

“States are naturally looking at alternative ways to get out the limited supply of vaccines,” said Claire Hannan, the executive director of the Association of Immunization Managers. “We are seeing more and more states using the National Guard and thinking bigger.”

In Maryland, Gov. Larry Hogan originally planned to disseminate vaccines largely through private health care providers and drugstore chains, setting up state-run health care clinics later. Last week, realizing that the private sector was unable to ramp up operations as quickly as he had hoped, Mr. Hogan turned to 140 Maryland National Guard members to help with pop-up sites in two counties and will be adding six more next week to help county and state health officials.

States have struggled to get the roughly 30 million doses of vaccines released by the Trump administration to Americans. The desire for vaccines has greatly outstripped supply, even as some Americans who qualified for an early dose have rejected them, causing the federal government and states to adjust their guidelines on who can receive them first.

While the exact order of vaccine recipients may vary by state, most will likely put medical workers and residents of long-term care facilities first. If you want to understand how this decision is getting made, this article will help.

Life will return to normal only when society as a whole gains enough protection against the coronavirus. Once countries authorize a vaccine, they’ll only be able to vaccinate a few percent of their citizens at most in the first couple months. The unvaccinated majority will still remain vulnerable to getting infected. A growing number of coronavirus vaccines are showing robust protection against becoming sick. But it’s also possible for people to spread the virus without even knowing they’re infected because they experience only mild symptoms or none at all. Scientists don’t yet know if the vaccines also block the transmission of the coronavirus. So for the time being, even vaccinated people will need to wear masks, avoid indoor crowds, and so on. Once enough people get vaccinated, it will become very difficult for the coronavirus to find vulnerable people to infect. Depending on how quickly we as a society achieve that goal, life might start approaching something like normal by the fall 2021.

Yes, but not forever. The two vaccines that will potentially get authorized this month clearly protect people from getting sick with Covid-19. But the clinical trials that delivered these results were not designed to determine whether vaccinated people could still spread the coronavirus without developing symptoms. That remains a possibility. We know that people who are naturally infected by the coronavirus can spread it while they’re not experiencing any cough or other symptoms. Researchers will be intensely studying this question as the vaccines roll out. In the meantime, even vaccinated people will need to think of themselves as possible spreaders.

The Pfizer and BioNTech vaccine is delivered as a shot in the arm, like other typical vaccines. The injection won’t be any different from ones you’ve gotten before. Tens of thousands of people have already received the vaccines, and none of them have reported any serious health problems. But some of them have felt short-lived discomfort, including aches and flu-like symptoms that typically last a day. It’s possible that people may need to plan to take a day off work or school after the second shot. While these experiences aren’t pleasant, they are a good sign: they are the result of your own immune system encountering the vaccine and mounting a potent response that will provide long-lasting immunity.

No. The vaccines from Moderna and Pfizer use a genetic molecule to prime the immune system. That molecule, known as mRNA, is eventually destroyed by the body. The mRNA is packaged in an oily bubble that can fuse to a cell, allowing the molecule to slip in. The cell uses the mRNA to make proteins from the coronavirus, which can stimulate the immune system. At any moment, each of our cells may contain hundreds of thousands of mRNA molecules, which they produce in order to make proteins of their own. Once those proteins are made, our cells then shred the mRNA with special enzymes. The mRNA molecules our cells make can only survive a matter of minutes. The mRNA in vaccines is engineered to withstand the cell’s enzymes a bit longer, so that the cells can make extra virus proteins and prompt a stronger immune response. But the mRNA can only last for a few days at most before they are destroyed.

Registration websites have crashed. Endless waits on phone lines have frustrated people seeking appointments or simple information. And some private health care centers have been unable to work through bureaucracies to get doses to the right people, at times wasting opened vaccines or giving them to people far down the priority list. In Florida, older residents camped on lawn chairs outside centers waiting for their shots.

State health department officials say they are happy to have the Guard’s ability to put up tents in 15 minutes and turn to a bevy of skilled personnel to quickly scale up and change direction when steps like registration are bogged down.

“It was a no-brainer for us,” said C.J. Karamargin, a spokesman for Gov. Doug Ducey of Arizona, a state that deployed the Guard immediately after receiving its vaccine supply in December. “This crisis has seen the largest mobilization of the Arizona Guard since World War II.”

The Guard was called on to assist with personal protective equipment and testing, and “they hit it out of the park,” Mr. Karamargin said.

The federal government currently will reimburse states — many of them struggling from large drops in tax revenues — for only 75 percent of their National Guard costs associated with coronavirus relief.

At one point, the Trump administration gave 100 percent reimbursements to Florida and Texas, and governments from both parties say they intend to press the Biden administration to make whole on this front.

“North Carolina has been clear we would like to get to 100 percent reimbursement,” said Sadie Weiner a spokeswoman for Gov. Roy Cooper. On Monday, the state’s first teams of 75 Guard personnel in two cities began to “stick, plunge and pull,” said Lt. Col. Matt DeVivo, a spokesman for the Guard. They expect to greatly increase their sites over the next few weeks.

Some heath care experts were skeptical that the Guard could keep up when vaccine allotments became larger.

“All hands on deck are important,” said Dr. Georges C. Benjamin, the executive director of the American Public Health Association. “But I think you have to be realistic, though, about the Guard’s ability. We have to be careful that we are not expecting them to bring more medical assets than they can to the table. Guard members are working in hospitals and pharmacies already detailed to provide services for Covid.”

Guard officials say they have the capacity to manage the need.

While the Defense Department has frequently boasted about its role in Operation Warp Speed, the federal vaccine effort, Pentagon officials have said that active-duty troops would not be administering shots.

Further, many officials are mindful of a history of the United States conducting unethical medical experiments on Black Americans and general distrust of government. Having uniformed Guard troops give shots was something that could require extra assurances, officials said.

“I do think that is something we really need to pay attention to,” said Ms. Hannan of the Association of Immunization Managers. “I don’t know if we understand all the questions around that. But the trust and confidence in the vaccine is in a different place than it was in July and August, when there were strong concerns about the military delivering the vaccine.”

This week, uniformed Guard troops wove among state and local health officials around the sporting center in Landover, Md., to get to about a dozen white tents to give residents — largely emergency medical workers — their shots.

Taylor Brown, an official with the Office of Emergency Management in Prince George’s County, Md., looked on with approval; the county has been one of the hardest hit in the state.

“Thank goodness they are here,” she said. “The more the merrier, really.”