WASHINGTON — When Mike Griffin, a black community organizer in Minneapolis, took to the streets in protest, he was grieving for two black men taken during the turmoil convulsing the country: George Floyd, who died after gasping for air under the knee of a white police officer, and his own godfather, who succumbed to Covid-19.

“I’m just as likely to die from a cop as I am from Covid,” he said.

In Providence, R.I., graduate students and alumni of color at the Brown University School of Public Health are demanding their professors take a strong stand against police violence — and direct research dollars to study it. And in Baltimore, a city still reckoning with the 2015 death of Freddie Gray in police custody, Rajikh Hayes, an activist, said protesters were acutely aware that they were risking exposure to the coronavirus, which is far likelier to kill black people than white people, and of the suffering Covid-19 had caused in their community.

“It’s really a simple question: ‘Am I going to let a disease kill me or am I going to let the system — the police?” he said. “And if something is going to take me out when I don’t have a job, which one do I prefer? Folks who don’t have much else to lose — they understand that this system isn’t built for black people. And that’s why people are in the streets.”

As protests over police brutality continue to roil cities, this is an extraordinary moment of pain for the nation, especially for black Americans who are bearing the brunt of three crises — police violence, crushing unemployment and the deadliest infectious disease threat in a century — that have laid bare longstanding injustice. Public health experts, activists and lawmakers say the triple threat requires a coordinated response.

“These are interrelated crises — the crisis of racism and inequality that is now converging with the crisis of Covid-19,” said Dr. Leana S. Wen, who was Baltimore’s health commissioner when Mr. Gray died, and who testified before Congress on Thursday about racial disparities in the pandemic. “There is no playbook for what you do for addressing public health impacts of civil unrest.”

The precise toll that the coronavirus has taken on people of color remains unknown; not every state collects data. The Trump administration, under pressure from Congress, announced on Thursday new requirements for states to do so. But an analysis of data from 40 states and the District of Columbia, released last month by the nonpartisan APM Research Lab, found black Americans are more than twice as likely as whites, Latinos or Asian-Americans to die from the coronavirus. In some states, the disparity is much greater. 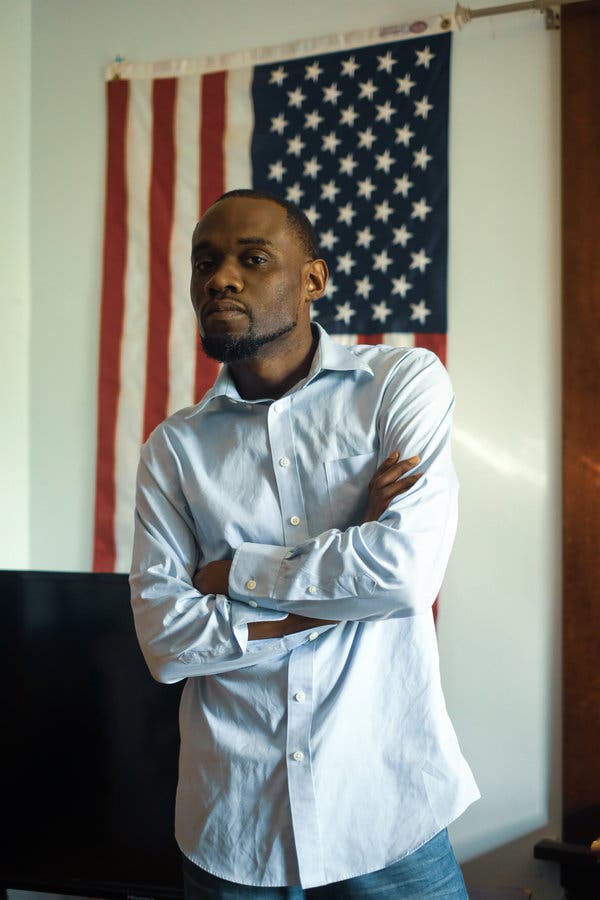 “I’m just as likely to die from a cop as I am from Covid,” said Mike Griffin, a community organizer in Minneapolis.Credit…Laylah Amatullah Barrayn for The New York Times

Devastating job losses are also “hitting black workers and their families especially hard,” according to a recent report by the Economic Policy Institute, a liberal think tank. The unemployment rate for black Americans is 16.8 percent, compared with 12.4 percent for white Americans, according to federal data released Friday. And while the economy is showing hints of recovery, African-Americans are being left out; the black unemployment rate rose slightly in May despite a decline of nearly two points for white workers.

On Capitol Hill, lawmakers are trying to respond. Representative Barbara Lee, Democrat of California, introduced legislation last week calling for the creation of a “truth, racial healing and transformation commission” to examine the legacy of slavery and systemic racism. Black Americans, she said, are suffering “a pandemic within a pandemic.”

Mr. Floyd is a case in point. He died with coronavirus antibodies in his blood, surviving infection only to die in police custody. With so many people protesting Mr. Floyd’s death, many of them black and brown, state and local health officials are bracing for a fresh wave of coronavirus infections.

The mass incarceration of black people has only worsened the pandemic’s heavy toll on minorities. Black Americans are incarcerated in state prisons at five times the rate of whites, according to the Sentencing Project, a Washington advocacy group. Prisons are breeding grounds for the coronavirus, and jails pose a particular threat, because people cycle in and out, spreading disease in their neighborhoods.

“The actual incarceration, housing of people, is only part of it,” said Nickolas Zaller, a public health professor at the University of Arkansas who studies the relationship between health and the criminal justice system. “When people are released, what job opportunities do they have? What is their housing situation? All of these other factors relate back to the current pandemic.”

Trevor Noah, the South African-born host of “The Daily Show,” connected the dots from Amy Cooper, a white woman who falsely accused an African-American bird watcher of threatening her, to the death of Mr. Floyd. All are playing out “against the backdrop,” he said, of a public health crisis that has left Americans of all races frustrated, uncertain and stuck inside.

A protest against racism and police violence on Friday in Brooklyn.Credit…Amir Hamja for The New York Times

For many involved in the protests, the pandemic is deeply personal. Some have lost friends or family members to the coronavirus. Others have lost jobs, or are front-line workers — in grocery stores, hospitals, mass transit systems — putting themselves at risk of infection.

“We’ve had a lot of volunteers come out and just tell us how they’re unable to work right now, and they just can’t sit home and do nothing,” said Jacqueline LaBayne, 23, of Freedom Fighters D.C., which led hundreds in a march to the Capitol in recent days. “Even local businesses, they can’t take customers, and they are donating meals. It’s honestly incredible, the support we’ve gotten in these circumstances, because so many people are affected by Covid.”

In New York, Rashid Shabazz, the chief marketing officer of the online organization Color of Change, displayed symptoms of the coronavirus for several weeks, he said, but was unable to get tested. He said the respiratory illness reminded him of the dying words — “I can’t breathe” — of Mr. Floyd and another victim of police violence, Eric Garner, who was put in an illegal chokehold.

Mr. Shabazz wrote about it in a column for The Root, a black news and opinion site, under the headline “We Can’t Breathe: Covid-19 and Police Injustice are Suffocating Black People.”

At the Brown University School of Public Health, about 20 students and recent graduates in the department of behavioral and social sciences wrote the predominantly white faculty a letter demanding a “response to police brutality and anti-blackness,” citing the coronavirus and the recent killings of three African-Americans: Breonna Taylor, killed by the police in Louisville, Ky., Ahmaud Arbery, shot in South Georgia after being pursued by armed white residents, and Mr. Floyd.

The letter has prompted painful conversations, both students and professors say. Don Operario, a professor, said he convened a meeting of those who wanted to “transform this inner reflection to actual words and action.” School administrators followed up with a statement pledging to “tackle these inequities.”

The students want more than talk. Arjee Restar, who just received her Ph.D., said the group wanted to expose “silence and a lack of investment in anti-black police brutality work.” Ashley Gomez, a doctoral student, said professors who were quick to “adapt their research” to study the coronavirus needed to apply for grants to study racism as well.

Arjee Restar, who just received her Ph.D., said the group wanted to expose “silence and a lack of investment in anti-black police brutality work.”Credit…Philip Keith for The New York Times

At Thursday’s virtual hearing before Congress, witnesses told lawmakers that some of the same forces — distrust of institutions — at work in the pandemic were also fueling the protests against police violence. Dr. Uché Blackstock, a doctor in New York whose company, Advancing Health Equity, works to address racial disparities in health, said many of her black patients who had the coronavirus did not get tested out of either a reluctance to see a doctor or a lack of available testing.

One patient, seeing the protective gear that covered Dr. Blackstock’s skin, asked if she was black, she said, because he wanted to make sure his concerns would be taken seriously. She said she worried that Covid-19 would become a disease of marginalized communities, just as AIDS was in the late 1990s, when white Americans had access to new medicines and health care while many black Americans, with fewer economic resources, did not.

Representative James E. Clyburn of South Carolina, the No. 3 House Democrat, who oversees the select committee examining the federal response to the pandemic and led the hearing, said he intended to make sure that the trillions of dollars Congress appropriated for coronavirus relief was spent “efficiently effectively equitably, and I’m particularly interested in the equitable part of it.” But he also said he intended to “nudge my caucus” to pass legislation banning the police tactics used to detain Mr. Floyd.

After the Baltimore unrest in 2015, Dr. Wen, now a public health professor at George Washington University, declared racism a public health issue, which she said “raised a lot of eyebrows at the time.”

Ms. Lee, the congresswoman, said she intended to ask her county to make such a declaration. Despite the turmoil — “It’s an emotional roller coaster right now,” she said — she feels optimistic.

With so many people protesting the death of George Floyd, state and local health officials are bracing for a fresh wave of coronavirus infections.Credit…Alyssa Schukar for The New York Times