Among certain conservatives, an idea has started to take hold: Could Justice Clarence Thomas ever be the kind of pop-culture icon to his followers that Justice Ruth Bader Ginsburg has become to hers?

Justice Ginsburg, 87, has a book to her name, a touring museum exhibition and a surprise box-office hit in a 2018 documentary about her life. She is tattooed on her fans. Her personal trainer has his own book out. She was appointed to the bench in 1993 but came to realize and embrace this level of celebrity in recent years when her dissents became liberal rallying calls, leading to the nickname homage — and then best-selling book on her life — “The Notorious R.B.G.”

Justice Thomas, the Supreme Court’s most conservative member, is catching up in his own way at age 71.

He was the subject of a recent book, “The Enigma of Clarence Thomas,” which led to a flurry of articles and book reviews on his life and legal thought. A new biographical documentary, made by the conservative filmmaker Michael Pack, airs Monday on PBS. For the project, the justice spoke to filmmakers for 30 hours — an astounding feat for a jurist who once went 10 years without asking a question from the bench.

“He would have never said, ‘Gee whiz, I should be an icon,’” said Helgi Walker, a lawyer at the firm Gibson Dunn who clerked for Justice Thomas in 1995 and 1996. “But life is long, and it’s amazing how things can turn out sometimes.”

Since his confirmation hearings in 1991, which included sexual harassment allegations, Justice Thomas has largely been out of the public eye. And for decades, his legal thinking was considered too extreme even for the court’s conservative members, who often declined to join his dissents and concurrences.

Justice Thomas hasn’t changed, nor has his bitterness about the way his confirmation hearings unfolded. But the political moment has. Renewed interest in his life, work and philosophy may be coming from the same place as that in Justice Ginsburg: the Trump era.

Justice Thomas, currently the longest-serving justice, is known as Mr. Trump’s favorite on the court, with many in the legal world citing the numerous former Thomas clerks who have been tapped for the federal bench.

As Justice Ginsburg has become the flag bearer of the Supreme Court’s diminished judicial left, Justice Thomas, who spent years dissenting on the fringes, is a potent symbol for an ascendant conservative wing.

“He’s the most right-wing member of the court, and we are in a right-wing moment,” said Randall Kennedy, a professor at Harvard Law School and critic of the justice. In a piece in The Nation last fall, he criticized those who he said had recently “been solicitous of Thomas” in terms of his biography and his legal thinking, writing that he’d once been the same himself.

Last November in Washington, when gathering in a group was festive and not contested, a largely libertarian crowd convened at the Cato Institute to watch the documentary about Justice Thomas, “Created Equal: Clarence in His Own Words,” in which Justice Thomas laid out again his side of the confirmation showdown. Archival footage showed a younger Mr. Thomas in a red-and-grey tie. 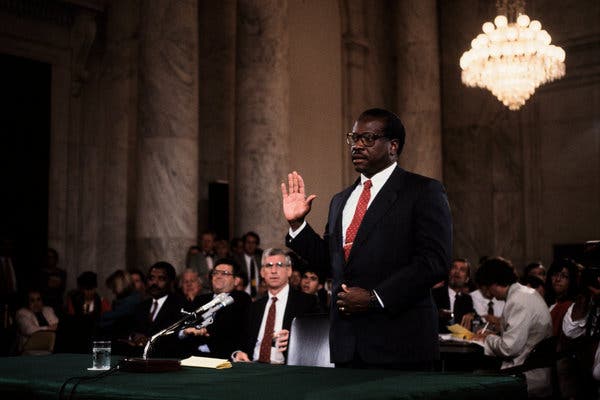 Clarence Thomas as a Supreme Court nominee at his Senate confirmation hearings in 1991.Credit…Lee Corkran/Sygma, via Getty Images

“As far as I am concerned, it is a high-tech lynching,” the younger Mr. Thomas said of the hearing as the film’s audience nodded approvingly.

The camera then flipped to another man who has re-emerged into the political debate lately: Joe Biden, who was the chairman of the Senate Judiciary Committee at the time. There were guffaws until the camera turned elsewhere. Justice Thomas then appeared on the screen years later, in a dark suit and with white hair.

“I mean, come on, we know what this is all about,” he says to the camera. “This is the wrong black guy. He has to be destroyed, just say it.”

The line had an impact on Carol M. Swain, a former law professor and conservative political commentator who recently watched the film and said she saw the 1991 hearings in the context of Justice Brett Kavanaugh’s in 2018. “It’s not just an agenda to derail a nomination, it’s an effort to destroy a person,” she said.

Many conservatives also now see vindication in the way the court has recently begun to adopt Justice Thomas’s thinking. His legal views spent the 1990s and the early 2000s bottled up as dissents and concurrences that his colleagues often did not sign onto. Now, many are becoming the law of the land.

A little-noticed case in 2009 involving an Austin, Texas, utility district offers a telling example. The district sought to be exempted from the 1965 Voting Rights Act “preclearance” requirements, under which states with a history of discrimination must get federal approval to change the ways in which people can cast votes. The court ruled unanimously that the requirement, a response to Jim Crow efforts to stop African-Americans from electing representatives, shouldn’t apply to a utility district.

Justice Thomas, however, went further: In a concurrence, he agreed with an argument the district had made that the preclearance requirement was itself unconstitutional.

Four years later, a higher-profile case, Shelby County v. Holder, reached the Supreme Court. This time, a five-to-four conservative majority overturned the portion of the Voting Rights Act used to determine which states had a history of discrimination and required preclearance. The decision lifted much of its reasoning from Justice Thomas’s earlier concurrence.

“It was a testament to his influence,” said Jennifer Mascott, a former clerk for Justice Thomas who now teaches law at George Mason University. “It’s a testament to how his thinking is moving the ball forward.”

Justice Ginsburg saw it in different terms. Her dissent said the ruling would effectively gut the Voting Rights Act and was tantamount to “throwing away your umbrella in a rainstorm because you are not getting wet.” An estimated 1,700 polling places have been closed, mainly in the South, since the court ruling, and voter suppression is already shaping up to be a battleground in the 2020 election.

Those gathered at the Cato Institute last fall were talking less about Justice Thomas’s jurisprudence than they were about his biography. The story of his life and the intellectual home he found among American conservatives is one that, his supporters note, runs contrary to the notion that the Trumpist version of the Republican Party is sympathetic to white nationalist influences.

Justice Thomas grew up impoverished in a Gullah-speaking community in Georgia and spent his youth as a black nationalist radical in the mold of Malcolm X before reluctantly accepting a job with a Republican attorney general in Missouri, the only job offer he was given, he explains in the film. He voted for Ronald Reagan in 1980, in what he called “a giant step for a black man.”

“It really isn’t just about correcting the record about him: I think it’s an important story, a great American story, the classic American story that I think should be told,” Mr. Pack, the film’s director, said during a question-and-answer period.

That came to light after Mr. Pack went on Fox News’s “The Ingraham Angle” on Monday to promote his latest film and note, with some amazement, a different confluence of events: Joe Biden, presidential candidate, now facing a sexual-assault allegation that he has vehemently denied, is the man who presided over Justice Thomas’s confirmation hearings, which featured a harassment allegation that Justice Thomas vehemently denied.

Last week, as the Supreme Court heard oral arguments in the question of whether Congress may subpoena Mr. Trump’s financial records, Justice Thomas ended one line of questioning by saying, “I think we all know it’s about the president.”

And in many ways, Justice Thomas’s higher public profile is about the president, too. Mr. Trump rose to power with help of Christian evangelicals, who have long sought to change the makeup of the court, and they have largely been supportive of the judges he has appointed.

“There is a sense that no president has given them as much as Trump has,” said Daniel K. Williams, a history professor at the University of West Georgia who focuses on religion.

Justice Thomas’s vote is crucial if conservatives wish to attain their longest-held ambitions, from rolling back abortion rights to ending affirmative action.

Yet black conservatives like Ken Blackwell realize that the rehabilitation of Justice Thomas’s legacy may have it its limits. Mr. Blackwell, a former mayor of Cincinnati, said that while the justice might be experiencing a renaissance among conservatives, making the sale to the black community, which votes overwhelmingly Democratic, would be more of a challenge.

But he did not rule out the possibility, with the rekindled interest in Justice Thomas.

“If by some accident of history, he had passed away at 65, I’m not sure the full appreciation of Clarence Thomas would have happened,” Mr. Blackwell said. “But the fact that he has lived this long means he may well outlive the mischaracterizations, and maybe it’s just long enough that his story finally gets heard.”