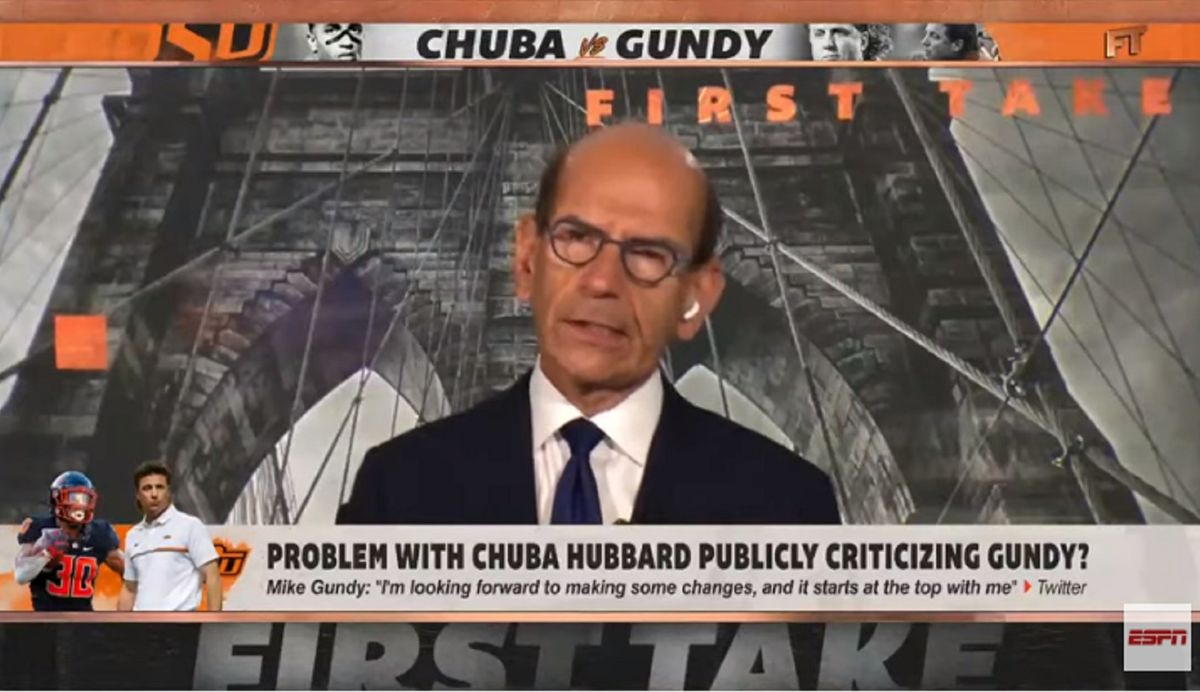 ESPN’s “First Take” show launched an all-out assault on Oklahoma State head coach Mike Gundy on Tuesday, torching him over the uproar brought on by him wearing a One America News T-shirt.

Co-host and SEC Network personality Paul Finebaum even went as far as to call Gundy “a buffoon,” and argued that OSU would be “better today” if the university had fired him over the T-shirt ordeal.

On Monday, OSU star running back Chuba Hubbard declared on Twitter that he would boycott his own team after a CBS Sports reporter shared a photo of Gundy wearing an OAN T-shirt while on a fishing trip last week.

Online outrage ensued, with some condemning Gundy for donning the letters of a conservative news outlet and others condemning Hubbard for overreacting.

By the end of the day, Gundy and Hubbard posted a video statement together, wherein the coach promised changes and the player apologized for the way he handled the situation.

“First Take” analyzed the issue Tuesday morning. Host Stephen A. Smith started out with the most tempered take, warning against “trying to police what people feel” and believe while arguing that he prefers folks to “expose themselves” as having opinions “we” (presumably meaning ESPN) view as being wrong.

Co-host Max Kellerman piggybacked off Smith’s comments, taking it up a notch when he said, “You may have roaches, but I like it better when they’re in the walls and I don’t have to see ’em.”

Kellerman went on to say that if a U.S. politician were to hold the same views as the late Italian dictator Benito Mussolini, that supporting such a politician would be a “deal-breaker.” The sports analyst then criticized Gundy for praising pro-Trump OAN, called the coach stupid, and slammed him for not apologizing in his video with Hubbard.

Finebaum praised Kellerman’s assessment, then asserted, “Mike Gundy is a buffoon. He proves that every time he opens his mouth — or does anything, for that matter — and Max is right: In this particular moment in history — considering everything that has been going on — to wear that T-shirt is an insult.”

The SEC pundit further attacked Gundy’s record as a coach.

“Mike Gundy has been doing this for a long time. He continues to put his foot in his mouth every time he speaks,” Finebaum added. “I can tell you one thing, Oklahoma State would be better today if they fired Mike Gundy than to allow him to continue to embarrass the program and embarrass his players.”

Coach Gundy did release a video apology later in the day on Tuesday, saying that he met with his team and they explained to him why they were so offended by him wearing an OAN T-shirt.

“Once I learned how that network felt about Black Lives Matter, I was disgusted and knew it was completely unacceptable to me,” said Gundy, who has a 129-64 record at OSU in 15 seasons.