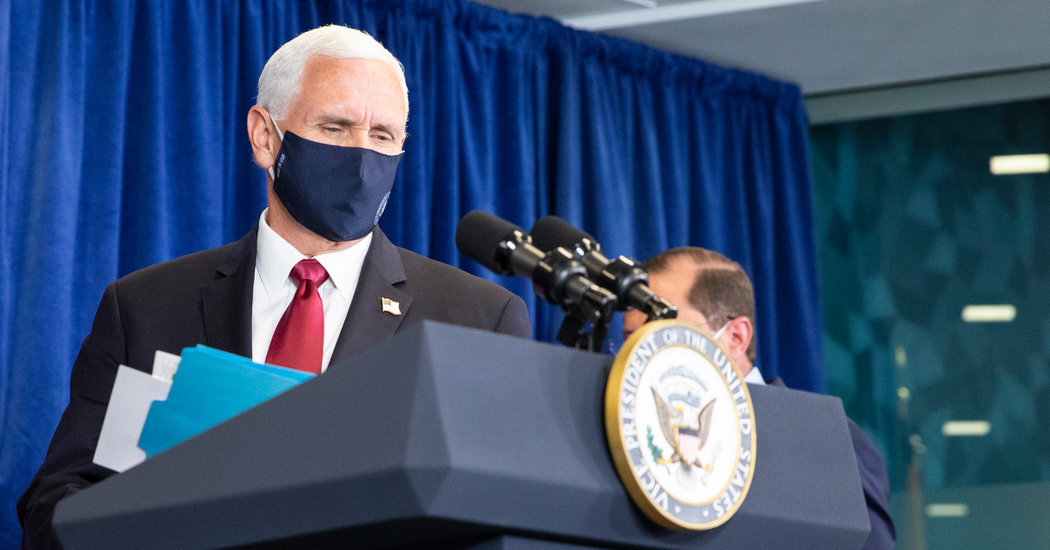 WASHINGTON — Vice President Mike Pence postponed a planned trip this week to Arizona after Secret Service agents set to travel with him tested positive for the coronavirus or showed symptoms, two administration officials said on Thursday.

Mr. Pence had been scheduled to visit Arizona on Tuesday, but multiple factors related to the spread of the virus foiled those plans, according to a person familiar with Mr. Pence’s travel.

A swift rise in new cases in the state has overwhelmed testing centers in recent days, and Gov. Doug Ducey, a Republican, ordered bars, gyms and movie theaters closed this week. In an apparent acknowledgment of outbreaks erupting across the South and the West, the vice president canceled his plan to headline a “Faith in America” campaign rally in Tucson on Tuesday and then tour Yuma with Mr. Ducey.

Instead, Mr. Pence opted for a shorter visit to Phoenix on Wednesday, where he participated in a public health briefing at Sky Harbor International Airport.

“Help is on the way,” Mr. Pence said at a news conference with Mr. Ducey at the airport, after descending the steps of Air Force Two wearing a mask, the latest sign of the administration’s evolving stance on face coverings.

But the positive tests and symptoms of Secret Service agents expected to be in proximity to the man who is second in line for the presidency were some of the factors that prompted his change of schedule, the officials said. The news of the agents who showed symptoms of Covid-19, or tested positive, was first reported by The Washington Post.

A spokeswoman for Mr. Pence did not respond to a request for comment.

Catherine Milhoan, the director of communications for the Secret Service, said late Thursday that the agency does not comment on how it protects principals in government. But she added that “the health and safety of our work force, their families, and that of our protectees remains the agency’s highest priority.”

Still, the latest illnesses among the small circle of individuals who interact directly with the vice president were a reminder of the dangers of carrying on with campaign and official government travel as the pandemic rages on.

At least eight campaign staff members who helped plan President Trump’s indoor rally last month in Tulsa, Okla., have tested positive for the virus, either before the rally or after attending, the campaign said. On Thursday, after Herman Cain, a former presidential candidate who had been at the president’s rally in Tulsa, said he had been hospitalized for the coronavirus, a Trump campaign spokesman, Tim Murtaugh, made it clear that Mr. Cain had not seen the president in person while at the event. “Mr. Cain did not meet with the president,” Mr. Murtaugh said.

In May, Katie Miller, a spokeswoman for Mr. Pence, tested positive for the coronavirus, as did a military aide to Mr. Trump.

The president, however, has continued to promote an optimistic message that the worst of the pandemic has passed, even as he has suspended planned campaign events and aides who have worked the ones he has staged have fallen ill.

“We’d like to see churches open quickly,” Mr. Trump said at a news conference on Thursday morning, praising the latest job numbers, even as the country reported more than 55,000 new cases. “A lot of people would have wilted. We didn’t wilt. Our country didn’t wilt.”