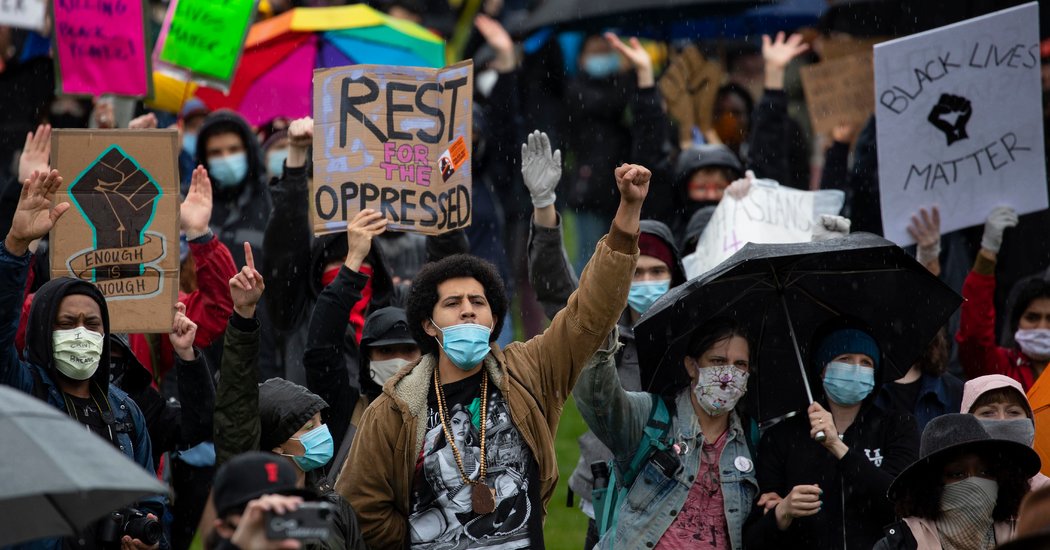 WASHINGTON — A top Pentagon official has told Congress that the nation’s military intelligence agencies did not spy on American protesters during the wave of nationwide demonstrations against the police killings of African-Americans.

In a letter on Thursday to the House Intelligence Committee, Joseph D. Kernan, the under secretary of defense for intelligence and security, said he had received no orders from the Trump administration to conduct such surveillance, and he underscored citizens’ constitutional right to protest peacefully.

But he reminded lawmakers of the role of Pentagon intelligence agencies to help defend against foreign interference in American domestic political affairs.

Without mentioning any specific role Pentagon spy agencies might have played in monitoring foreign activities during the recent protests, Mr. Kernan acknowledged that such clandestine efforts could be misconstrued.

In the two-page letter, which the committee made public on Friday, Mr. Kernan stressed that he had “not been asked by anyone in the administration or the Department of Defense to undertake any unlawful or inappropriate intelligence activities that could violate civil liberties in association with the domestic civil disturbances.”

Mr. Kernan said that the directors of the Defense Intelligence Agency, National Security Agency and National Geospatial-Intelligence Agency “have all personally assured me they have not received or made any such requests” to spy on Americans.

Representative Adam B. Schiff, Democrat of California, who leads the committee, asked the Pentagon this week to address concerns raised by some intelligence agency personnel in the Defense Department who feared they might be compelled to help conduct surveillance on Americans participating in demonstrations.

The letter came after the administration was roundly criticized for rushing thousands of National Guard and federal law enforcement personnel to the streets of the capital to help in the crackdown on mostly peaceful protesters and occasional looters after the death of George Floyd in the custody of the Minneapolis police.

The deployment of U.S. military intelligence units on American soil in support of domestic law enforcement operations is unusual, but it has happened before.

In 2002, at the request of the F.B.I., the Army deployed secret surveillance planes as part of a broadening effort to catch a sniper in the Washington area.

To do so in support of ferreting out foreign interference here — for example, to determine if another country was trying to provoke greater unrest on the streets — would be even more unusual. A Pentagon spokesman declined on Friday to say whether that had happened during the recent protests.

Intelligence and Pentagon officials said they had been closely monitoring the protests for any sign of attempts by Russia or other foreign powers to seize on the racial tensions, but so far they have noted only public statements by Russian officials criticizing the United States for its handling of the demonstrations.

The Russian government has in recent months increased efforts to inflame racial tensions in the United States as part of its bid to influence the presidential election in November, including trying to incite violence by white supremacist groups and to stoke anger among African-Americans.

“Our country faces a myriad of foreign bad actors attempting to interfere in our political process, and those threats are only likely to increase as we approach the 2020 elections,” Mr. Schiff said in a statement. “Constant vigilance, robust congressional oversight and greater transparency will be necessary to combat that interference.”

The militarized response to the protests, however, has prompted some military spy agency personnel to express fears of overreach.

During an unclassified virtual gathering last week, the director of the Defense Intelligence Agency, Lt. Gen. Robert P. Ashley Jr., fielded questions from employees about whether they could be ordered to support domestic intelligence efforts to investigate protesters, according to an account first published by Yahoo News.

“The mission of the Defense Intelligence Agency is to provide intelligence on foreign militaries to prevent and win wars,” James M. Kudla, an agency spokesman, said in an email. “Any claims that D.I.A. has taken on a domestic mission are false.”