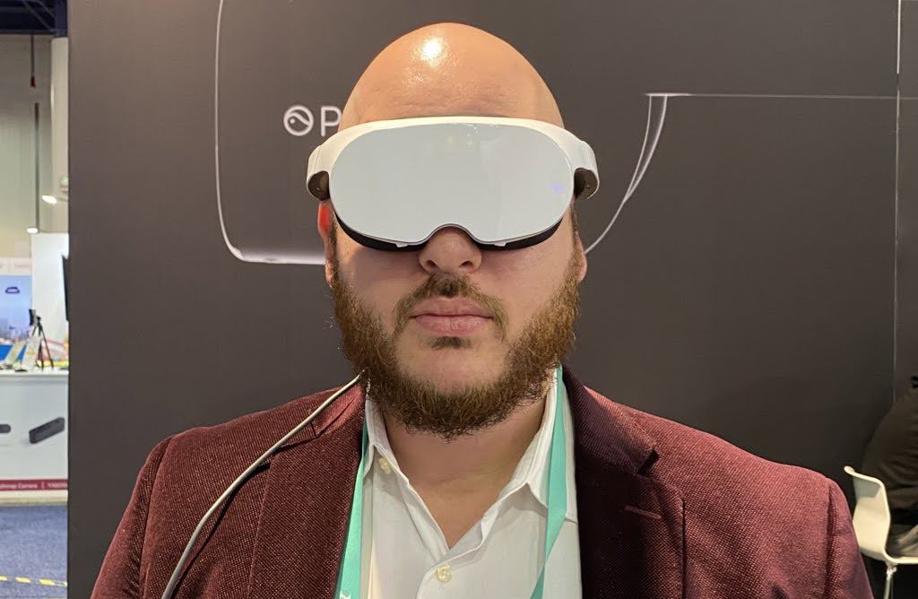 Since both AR and VR are in the enterprise phase of development, it makes sense that there was very little AR and VR at CES 2020. In fact, these technologies are grouped within the very large gaming section at the exhibition, which can lead to some very confusing booth placements and unnecessary walking around. That said, the things I saw at the conference were exciting and gave me hope for the future of immersive computing. Here are a few of the companies that I believe led the way at CES 2020.

Pico Interactive announced a plethora of new products and concepts at the show. The company announced the industry’s first standalone VR headset to utilize Tobii Technology’s Spotlight eye tracking technology, the Pico Neo 2 Eye. This is significant because standalone VR is where eye-tracking is the most beneficial, since it enables foveated rendering. Foveated rendering, for the unfamiliar, is when the render load on the GPU is reduced by only rendering the place where the person’s eyeball is looking at in full resolution and reducing the render quality in our blurrier peripheral vision. These capabilities, paired with the Qualcomm Snapdragon 845 inside, mean we could see some graphics detail and quality never before seen in a standalone headset. I actually had a chance to see the difference for myself up at Tobii’s suite at CES where it showed me a demo of a scene with foveated rendering turned on and off. The difference was staggering. Pico also showed the Pico Neo 2 Eye streaming wirelessly from a PC, demonstrating the versatility of the standalone headset.

In addition to the Pico Neo 2 Eye, Pico showed off the company’s 3-DoF VR glasses, designed to provide high-quality VR experiences without requiring a large headset. The glasses looked sleek and futuristic and didn’t seem to compromise much on the field of view or image quality. 3-DoF doesn’t excite me much, but perhaps it’s a baby step towards 6-DoF tracking. 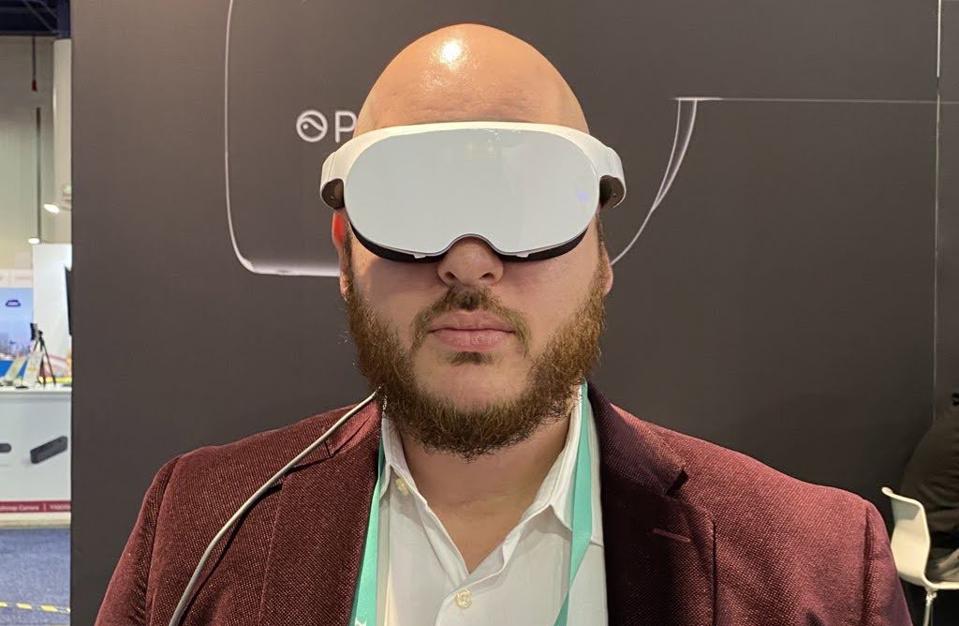 VR wasn’t Pico’s only play at CES 2020. The company also showed off an interesting tabletop AR demonstration with a concept device called the Pico Air Light. The tabletop projector looks like a regular lamp, but houses cameras and a projector to project an augmented reality interface and game onto the table. It’s very hard to explain, so instead, I took a video. You can use physical objects with this projected tabletop AR space, somewhat similar to what HP did with Sprout. Pico is pitching this as a business device, but they didn’t show off any business applications at CES.

At CES 2020 I also got a chance to preview an early prototype of North’s second generation of its Focals smart glasses. I was not expecting to see North at CES, so it was a happy surprise to say the least. I recently published my review of the first generation Focals by North, where I shared some of my thoughts about the Focals and the AR industry in general. The new Focals by North, which I’m calling Focals 2.0 (that’s what North calls them for now), are a vast improvement over the previous generation in nearly every way imaginable. The glasses are significantly lighter and thinner than the previous generation, making them look even more like normal glasses than before. With the first generation, the frames were quite a bit thick on the sides and the projector was noticeable when not wearing the sunglasses clips. With this new generation, it would require close inspection for anyone to notice that the Focals 2.0 are not regular glasses. That alone is a huge deal. This is what Google wished it could have done with Glass.

This new thinner and lighter design also has a significantly improved eye box, which means that a wearer can now put the glasses on and hand them to another person without having to recalibrate. Previously, each person’s face had to be measured precisely so that the glasses could be manufactured perfectly to line up with their iris—the improved eye box solves this problem. The next generation of Focals will be compatible with more people and probably be easier to mass manufacture.

The new Focals by North will also have a significantly higher resolution and larger viewing area. While North has not disclosed specific numbers yet, the company said it increased resolution by 7.5x and increased the eye box by 20x—from what I’ve seen, this checks out. I can also confirm that the display is significantly brighter, with a more dynamic range and less blurring than the previous generation. The graphics capabilities also seem to be improved, with sharper and more complex 3D imagery. There is still a bit of a screen door effect, but it is significantly reduced from the first generation. I honestly believe that most consumers will be thoroughly impressed with what they see in Focals 2.0.

Last year, nReal made quite a splash. In May, the company launched its first headset, the nReal Light Developer edition, at AWE 2019. This developer edition came with a compute puck powered by a Snapdragon 845, and the company’s Light glasses, which feature 6-DoF AR capabilities. The company promised it would debut its consumer version of the nReal Light AR glasses in 2020, and at CES, the company did just that.  It also launched Nebula UI, a new interface to help bring 2D apps into spatial computing. Essentially, NebulaUI enables the user to launch 2D apps inside of nReal’s launcher place them anywhere they want inside of a spatial computing UI.

I got a chance to play with both the nReal Light consumer version and the Nebula user interface. I thought the glasses were slightly more comfortable than the previous version, perhaps because nReal shortened the cable, making them seem lighter. The glasses optics appear to be the same—very high quality, incredibly light and not very large at all. I was surprised by how well the Nebula interface ran on a smartphone and how easy it was to use with 2D apps not designed for immersive computing. I don’t think that this is necessarily a long-term solution, but it is a good way to keep people inside of AR for longer and enable them to do more with their phones. Currently, Nebula supports multi-tasking of up to three apps at the same time, but I would love to see that expand. People like me like to run dozens of tabs at a time.

I also got to see some very compelling AR demos with the nReal Light consumer glasses. The two that stood out to me were the AR shopping demonstration and the AR smart home demonstration. The smart home demonstration was particularly compelling because I could use the glasses to control the lights in the room and change their color. I could also adjust the size of the virtual TV I was watching from 220” to 85” to 32”. I think the most compelling size was 85” because it incorporated a lot of statistics and scrolling twitter feed reactions. I think this is a very cool way to leverage the benefits of AR for sports and the embodiment of the immersive TV watching experience of the future. The shopping demo was interesting because it showed the full graphical capabilities of the nReal platform paired with a high-end smartphone. The graphics and resolution were good enough to feel realistic and immersive without feeling surreal or crossing the uncanny valley.

Panasonic showed off a prototype of its own VR glasses which are incredibly small and lightweight and look very steampunk. Nobody expected Panasonic to be making any announcements at the show, but the company used Kopin’s display technologies to create a prototype of HDR micro OLED glasses. The FoV of these glasses is 100 degrees—this is below where most VR headsets are today, which for a future headset might be challenging. While the demo was powered by a PC, the expectation is that these glasses will eventually be paired with a smartphone via USB Type-C, giving the glasses access to content and leveraging 5G.

The lack of a tracking system, I believe, is what hampers Panasonic’s success at this point. I don’t see this kind of light headset being particularly popular with PC VR users, as many of them are enthusiasts at this point. Panasonic should be focusing on mobile use cases, for more casual users that want to attach this to their smartphone or tablet. While Panasonic did not reach out to me for a demo, from what I’ve heard from others, they are nowhere near production-ready. Perhaps they will be good for viewing VR videos, but that’s a very niche use case. I think Panasonic will have to do better than that to find success. Additionally, Panasonic is hardly a consumer company anymore—I don’t particularly see it pursuing a consumer product this.

While I don’t consider CES to be much of a showcase for VR and AR, I believe this year’s show illustrated that there are still compelling consumer technologies on the way. I believe that 2020 will be a good year for consumer XR, with the Focals 2.0 and nReal glasses coming to market. Pico also showed many interesting VR developments at CES. Additionally, it will be interesting to find out how many Oculus Quest headsets were sold in 2019 and how that will impact the industry’s momentum. I have high hopes for 2020—I’m sure there’s still more news to come.

Disclosure: Moor Insights & Strategy, like all research and analyst firms, provides or has provided research, analysis, advising, and/or consulting to many high-tech companies in the industry. The author does not hold any equity positions with any companies cited in this column.

Ten NFL players who could come off the bench to save the day in AFC, NFC championship games

Nothing could keep Larry King away from TV: ‘They’re gonna have to carry me out’