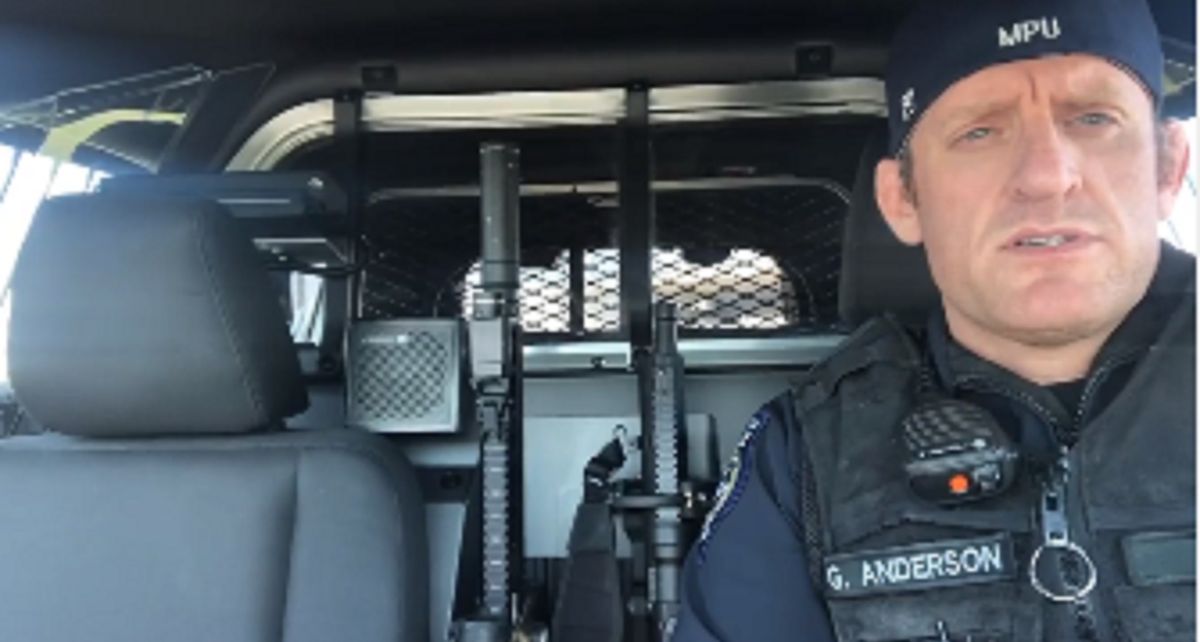 A Port of Seattle police officer has been suspended by his department, after he posted a video message on social media speaking out against law enforcement officers in the U.S. who are enforcing what he called “tyrannical orders” imposed amid coronavirus lockdowns.

Officer Greg Anderson, a Special Forces veteran, posted a video on Instagram last week directed at his fellow officers across the nation, expressing his concerns.

“I’ve seen officers nationwide enforcing tyrannical orders against the people and I’m hoping it’s the minority of officers, but I’m not sure anymore,” Anderson said. “Because every time I turn on the television, every time I look to the internet, I’m seeing people arrested or cited for going to church, for traveling on the roadways, for going surfing, opening their businesses, going to park with their families, or doing nails out of their own house—using their own house as a business and having special agents go there and arrest them.”

Anderson told his peers, “We need to start looking at ourselves as officers and thinking, ‘Is what I’m doing right?'” He continued, “I want to remind you that regardless of where you stand on the coronavirus, we don’t have the authority to do those things to people just because a mayor or a governor tells you otherwise.”

Anderson’s message went viral, and in an update to his Instagram account on Monday, he reported that he has been placed on administrative leave by the Port of Seattle Police Department pending an investigation.

Port of Seattle Police Chief Rod Covey confirmed Anderson’s paid suspension in a statement on the department’s website, writing, “Greg has always had the ability to express his opinions on what is going on in the country like all other Americans. However, he is not allowed to do so while on duty, wearing our uniform, wearing our badge and while driving our patrol car.”

Covey continued, “Every police officer in the country understands that. I personally told this to Greg and told him that I would support his right to talk about these issues as long as he did so while not claiming any affiliation to our police department. Greg has chosen this course of action ever after he and I spoke and while also knowing that his actions were outside of well-established policy.”

The Daily Caller reported that “Anderson says he was informed by the department and his union that the reason for termination was due to insubordination for refusing to take down his Instagram video.”

The officer said that after posting his original video, “I had received a message from command saying, ‘Wow Greg, what a powerful message. We agree with that 100 percent, well done,’ and that was a relief for me. Fast forward three hours later I get another phone call from my command, ‘Hey Greg, the video is up to 400,000 views, it’s time to pull the plug on this thing.'”

Anderson added, “I have three little kids, I have this house, I have another house. I cannot afford to lose my job.”

A GundFundMe page has been launched for Anderson and his family, and its message states that the funds will go toward “legal representation and to help cover any costs that the unforeseen future brings during this drastic change to their lives.” As of this writing, it has raised more than $278,000 with a goal of raising $50,000.