President Trump on Friday commuted the sentence of Roger J. Stone Jr., a longtime friend and former campaign adviser who had openly expressed loyalty to him throughout a congressional investigation into ties between Mr. Trump’s 2016 campaign and Russia.

“The simple fact is that if the special counsel had not been pursuing an absolutely baseless investigation, Mr. Stone would not be facing time in prison,” the White House said in a statement on Friday evening.

Mr. Stone had been days away from reporting to a federal prison to serve a 40-month sentence for seven felonies, including lying to federal investigators, tampering with a witness and impeding a congressional inquiry. He had aggressively lobbied for clemency, both in the courts and on social media.

The commutation, which was immediately criticized by Democrats, adds Mr. Stone to a list of beneficiaries of Mr. Trump’s clemency in cases that resonate with him personally — or with people who have a direct line to him through friends or family — over thousands of other cases awaiting his review.

The Supreme Court has ruled that the Constitution gives presidents unlimited authority to grant pardons, which excuse or forgive a federal crime. A commutation, by contrast, makes a punishment milder without wiping out the underlying conviction — in Mr. Stone’s case, the White House did not argue that he was innocent. Both are forms of presidential clemency.

Here are some of the pardons and commutations issued by Mr. Trump: 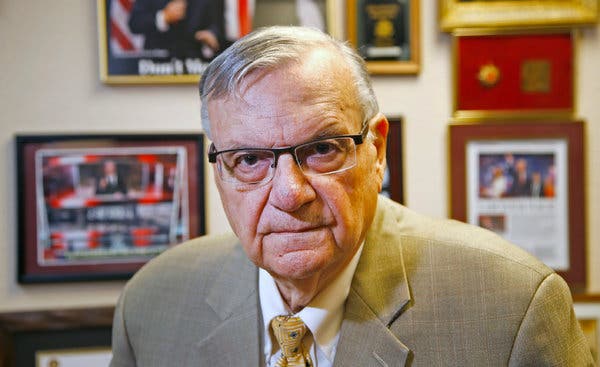 Joe Arpaio, an anti-immigration crusader who enjoyed calling himself “America’s toughest sheriff,” was the first pardon of Mr. Trump’s presidency.

Once one of the most popular — and divisive — figures in Arizona, Mr. Arpaio was elected sheriff of Maricopa County five times before he was ultimately charged with criminal contempt for defying a court order to stop detaining people solely on the suspicion that they were undocumented immigrants.

In a move that drew outrage from Democrats and immigration advocates, Mr. Trump, who has staked much of his political capital around zero-tolerance immigration policies, pardoned Mr. Arpaio less than a month after he was found guilty.

Conrad M. Black, a former press baron and friend of Mr. Trump’s, was granted a full pardon 12 years after his sentencing for fraud and obstruction of justice.

Mr. Black, who once owned The Chicago Sun-Times, The Jerusalem Post and The Daily Telegraph of London, among other newspapers, was convicted of fraud in 2007 with three other former executives of Hollinger International. They had been accused of skimming millions of dollars from the media company.

Mr. Black, who was released from prison in 2012, is the author of several pro-Trump opinion articles as well as a flattering book, “Donald J. Trump: A President Like No Other.”

Former Gov. Rod R. Blagojevich of Illinois outside his home in Chicago in February after being released from prison in Colorado.Credit…Laura McDermott for The New York Times

Former Gov. Rod R. Blagojevich of Illinois was sentenced in 2011 to 14 years in prison for trying to sell or trade to the highest bidder the Senate seat that Mr. Obama vacated after he was elected president. Mr. Blagojevich’s expletive-filled remarks about his role in choosing a new senator — “I’m just not giving it up for nothing” — were caught on government recordings of his phone calls and became punchlines on late-night television.

Dinesh D’Souza received a presidential pardon after pleading guilty to making illegal campaign contributions in 2014. Mr. D’Souza, a filmmaker and author whose subjects often dabble in conspiracy theories, had long blamed his conviction on his political opposition to Mr. Obama.

“What happened here is Obama and his team — Eric Holder, Preet Bharara in New York — these guys decided to make an example of me, and I think that the reason for this was Obama’s anger over my movie that I made about him,” Mr. D’Souza said on “Fox and Friends,” one of Mr. Trump’s favorite shows.

His reasoning seemed to strike a nerve with the president: In issuing his pardon, Mr. Trump said that Mr. D’Souza had been “treated very unfairly by our government,” echoing a claim the commentator has often made himself.

Edward J. DeBartolo Jr., a former owner of the San Francisco 49ers, pleaded guilty in 1998 to concealing an extortion plot. Mr. DeBartolo was prosecuted after he gave Edwin W. Edwards, the influential former governor of Louisiana, $400,000 to secure a riverboat gambling license for his gambling consortium.

The 49ers won five Super Bowl championships in a 14-year span while Mr. DeBartolo was serving as the team’s principal owner. Although Mr. DeBartolo avoided prison, he was fined $1 million and was suspended for a year by the N.F.L.

Alice Johnson, center, was a guest of the First Lady at the State of the Union address in 2019.Credit…Erin Schaff for The New York Times

Alice Marie Johnson was serving life in a federal prison for a nonviolent drug conviction before her case was brought to Mr. Trump’s attention by the reality television star Kim Kardashian West.

The president’s decision to commute her sentence freed Ms. Johnson, who had been locked up in Alabama since 1996 on charges related to cocaine distribution and money laundering.

Since her release, the Trump campaign has used her as the face of its outreach to Black voters: In February, Ms. Johnson was featured in the campaign’s Super Bowl ad, which was viewed by about 102 million people during the game.

“I’ve been such a source of pride for him,” Ms. Johnson said at the time. “Who doesn’t want to show something they’re proud of during an election year? That’s what all the candidates do. For him to highlight me, it makes me know he’s not only proud, he’s super proud.”

Jack Johnson, the first Black heavyweight boxing champion, was tarnished by a racially tainted criminal conviction in 1913 — for transporting a white woman across state lines. It haunted him even well after his death in 1946.

Politicians and celebrities alike tried for years to secure a pardon, but in the end, Mr. Trump was swayed by a friendly phone call from Rambo.

“Sylvester Stallone called me with the story of heavyweight boxing champion Jack Johnson,” Mr. Trump wrote on Twitter just weeks before announcing his decision. “His trials and tribulations were great, his life complex and controversial. Others have looked at this over the years, most thought it would be done, but yes, I am considering a Full Pardon!”

Ten years ago, Bernard B. Kerik, a former New York City police commissioner, was sentenced to four years in prison after pleading guilty to eight felony charges, including tax fraud and lying to White House officials. Around the time of his sentencing, federal prosecutors denounced Mr. Kerik as a corrupt official who sought to trade his authority for lavish benefits.

Mr. Trump said he heard from more than a dozen people about pardoning Mr. Kerik, including Rudolph W. Giuliani, the former New York mayor and Mr. Trump’s personal lawyer. Mr. Kerik’s rise to prominence dates to the 1993 campaign for mayor in New York City, when he served as Mr. Giuliani’s bodyguard and chauffeur. After the pardon was announced, Mr. Kerik expressed his gratitude to Mr. Trump on Twitter. “With the exception of the birth of my children,” he wrote, “today is one of the greatest days in my life.”

I. Lewis Libby Jr. was Vice President Dick Cheney’s top adviser before Mr. Libby was convicted in 2007 of four felony counts, including perjury and obstruction of justice, in connection with the disclosure of the identity of a C.I.A. officer, Valerie Plame.

Mr. Libby had maintained his innocence for years, and his portrayal as a victim of an unfair prosecution ultimately found favor with Mr. Trump.

“I don’t know Mr. Libby,” Mr. Trump said in a statement, “but for years I have heard that he has been treated unfairly. Hopefully, this full pardon will help rectify a very sad portion of his life.”

Mr. Trump’s decision to clear three members of the armed services who had been accused or convicted of war crimes signaled that the president intended to use his power as the ultimate arbiter of military justice.

He ordered full pardons of Clint Lorance, a former Army lieutenant who was serving a 19-year sentence for the murder of two civilians, and Maj. Mathew L. Golsteyn, an Army Special Forces officer who was facing murder charges for killing an unarmed Afghan he believed was a Taliban bomb maker.

The president also reversed the demotion of Chief Petty Officer Edward Gallagher, a Navy SEAL who had been acquitted of murder charges but convicted of a lesser offense in a high-profile war crimes case.

All three had been championed by prominent conservatives who had portrayed them as war heroes unfairly prosecuted for actions taken in the heat and confusion of battle.

Michael R. Milken was the billionaire “junk bond king” and a well-known financier on Wall Street in the 1980s. In 1990, he pleaded guilty to securities fraud and conspiracy charges and was sentenced to 10 years in prison, though his sentence was later reduced to two. He also agreed to pay $600 million in fines and penalties. After his release, Mr. Milken created the Milken Institute, a nonpartisan think tank.

Mr. Milken did not have a pardon or commutation application pending at the Justice Department’s pardons office, meaning that the president made that decision entirely without official department input. Among those arguing for Mr. Milken to be pardoned were Mr. Giuliani, who as the U.S. attorney for the Southern District of New York prosecuted Mr. Milken.

David H. Safavian, the top federal procurement official under President George W. Bush, was sentenced in 2009 to a year in prison for covering up his ties to Jack Abramoff, the disgraced lobbyist whose corruption became a symbol of the excesses of Washington influence peddling. Mr. Safavian was convicted of obstruction of justice and making false statements.

“Having served time in prison and completed the process of rejoining society with a felony conviction, Mr. Safavian is uniquely positioned to identify problems with the criminal justice system and work to fix them,” the White House said in the statement announcing his pardon.

Angela Stanton in 2018. She wrote “Life of a Real Housewife,” which explores her difficult upbringing and her encounters with reality TV stars.Credit…Roy Rochlin/Getty Images for SiriusXM

Angela Stanton — an author, television personality and motivational speaker — served six months of home confinement in 2007 for her role in a stolen-vehicle ring. Her book “Life of a Real Housewife” explores her difficult upbringing and her encounters with reality TV stars.

Before her pardon, she gave interviews in which she declared her support for Mr. Trump. In announcing her pardon, the White House credited her with working “tirelessly to improve re-entry outcomes for people returning to their communities upon release from prison.”