WASHINGTON — From the earliest days of his presidential campaign, progressive climate advocates viewed Joseph R. Biden Jr. with deep skepticism. He declined to fully endorse the Green New Deal. He opposed a total ban on fracking. Young activists were scathing in their criticism of him, and he was at times openly dismissive of their concerns.

But now, less than four months before Election Day, Mr. Biden is moving urgently to unite and energize his party around his candidacy, aware of the need to engage younger, more liberal voters — and to ensure that they turn out in November. On climate issues, there are signs that Mr. Biden’s allies and some of the party’s leading progressives have quietly started to forge new common ground.

In recent weeks, supporters of Mr. Biden and of Senator Bernie Sanders of Vermont, his chief rival in the Democratic presidential primary race, have met privately over Zoom, part of several joint task forces that the two contenders established to generate policy recommendations on core domestic priorities, and to facilitate party unity. After two months of those conversations, task force members representing both camps say they have finalized a set of ambitious, near-term climate targets that they hope Mr. Biden, the presumptive Democratic nominee, will incorporate in his platform.

“I do believe we were able to make meaningful progress,” Representative Alexandria Ocasio-Cortez, Democrat of New York, who headed the climate panel with former Secretary of State John Kerry, said in an interview last week. Representative Donald McEachin of Virginia, a Biden ally who was also on the task force, called it a “collaborative process” that developed wide-ranging policies.

Still, Ms. Ocasio-Cortez, who has previously clashed with Mr. Biden over his approach to combating climate change, struck a note of caution.

“Now, what he does with those recommendations, ultimately, is up to him,” she said. “And we will see what that commitment looks like.”

Those goals, according to three people familiar with the task force’s decisions, include committing to seeing the United States’ electricity sector powered fully by renewable energy by 2035 and a rapid transition to energy-efficient buildings. They also seek a Day 1 promise to begin developing new vehicle efficiency standards — and to include labor unions in the discussions — to replace and improve upon the Obama administration measures that President Trump has weakened.

The group, which convened amid economic collapse during the coronavirus pandemic and protests against racism and police brutality, was especially attuned to linking the climate crisis to jobs as well as to the struggle to help low-income communities that already face outsize health consequences from pollution, task force members said.

“I think where we have really made a lot of progress is in areas with respect to environmental justice and addressing front-line communities,” Ms. Ocasio-Cortez said.

But how he responds to the task force’s recommendations — and whether progressives in the group walk away feeling heard — will test his campaign’s ability to navigate an issue of great importance to ascendant forces in the Democratic Party.

“The work of the task forces has been collaborative and productive, and Vice President Biden looks forward to reviewing their full recommendations,” a campaign spokesman, Jamal Brown, said in a statement. As for Mr. Biden’s approach to the issue, Mr. Brown said, “As president, Biden will take immediate action to address the urgency of the climate emergency and create good-paying jobs that provide a chance to join a union, which is especially important now as tens of millions of Americans are out of work.”

In recent weeks Mr. Biden has made a number of overtures to climate activists. He has increasingly linked environmental issues to racial justice, and he said at a recent climate-focused fund-raiser that, if elected, in his first 100 days as president, he would send Congress “a transformational plan for a clean energy revolution.” Last week he announced the formation of an advisory council focused on mobilizing climate-focused voters.

Former Vice President Al Gore said that Mr. Biden had asked shortly before Earth Day for his endorsement, which Mr. Gore gave, and that since then the two men have had multiple conversations about climate change. Mr. Gore said Mr. Biden had asked for advice and suggestions in climate policy areas, though he declined to offer specifics.

“I think he’s got the science pretty well down and he understands the rich potential for creating millions of jobs,” Mr. Gore said, adding, “I get the impression that he has made a decision to lean forward on climate.” 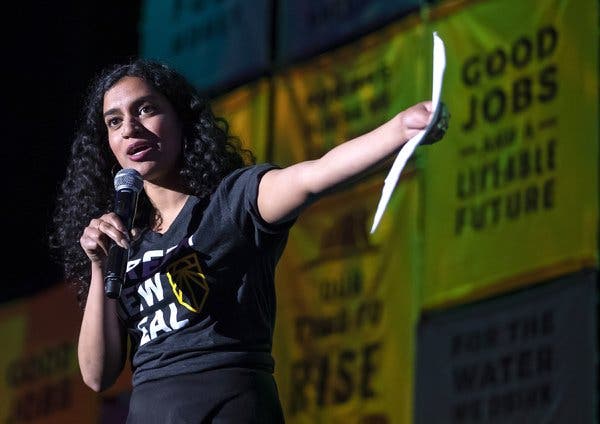 Varshini Prakash, the executive director of the Sunrise Movement, is a member of the climate task force established by Mr. Biden and Senator Bernie Sanders.Credit…Erik S Lesser/EPA, via Shutterstock

At the first meeting of the task force in May, Mr. Kerry made a notable gesture to young progressives. After opening the discussion, he turned the forum over to Varshini Prakash, the executive director of the Sunrise Movement, a youth-led group of climate activists who support the Green New Deal, to discuss how Mr. Biden could win over the climate movement’s most passionate wing, according to two people familiar with the meeting.

In a video Ms. Prakash posted on Twitter after the second meeting, she declared herself “cautiously optimistic” that Mr. Biden’s allies had taken tougher climate policies seriously.

“I don’t believe that Joe Biden has internalized how to communicate and mirror the real, existential fear and anxiety and anger that many millions of people in this country feel about the crisis,” Ms. Prakash, 26, said in an interview shortly after the task force was created. But, she added, “I believe that he really does care about the issue.”

Many advocates remain skeptical. When Ms. Prakash posted her video, she was inundated with replies calling her “naïve” and declaring that Mr. Biden was not serious about ending the country’s dependence on fossil fuels.

Some of Mr. Biden’s allies have suggested he is committed to fighting climate change but also understands the challenge of enacting far-reaching deals in a partisan climate.

“I’m certainly willing, and I know the vice president is, to push it as hard as possible,” said former Senator Bill Nelson of Florida.

But, he added, “Three-quarters of a loaf is better than not having any loaf at all.”

From the start of his presidential run, Mr. Biden has walked a fine line between championing climate change action and trying to engage union members who still rely on jobs in fossil fuel industries, as well as moderate Republicans who may dislike Mr. Trump yet oppose aggressive action on curbing greenhouse gases.

But some public opinion polling seems to indicate that building a big tent on climate change may be easier than previously thought.

Recent surveys by the Pew Research Center have found that, despite a lingering partisan divide over the scientific fact that human activity is the main driver behind global warming, 60 percent of Americans view climate change as a “major threat.” More than half of Republicans and Republican-leaning independents also favor stricter measures like restrictions on power plant emissions and tougher automobile emissions standards.

The League of Conservation Voters, an environmental group, and the Center for American Progress Action Fund, which is affiliated with a liberal think tank, recently tested messaging that might persuade voters to support Mr. Biden. They found that the voters who were still “up for grabs” leaned center-right but were also in favor of prioritizing action to tackle climate change.

Yet Mr. Biden was still facing challenges with young people, according to a report issued by the groups, which was based on internet surveys in May of voters in 11 potentially competitive states.

“It is not enough to just have a bunch of good policy and the strong and right goal,” said John Podesta, the founder of the Center for American Progress and an adviser to former President Barack Obama on climate change. “You have to show that this is going to be a priority, and that you really, passionately understand the risk associated with it.”

He said Mr. Biden needed to dovetail his “Middle-Class Joe” brand with tackling climate issues. “He’s never going to imitate Al Gore at the PowerPoint on science,” Mr. Podesta said, “but what he can do is express passion at creating an economy that’s going to work for everyone.”

A gas drilling site in St. Marys, Pa., in March. The fracking industry is the source of many high-paying union jobs in the state.Credit…Keith Srakocic/Associated Press

The future of natural gas, and its implications for jobs, is a major fault line that separates the Obama-era climate policy leaders from the new generation of activists.

Natural gas produces about half the emissions of coal. Much of the Obama administration’s energy strategy centered on promoting it as a “bridge fuel” to wean the country off dirtier fossil fuels until the price of renewables dropped.

These days, the average cost of new wind or solar power is cheaper than the costs to keep running most coal-fired plants, according to an analysis last year by two energy research groups. And renewable energy generation in the United States has now surpassed coal, according to the federal Energy Information Agency.

Yet in places like Pennsylvania, a state Mr. Trump won by less than 1 percentage point in 2016, the natural gas industry is responsible for thousands of high-paying union jobs. So when Mr. Biden, during a pointed exchange with Mr. Sanders on the debate stage in March, declared “no new fracking,” some allies were alarmed, including former Gov. Edward G. Rendell, who said he called the campaign to voice concern.

Mr. Biden has proposed ending new fracking leases on federal lands, but not a national ban, something his campaign quickly clarified.

Andrew Baumann, a Democratic strategist and pollster, said that there were limits to how far Mr. Biden could push on climate matters without encountering political risk — but that he was “pretty far away from that.”

“It is possible to go too far,” he said. “But the amount that is there to go bolder before you reach that level is really a lot bigger than people think.”

News DSMW - August 14, 2020
0
WASHINGTON — President Trump on Friday launched a preemptive strike against veteran journalist Bob Woodward’s forthcoming book about him — saying the tome, titled “Rage,” would be a “fake.” “The Bob Woodward book will be a FAKE, as always, just as many of the others have been. But, believe it or...

News DSMW - August 14, 2020
0
President Trump told The Post during an Oval Office interview on Thursday that New York City needs “another Rudy” to enter the mayor’s race next year as violent crime soars. “You need another Rudy [Giuliani] to go in there and clean it up. That’s what you need. Rudy was a great...

News DSMW - August 14, 2020
0
With less than three months Election Day, House Democrats are looking into whether key battleground states are prepared in the midst of the pandemic.        ...
MORE STORIES

Trump says NYC needs ‘another Rudy’ to run for mayor next...