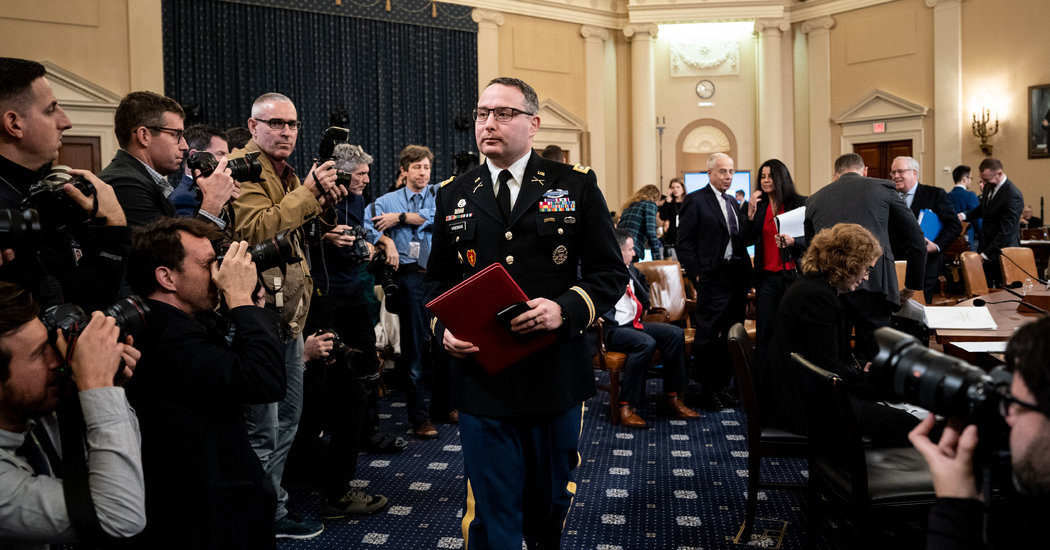 WASHINGTON — The promotion of an Army officer who was a prominent witness in the impeachment inquiry into President Trump last year is imperiled in what Pentagon and congressional officials say could be another flash point between the president and the military.

Lt. Col. Alexander S. Vindman, a decorated Iraq war veteran who served on the staff of the White House’s National Security Council, is among scores of officers who have been picked to be promoted to full colonel this year. Typically, such promotions are backed by Army and Pentagon officials before moving to the White House for final approval and then to the Senate for a confirmation vote. The latest promotion list is now with the Pentagon’s personnel office.

But some military officials fear Mr. Trump’s antipathy toward Colonel Vindman could sink the officer’s promotion, despite promises from Defense Secretary Mark T. Esper and other senior military leaders to protect from retribution members of the armed services who return to military duties after serving tours at the White House.

Derailing Colonel Vindman’s promotion over the Pentagon’s objections could increase strains on Mr. Trump’s already frayed relations with the military in the wake of the president’s response to growing racial tensions and civil unrest in the country.

In his role as a Ukraine expert on the council, Colonel Vindman was on Mr. Trump’s phone call on July 25 with Ukraine’s president that later led to the impeachment inquiry. Colonel Vindman testified in the House impeachment hearings that it was “improper for the president” to coerce a foreign country to investigate a political opponent.

Hours before Colonel Vindman was marched out of the White House by security guards in February, Mr. Trump foreshadowed his fate when asked if he would be pushed out. “Well, I’m not happy with him,” the president told reporters. “You think I’m supposed to be happy with him? I’m not.”

There is no indication so far that Mr. Trump is personally involved in blocking Colonel Vindman’s promotion, a concern first reported by the Washington Post. A White House spokesman referred questions to the Pentagon. Lisa Lawrence, a Pentagon spokeswoman, said in an email, without directly commenting on Colonel Vindman, “This list and any names on it have been and will be treated as is customary.”

But some Pentagon officials say that White House aides have signaled their desire to have Colonel Vindman’s name dropped from the promotion list before it is forwarded to the White House. When Colonel Vindman was dismissed from his National Security Council staff position shortly after the Senate acquitted Mr. Trump, the White House made no effort to portray the ouster as anything other than a reprisal.

One Defense Department official, who spoke on the condition of anonymity to discuss personnel matters, said Pentagon officials are seeking to stand firm by forwarding the promotion list with Colonel Vindman’s name included, and forcing the White House to take responsibility for any changes it might make before sending the list to the Senate. Colonel Vindman has been scheduled to attend the National War College in July.

“We protect all of our persons, service members, from retribution or anything like that,” Mr. Esper told reporters earlier this year.

Since the House impeachment hearings, Colonel Vindman has been subjected to virulent attacks on his patriotism on Fox News and social media.

The president called him a “Never Trumper,” a term the colonel rejected. Fox aired a segment suggesting his service in the White House might amount to “espionage.” And Senator Marsha Blackburn, Republican of Tennessee, attacked him on Twitter: “How patriotic is it to badmouth and ridicule our great nation in front of Russia, America’s greatest enemy?”