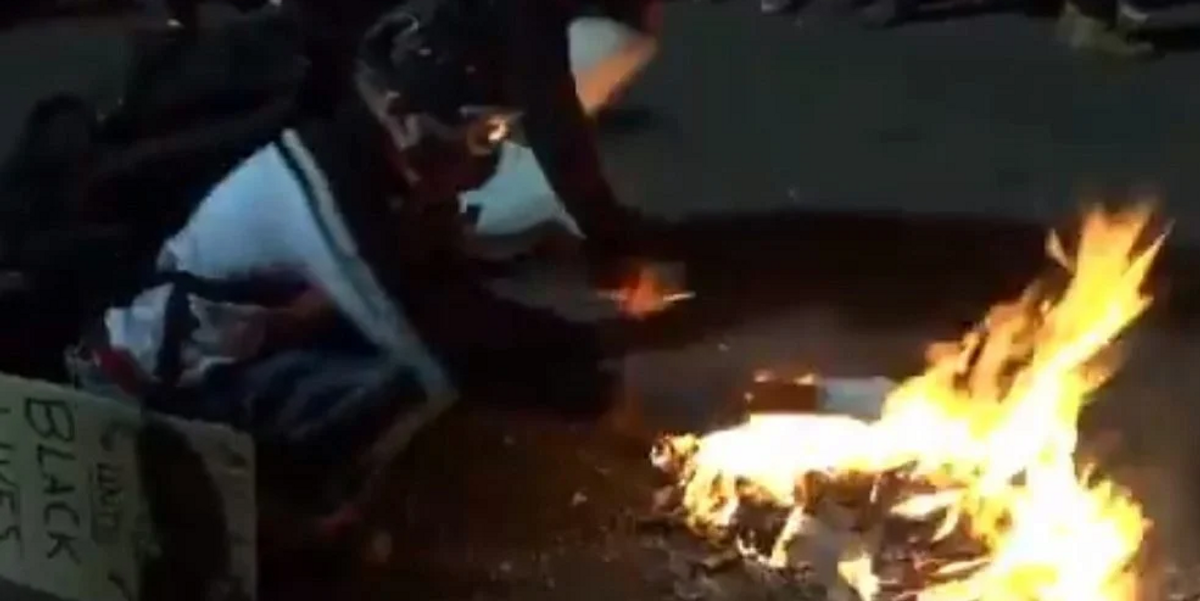 Protests and riots have been waged in Portland for over two months since the death of George Floyd. During Friday night’s protests, demonstrators exhibited their rage by burning Bibles and American flags.

In the street outside of the Mark O. Hatfield Courthouse, protesters set bibles and American flags on fire. Video shows demonstrators create a bonfire in the street, and protesters with “Black Lives Matter” signs toss Bibles into the inferno.

Sen. Ted Cruz (R-Texas) retweeted the Bible-burning video with the caption, “This is who they are.”

Donald Trump Jr. commented on the video of Bibles being set on fire. “Now we move to the book burning phase,” he wrote on Twitter. “I’m pretty sure ANTIFA doesn’t actually stand for what they say it stands for. Maybe just remove the anti part of them name and it’s perfect.”

Protesters dumped garbage in front of the Justice Center and battered the garage door of the courthouse to agitate federal officers. Rioters also set large fires around downtown Portland.

Agitator’s continue to dump garbage in front of the JC Salmon exit. CBP clears the hazard and agitators begin to pr… https://t.co/MY9TtM09bJ

Agitators trying to provoke a response from federal officers. Violently battering the door with kicks and using the… https://t.co/hqjiN7P8b7

One rioter nearly burned his own face after igniting a firework.

FAIL: ANTIFA THUG GETS OWNED BY HIS OWN EXPLOSIVE https://t.co/E3q7J1bHl3

There was a shooting in Portland on Friday night where more than 150 rounds were fired, one hitting a woman.

“East Precinct officers have secured the crime scene and determined that more that 150 rounds were fired outside of an apartment building,” the Portland Police Bureau stated. “One round struck an adult female victim in an arm. Responding officers applied a tourniquet and she was transported to the hospital by ambulance with what are believed to be non-life threatening injuries. No other injuries have been reported to police, however bullets struck at least 8 occupied apartments and 7 vehicles (unknown if occupied).”

During Thursday night’s demonstrations, agitators set fire to a severed pig’s head that was wearing a police officer hat outside the Justice Center in downtown Portland.

Fox News reporter William La Jeunesse was embedded with federal officers in Portland for 12 hours this week. He witnessed officers get attacked with lasers and fireworks.

“It’s really loud and very disconcerting when you’re on the inside,” he said. “And these things, when they burn up in front of you, they burn agents’ legs and arms and neck, stuff like that. They’ve got to go in for treatment.”