WASHINGTON — People who gathered outside the White House to protest police brutality spent Monday waving signs and screaming for justice. They watched as police officers and National Guard units flooded Lafayette Square, delivering on a threat made by President Trump. And just before the city’s 7 p.m. curfew went into effect, they were hit with flash-bang explosions and doused with tear gas.

It was because the president, who spent part of the weekend in a secure bunker as protests roiled, wanted to have his picture taken holding a Bible at a battered church just beyond the gates.

That church, St. John’s — the so-called Church of the Presidents because every one since James Madison has attended — had been briefly set ablaze as the protests devolved on Sunday evening. After Mr. Trump’s aides spent much of Monday expressing outrage over the burning of a place of worship, Hope Hicks, a presidential adviser, eventually hatched a plan with others at the White House to have the president walk over to the building, according to an official familiar with the events.

As Mr. Trump delivered a speech in the Rose Garden vowing to send the military to states where governors could not bring rioting under control but calling himself “an ally of all peaceful protesters,” the sound of explosions and the yells of demonstrators could be heard. After receiving repeated warnings to disperse before the city’s curfew, the crowd was tear-gassed.

Mr. Trump began his walk to the church at 7:01 p.m. for a photo session that lasted about 17 minutes. On his way over, after protesters had been driven from the park, he was trailed by a group of aides, including Attorney General William P. Barr. Mr. Barr had strolled to the edge of the police line to observe the crowd in the minutes before the tear-gassing began.

He walked alongside Jared Kushner, the president’s son-in-law and senior adviser, and Ivanka Trump, his eldest daughter and senior adviser. Ms. Trump was wearing a mask, one of the few visible reminders on Monday that the administration was in the middle of battling a public health crisis. Kayleigh McEnany, the White House press secretary, Ms. Hicks and Mark Meadows, Mr. Trump’s chief of staff, were also among the cadre of aides.

As police sirens blared in the background, Mr. Trump, his lips set in a thin line, stood with his back to the boarded-up, graffiti-laden facade of the buttermilk yellow church.

He cradled a Bible, bouncing it in his hands as if testing its weight.

“Is that your Bible?” a reporter yelled.

“It’s a Bible,” Mr. Trump responded, and hoisted up the book so reporters could see.

The bishop of the Episcopal Diocese of Washington, who watched the scene unfold while away from the church visiting with her mother, said church officials were not told of the plan and expressed outrage at the White House’s use of riot-control tactics on a generally peaceful crowd to clear a path for the president.

“He did not pray,” the bishop, Mariann E. Budde, said in an interview. Referring to the death of the black man in police custody that set off the protests, she added: “He did not mention George Floyd, he did not mention the agony of people who have been subjected to this kind of horrific expression of racism and white supremacy for hundreds of years. We need a president who can unify and heal. He has done the opposite of that, and we are left to pick up the pieces.” 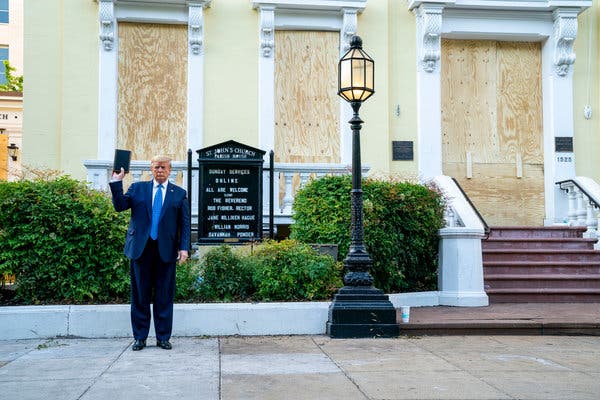 President Trump outside St. John’s Episcopal Church, which was damaged during a night of unrest near the White House.Credit…Doug Mills/The New York Times

In Lafayette Square, one of the visiting priests attending to St. John’s was sprayed with tear gas as she tried to help scared demonstrators leave the area, said Bishop Budde, who was not at the church when Mr. Trump visited.

Bishop Budde denounced the way the president held up a Bible during his visit, a move she interpreted as a political prop.

The president has been an infrequent visitor to St. John’s, but attended a church service there on the day of his inauguration. Since his election, the church has been dragged into the backdrop of some of Mr. Trump’s most partisan fights. Last spring, Robert S. Mueller III, the special counsel who led the investigation surrounding the Trump campaign’s ties to Russian interference in the 2016 election, drew a gawking crowd outside St. John’s before his report was released.