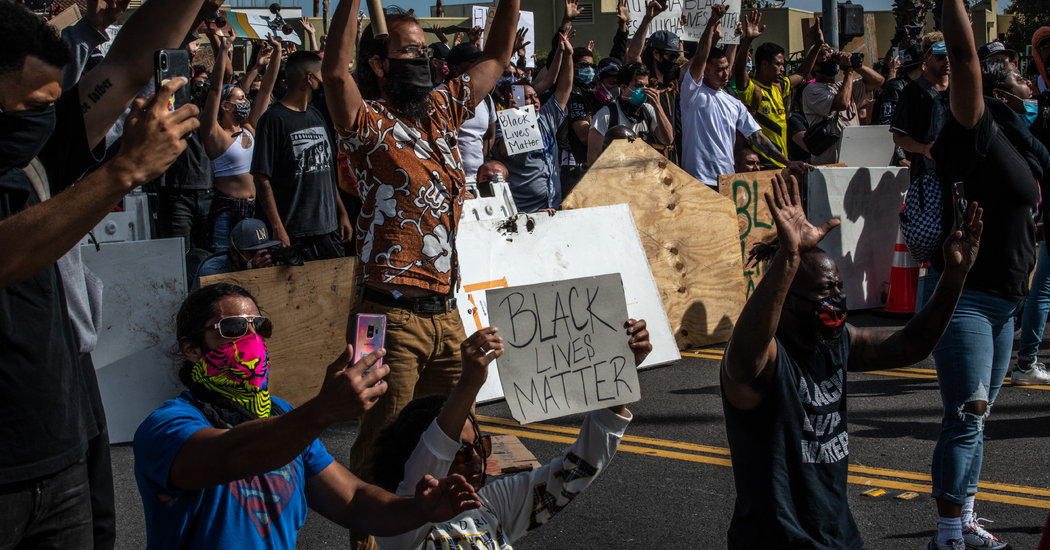 The mass protests that have swept the nation in recent days to express outrage at the death of George Floyd have been paired with a flood of financial donations, as hundreds of thousands of Americans have opened their wallets to give to charitable groups, community bail funds and Democratic candidates.

The Minnesota Freedom Fund, which pays bail for those who cannot afford it and received online support from some celebrities, took in a remarkable $20 million in a matter of days — so much that its website was now encouraging donors to give elsewhere.

A GoFundMe memorial fund established by Mr. Floyd’s brother had raised more than $7 million from more than a quarter-million contributors.

And on ActBlue, the central online hub that processes money for Democratic candidates and causes, Sunday was the single largest day of giving in all of 2020, with donations of $19 million, according to a New York Times analysis of the site’s donation tracker.

Then donors set another record for the year on Monday, topping $20 million shortly after 9 p.m.

The sums given on ActBlue on both Sunday and Monday topped all the presidential primary debate nights and election nights in 2020, and were more than double the amount given on the final day of April (monthly deadlines tend to drive online political giving). The previous high for the year was the day in late February when former Vice President Joseph R. Biden Jr. won the South Carolina Democratic primary and revived his campaign for president; donors contributed $18.3 million that day.

In all, ActBlue processed more than $60 million between Friday and Monday, a sign that the energy spilling into the streets nationwide might also be matched by a wave of money for Democratic causes. (The closest Republican equivalent of ActBlue, called WinRed, does not have a public donation ticker.)

ActBlue does not disclose in real time how donations to the platform are divided between candidates and causes, but a spokesperson for the site said half of the donations on Sunday went to charitable causes.

One ActBlue page where supporters could split a donation across 37 different bail funds reported more than 20,000 donations worth about $1.5 million as of late Monday morning. Such funds help cover the costs of posting cash bail for those jailed before trials, and are seen as a way to support protesters who have been arrested.

So much money is flowing so fast it is hard to keep track.

On Sunday evening, Senator Bernie Sanders emailed his enormous list of supporters asking them to donate to a different group of charities. The email alone raised $400,000 in its first 12 hours, according to Mike Casca, a spokesman for Mr. Sanders.

One nonprofit in Minneapolis, the Lake Street Council, reported raising $2.25 million as of Monday morning from 27,000 donors. It said it would use the money to help rebuild businesses, “many of which are black- or minority-owned.”

In Illinois, the Chicago Community Bail Fund reported receiving more than $1.6 million from 30,000 people. An effort in Los Angeles, the People’s City Council Freedom Fund, went viral and jumped from $1,500 raised as of early Saturday to more than $860,000 on Monday from more than 21,000 contributors.

“Watching the numbers climb was surreal,” said Sabrina Johnson, an organizer with the Los Angeles group, which was initially raising funds to pay for tickets people received in April protesting the mayor’s response to the coronavirus. Ms. Johnson said the fund was now partnering with a local chapter of Black Lives Matter and the National Lawyers Guild, a progressive group, to distribute the windfall.

The group posted a cautionary note on Twitter after donating went viral. “If you share it,” it wrote of its GoFundMe page, “please let your followers know it’s not just a bail fund!”

For the Minnesota Freedom Fund, which posted a note directing people to other organizations on Saturday, the volume of money was staggering. In the group’s most recent tax form available online, from 2018, it reported receiving $110,000 in donations.

“We have been flooded with tens of thousands donations large and small, totaling around $20 million dollars,” the group said in a note. “We did not ask for or anticipate this massive outpouring of support.”