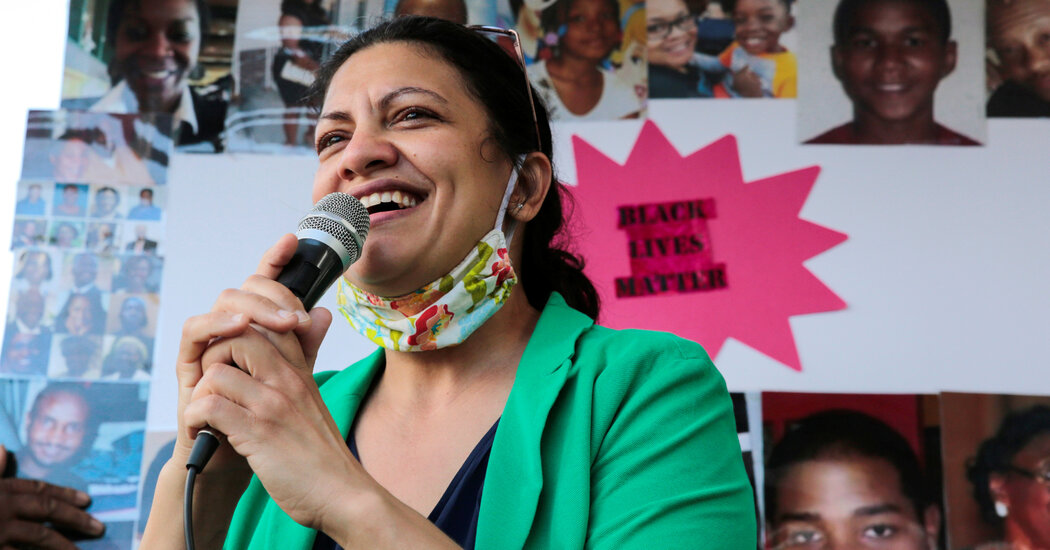 Representative Rashida Tlaib, Democrat of Michigan, beat back a primary challenge Tuesday from a repeat rival, significantly widening her 2018 margin of victory and helping to cement the staying power of the progressive women of color who have shaped the party’s House majority.

Ms. Tlaib, 44, defeated Brenda Jones, 60, the president of the Detroit City Council, The Associated Press reported on Wednesday morning. With 90 percent of votes counted, Ms. Tlaib had 66 percent of the vote to Ms. Jones’s 34 percent.

It was a flag-planting moment for Ms. Tlaib in her predominantly Black district, which includes portions of Detroit and its suburbs, as she easily defeated a prominent African-American leader with whom she split election wins two years ago.

“Voters sent a clear message that they’re done waiting for transformative change, that they want an unapologetic fighter who will take on the status quo and win,” Ms. Tlaib said in a statement on Wednesday.

Catapulted to national prominence by a profane call to impeach President Trump uttered on the day she was sworn in, and insulted with racist tropes by Mr. Trump, Ms. Tlaib has become one of the best-known members of Congress. She is a member of the so-called squad, a group of progressive Democratic women of color, including Representative Alexandria Ocasio-Cortez of New York, who were elected to the House in 2018 and have come to embody the vanguard of the party.

“We have a resounding mandate to put people before profits,” Ms. Tlaib said in her victory statement. “Let it be known that in the 13th District, just like in communities across our country, we are done with establishment politics that put corporations first. If I was considered the most vulnerable member of the squad, I think it’s safe to say the squad is here to stay, and it’s only getting bigger.”

Two years ago, Ms. Jones eked out a two-point victory over Ms. Tlaib in a special primary election to finish the remainder of the term of John Conyers, the long-serving congressman who had abruptly resigned. In a six-way primary held the same day, Ms. Tlaib then defeated Ms. Jones to win the nomination for the race to succeed him, effectively ensuring she would win the election for the next full term in the solidly Democratic district.

That outcome prompted bad blood on both sides, and Ms. Jones vowed to reclaim the seat.

This year, Ms. Jones has leveled withering criticism against Ms. Tlaib, arguing that she had become too preoccupied with national issues to tend to her district. Ms. Jones also pledged to start her own “squad” on Capitol Hill, focused on helping the country’s poorest neighborhoods.

But Ms. Tlaib, a Palestinian-American who made history in 2018 as one of the first two Muslim women elected to Congress, posted strong fund-raising numbers, bringing in more than $3 million compared with just $165,000 for Ms. Jones. She secured the endorsement of Speaker Nancy Pelosi and a wide range of unions and highlighted her deep connections to the district, opening four community offices, holding more town hall-style events than most in Congress, and ensuring funding for her district in coronavirus relief legislation.

The race pitted two overlapping and often allied Democratic constituencies — Black Americans and the progressive left — against each other. But Ms. Pelosi’s endorsement put the weight of the party establishment behind Ms. Tlaib.

Ms. Pelosi called Ms. Tlaib “a tireless advocate” for her constituents, and said she “never stops fighting for her district, which she is proud to represent.”

Ms. Tlaib’s victory came after a strong Election Day for the liberal wing of the party, with Cori Bush, a progressive activist and a leader of the swelling protest movement for racial justice, toppling Representative William Lacy Clay Jr. of Missouri, the latest in a series of losses for establishment Democrats.

A progressive in the mold of Senator Bernie Sanders of Vermont, Ms. Tlaib first gained national attention after her victory in 2018, when Ms. Ocasio-Cortez posted a photo of the two of them along with Ayanna S. Pressley of Massachusetts and Ilhan Omar of Minnesota — all representatives-elect at the time — with the caption “Squad.”

While they initially clashed with centrists and with Ms. Pelosi herself, they have more recently found ways to build their strength within the ranks of the party.

Ms. Ocasio-Cortez, the best-known of the group, cruised to a dominant primary victory in June. Ms. Pressley is unopposed.

Ms. Omar is facing a vigorous primary challenge from the lawyer Antone Melton-Meaux, who recently raised more than $3 million for his bid to unseat her. Her primary election is next week.