Protesters have burned down the Wendy’s restaurant in Atlanta where a black man was shot by police as he tried to escape arrest, and blocked a major highway in the city.

Rayshard Brooks, 27, was shot dead on Friday night after police were called to the restaurant over reports that he had fallen asleep in the drive-through line.

‘He just doesn’t get it’: has Trump been left behind by America’s awakening on racism?

The incident, which was caught on video, looked set to fuel more nationwide demonstrations about the treatment of African Americans by police in the wake of the killing of George Floyd in Minneapolis. 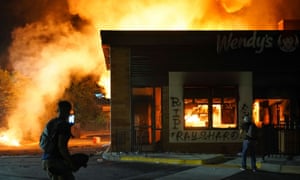 The unrest broke out after dark in Atlanta on Saturday, where earlier in the day mayor Keisha Lance Bottoms said she had accepted the prompt resignation of police chief Erika Shields over the death of Brooks.

Garrett Rolfe, the officer who allegedly shot Brooks, has been sacked, police spokesman Carlos Campos confirmed late on Saturday. The other officer involved, Devin Bronsan, who was hired in September 2018, has been placed on administrative duty. 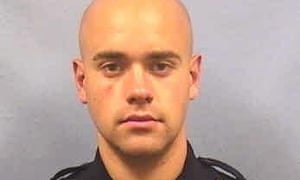 Images on local television showed the restaurant in flames for more than 45 minutes before fire crews arrived to extinguish the blaze, protected by a line of police officers.

By that time the building was reduced to charred rubble.

Other demonstrators marched onto Interstate-75, stopping traffic, before police used a line of squad cars to hold them back. 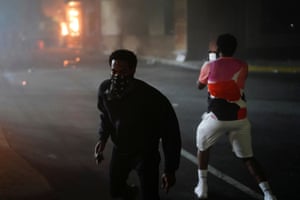 A man films a burning Wendy’s following a rally against racial inequality and the police shooting death of Rayshard Brooks, in Atlanta. Photograph: Elijah Nouvelage/Reuters

“I do not believe that this was a justified use of deadly force,” Bottoms said at an afternoon news conference.

Brooks was the father of a young daughter who was celebrating her birthday on Saturday, his lawyers said. His death from a police bullet came after more than two weeks of demonstrations in major cities across the United States in the name of Floyd, a 46-year-old black man who died on May 25 under the knee of a Minneapolis police officer.

Video shot by a bystander captures Brooks struggling with two officers on the ground outside the Wendy’s before breaking free and running across the parking lot with what appears to be a police Taser in his hand.

A second video from the restaurant’s cameras shows Brooks turning as he runs and possibly aiming the Taser at the pursuing officers before one of them fires his gun and Brooks falls to the ground.

Brooks ran the length of about six cars when he turned back toward an officer and pointed what he had in his hand at the policeman, said Vic Reynolds, director of the GBI at a separate press conference.

Officers attempted to take him into custody after he failed a field sobriety test, according to the Georgia Bureau of Investigation.

Chris Stewart, an attorney for Brooks’ family, said the officer who shot him should be charged for an unjustified use of deadly force, which equals murder.

“You can’t have it both ways in law enforcement,” Stewart said. “You can’t say a Taser is a non-lethal weapon … but when an African American grabs it and runs with it, now its some kind of deadly, lethal weapon that calls for you to unload on somebody.” 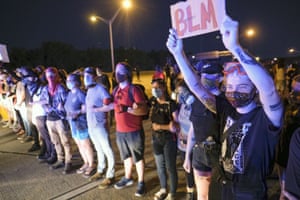 Demonstrators block the I75 highway in Atlanta on Saturday. Photograph: Ben Gray/AP

Demonstrators on the streets on Saturday night included members of Brooks’ family.

Among those protesting was Crystal Brooks, who said she is Rayshard Brooks’ sister-in-law.

“He wasnt causing anyone any harm,” she said. ‘“The police went up to the car and even though the car was parked they pulled him out of the car and started tussling with him.”

She added: “He did grab the Taser, but he just grabbed the Taser and ran.”

Reuters and Associated Press contributed to this report.