The Kishi’s analog sticks are almost identical to those on a Switch Joy-Con. They’re large enough for my tiny hands, but I suspect some will prefer the heftier sticks found on Sony’s DualShock 4 or the Switch Pro controller. Unlike Nintendo’s Joy-Cons, they have a convex top that makes them slightly easier to click. I do wish the outer rim was coated in a grippier material, though, similar to the official Xbox One controller. Sometimes my fingers would shift and slide around on the sticks — never to the point where they came off, but enough for me to worry during a tense Fortnite showdown.

The face buttons (A, B, X and Y) on the right are slightly larger than the ones on Nintendo’s portable system. The left side of the Kishi, meanwhile, has a traditional cross-shaped D-Pad. It’s a welcome change from the Switch’s separated arrow buttons. (An understandable compromise so you can break off and use the Joy-Con as a standalone controller). I’m grateful for the D-pad, though it feels a bit spongy and imprecise. The bumpers are small but clicky, and the twin triggers have a surprising amount of travel for shooters and racing games.

Unfortunately, the back of the peripheral doesn’t feel as polished. There’s no obvious place to rest your fingers, which feels like a bizarre oversight. My confused digits eventually settled in the recessed areas between the rubber belt. It never felt natural or comfortable, though. If Razer and Gamevice release a successor, I hope it has proper grips on the back or at minimum some kind of rubberized material similar to the PlayStation Vita. 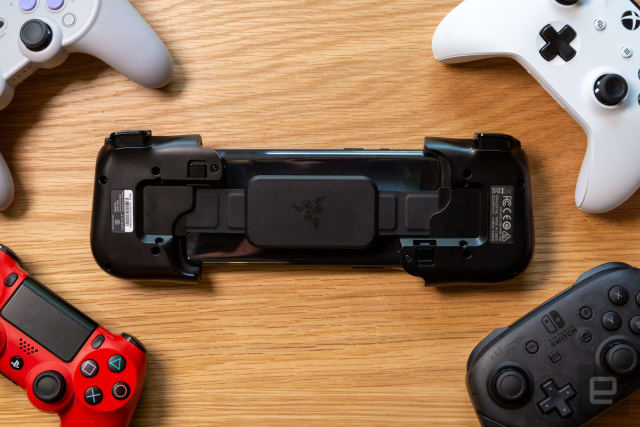 Where am I supposed to put my fingers?

But hey, at least you don’t need to charge it. Unlike most Bluetooth controllers — which include full-size pads and Switch-style peripherals like the Flydigi Wee 2T — there’s no separate battery to worry about. The Kishi also supports passthrough charging, which means you can top up your phone while the controller is still connected. Wisely, the port is on the bottom of the Kishi’s right-hand grip, ensuring your wrist, fingers and thumbs aren’t constantly brushing against a cable. It doesn’t support USB-C headphones, though, so you’ll need to make do with your phone’s built-in speaker making it through two thin slots on the right-hand side of the Kishi or a pair of Bluetooth-connected buds or cans.

Razer has an optional app to help you discover controller-friendly games. There’s also a launcher section that highlights “fully supported” apps on your phone. It’s a nice idea, but the software is a little dull and half-baked. I tried the Kishi with a number of native Android applications including Fortnite, Minecraft, Grand Theft Auto: Vice City and Sky: Child of Light. The controller worked instantly and flawlessly with all of these games. I was particularly impressed with Asphalt 9: Legends, though, which lets you choose between finger-friendly Touchdrive controls and a completely manual setup that plays identically to a console racing game.

Conversely, some games didn’t work at all. These included the newly released Forza Street, Riot’s Legends of Runeterra, and select indie games including Oxenfree. The problem wasn’t unique to the Kishi — these games simply haven’t been optimized for physical controllers and won’t work with a DualShock 4 or 8Bitdo either. The sole exception I could find was Call of Duty Mobile. The Tencent-developed title doesn’t seem to work with the Kishi, despite supporting select Bluetooth controllers.

Razer is pitching the Kishi as a companion for early streaming adopters, too. If you own the correct smartphone, the Kishi will work with Google Stadia, Nvidia’s GeForce Now and Microsoft’s still-in-beta Project xCloud service. Thankfully, my OnePlus 8 is compatible with all three. I played the opening hours of Destiny 2 on Stadia, A Plague Tale: Innocence on GeForce Now (via a copy that I bought on Steam) and Forza Motorsport 7 on xCloud.