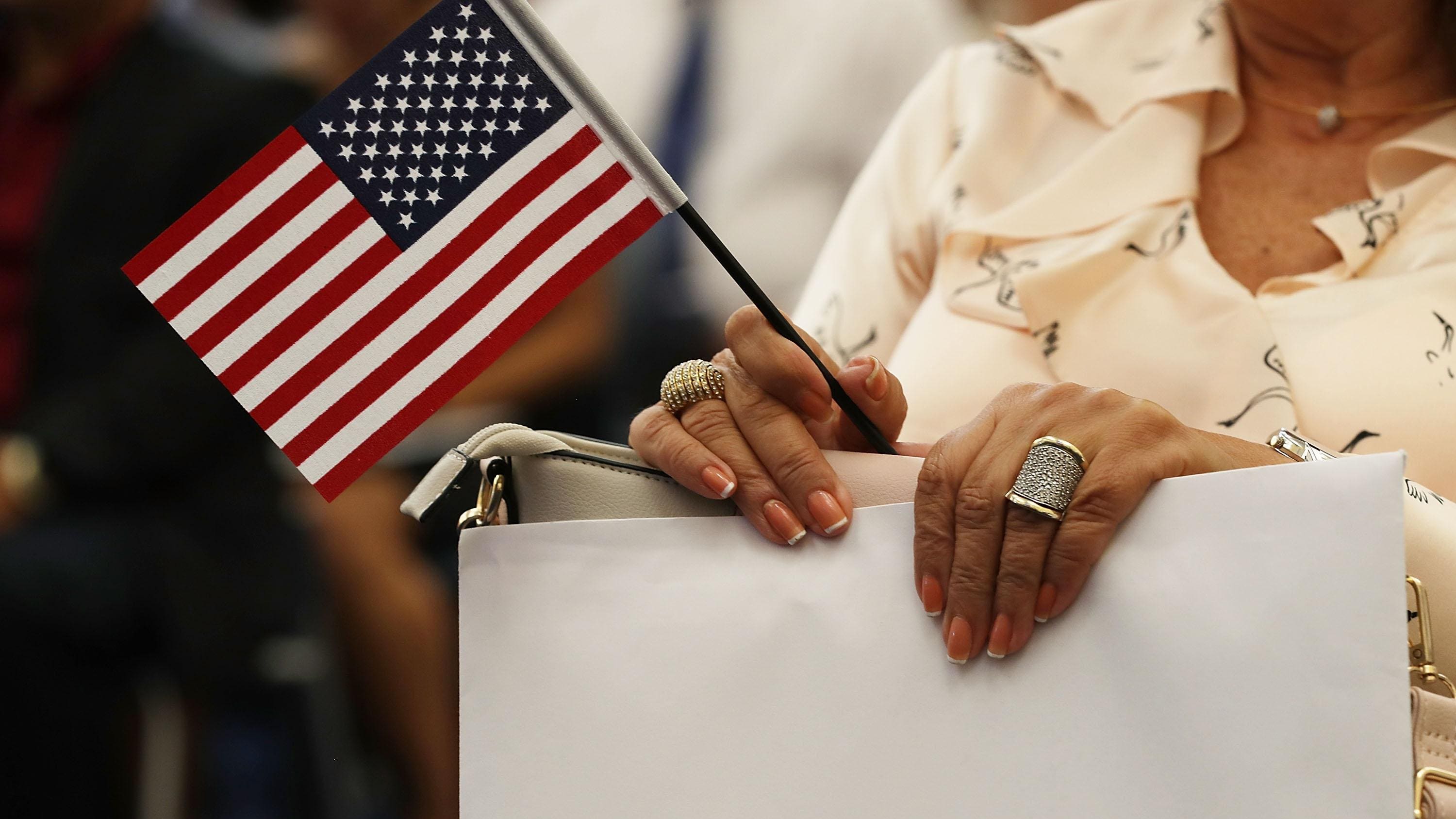 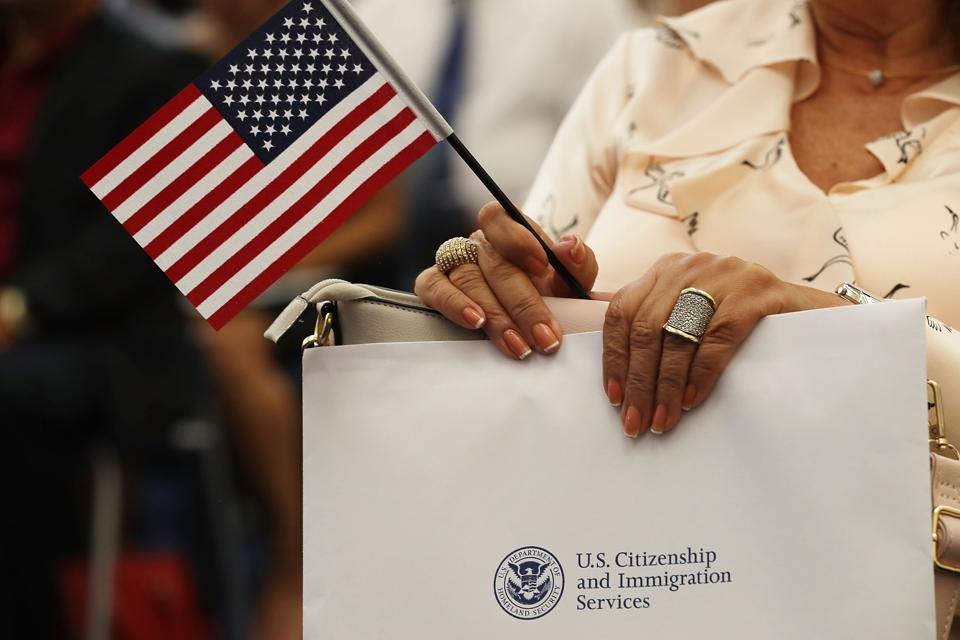 A individual holds an American flag as they participate in a ceremony at a U.S. Citizenship & … [+] Immigration Services ceremony at the Miami Field Office (Photo by Joe Raedle/Getty Images)

In the Trump administration’s potentially most consequential action to restrict high-skilled immigration, the Department of Homeland Security (DHS) has sent a new H-1B visa regulation to the Office of Management and Budget (OMB) for final review. The long-anticipated rule, which is expected to be published soon, is almost certain to be challenged in court.

The Trump administration has restricted H-1B visas more than any previous administration, but it has done so without issuing a new regulation. The denial rate for H-1B petitions for initial employment increased from 6% in FY 2015, before Donald Trump took office, to 29% through the second quarter of FY 2020, according to a recent analysis from the National Foundation for American Policy. “All the top 25 employers of new H-1B professionals had higher denial rates for H-1B petitions for initial employment in FY 2020 (through the second quarter) than in FY 2015.”

There are three elements of the new regulation that are the most significant: 1) The regulation will be published as an “interim final rule,” which would allow it to go into effect immediately without public input but also makes the rule more vulnerable to legal challenge; 2) The regulation will impose a new, restrictive definition of a “specialty occupation” for H-1B visa holders; and 3) The rule will make it more difficult for H-1B professionals to conduct work at third-party customer locations.

Interim Final Rule: “It’s bad news that the administration is moving forward with an interim final rule,” said William Stock of Klasko Immigration Law Partners, LLP in an interview. “The need for an interim rule, which prevents affected stakeholders from submitting comments before going into effect, will likely be explained as a response to the economic impact of the pandemic. Fortunately, an interim rule is less likely to survive court challenge on the narrow question of whether avoiding public input was necessary, as DHS previously saw with its interim final rule on Optional Practical Training.”

The real reason for the rush to publish an H-1B regulation may be a fear that Donald Trump will lose the election in November, not an economic emergency. The economic situation has improved since March and April, and the terms H-1B specialty occupation and employer-employee relationship have existed since 1990-91 – and were not changed during other periods of economic difficulty. Stock notes the Administrative Procedure Act (APA) only allows “good cause” exceptions to notice and comment rulemaking, and a judge in the D.C. Circuit in 2015 said that such exceptions are construed narrowly and without deference to the agency. (See here.)

“The agency lost a court challenge when it initially rolled out the STEM OPT regulation as an interim final rule,” said Jonathan Wasden, a partner with Wasden Banias, LLC, in an interview. “The agency was unable to justify the use of that mechanism and was forced to start the process over again.”

Restricting the Definition of a Specialty Occupation: A summary of the rule stated it would “revise the definition of specialty occupation.” Lawsuits U.S. Citizenship and Immigration Services (USCIS) lost earlier this year provide clues to the new regulation. (See here.)

Wasden believes that under the law and current regulation, if a degree is normal for U.S. workers in the position, then it qualifies as a specialty occupation, and he and other attorneys have argued that position successfully in court.

In a March 31, 2020, opinion, Taylor Made Software v. Kenneth T. Cuccinelli, U.S. District Judge Rudolph Contreras wrote that USCIS was wrong to declare that since “many computer systems analysts have liberal arts degrees and gained experience elsewhere . . . the proffered position cannot be” a specialty occupation. The judge noted the DOL Occupational Outlook Handbook states that a bachelor’s degree in computer or information science is “common, although not always a requirement.” He wrote that “common” should be interpreted as “normally.” He added, “Again, the regulatory criterion is not whether such a degree is always required,” as USCIS claimed.

Similarly, in another case, the judge cited the March 6, 2020, decision in 3Q Digital, Inc. v. USCIS: “[The regulation] does not say that a degree must always be required, yet the agency appears to have substituted the word ‘always’ for the word ‘normally.’ This is a misinterpretation and misapplication of the law.”

The Trump administration also made it clear how it wants to regulate high-skilled immigration in a case decided March 5, 2020. Sathish Kasilingam of InspectionXpert Corporation (IXC) had a master’s degree in mechanical engineering, but USCIS denied his H-1B petition because it said the company’s position did not require a degree in a specific subspecialty. “The issue here is that the field of engineering is a broad category that covers numerous and various specialties,” according to USCIS. The judge disagreed that USCIS could deny an H-1B petition because the position did not require a degree in a specific subspecialty and could be filled by someone with a degree in more than one discipline, such as different types of engineering degrees. The judge ruled, “That the [USCIS] Decision deemed an engineering degree requirement too generalized further confirms the unreasonableness of the [USCIS] Decision’s interpretation. . . . an engineering degree requirement meets the specialty occupation degree requirement.”

“If the regulation states a strict requirement that a bachelor’s degree or higher in a specific field must be the only way to qualify for employment in the occupation, it will greatly limit the use of an H-1B in computer-related professions as well as in new and growing fields like data analytics, where the background required usually comes from two distinct majors, computer science and statistics,” said Stock. “It will be more difficult to get H-1Bs for positions that require some computer science background but not necessarily an in-depth computer science degree, such as software quality assurance, some web programming and positions that are more coding than analysis.”

In a November 1, 2018, letter to Trump administration officials, the Compete America business coalition argued that USCIS was violating the statute by “denying an H-1B petition on the basis that the degree held by the sponsored foreign professional is not within a single field of acceptable study for an occupation.” According to the letter, “Nothing in the statute allows for administrative discretion to restrict a qualifying specialty occupation to only those occupations where ‘the specific specialty’ necessary for the job is only obtainable through completion of a single, exclusive degree.” (Emphasis in original.)

Restrictions on Work at Third-Party Customer Sites: It is incorrect to call the Trump administration’s immigration policies “conservative,” since its business immigration policies in particular contradict a fundamental conservative, free market principle – that companies should be able to hire who they consider most appropriate for a job and be free to make contracts with other companies to provide services without undue government interference.

The upcoming rule is likely to take the form of a heavy-handed government regulation that attempts to prevent U.S. companies from contracting with businesses that provide information technology (IT) services and employ foreign nationals on visas.

Beginning in 2018, USCIS started denying H-1B petitions under the theory that a contractor did not meet the definition of an employer when an H-1B professional performed work at a client’s site. In ITServe Alliance v. L. Francis Cissna, which USCIS lost and later settled, Judge Rosemary Collyer wrote, “The current USCIS interpretation of the employer-employee relationship requirement is inconsistent with its regulation, was announced and applied without rulemaking, and cannot be enforced.”

USCIS wants to overcome the judge’s opinion by drafting a new regulation and, it is expected, to move toward a radical interpretation of who is an employer that contradicts long-standing definitions that define an employer, as the Department of Labor does: “Has an employer-employee relationship with respect to employees under this part, as indicated by the fact that it may hire, pay, fire, supervise, or otherwise control the work of any such employee…” (The “or” is important.)

Judge Collyer noted USCIS denied H-1B petitions by arguing a company is not an H-1B professional’s employer if it did not control and supervise the H-1B visa holder’s work while at a third-party site. In 2018, a version of an H-1B labor condition application that was later withdrawn by the Department of Labor used the term “secondary employer.” Lawrence Lorber, who specializes in labor law at Seyfarth Shaw LLP, said, “Calling someone a secondary employer is nonsense.” If a homeowner or Apple contracts with and pays a company to provide landscaping services on a property, is the homeowner or Apple an “employer” of the individual who cuts the lawn and trims the hedges?

“I expect to see the regulation embody the legal theories on ‘employer-employee relationship’ that we saw in the guidance memos that were enjoined by a court earlier this year, requiring employers to document non-speculative employment for the full duration of the visa requested for third-party placements,” said Stock.

Before the March 20, 2020, ITServe opinion and later settlement, USCIS adjudicators might deny H-1B petitions unless employers could produce all contracts an H-1B professional would work on over a three-year period.

“The regulation is going to focus on work at a third-party site conforming to the length of the project and the H-1B petition only being issued for that time period, and even tracking how often they are at the third-party site,” said an executive at one technology company. “You can see that being a foundation for joint employment.”

Making it more burdensome to send people on-site harms efforts to protect data, noted the executive. For cybersecurity reasons, companies receiving services often prefer to have tech professionals come on-site because it helps protect data, said the executive, which means that a regulation to make it more burdensome to send people on-site may make data less secure by making cybersecurity a secondary priority, since more of the services would be delivered off-site, including outside the United States.

Government officials and others who ignore or won’t condede that the labor market is global seem to believe, despite the evidence, that companies won’t send work outside the United States in response to H-1B visa restrictions. “Foreign affiliate employment increased as a direct response to increasingly stringent restrictions on H-1B visas,” according to firm-level data in important research by Britta Glennon, an assistant professor at the Wharton School of Business. “[A]ny policies that are motivated by concerns about the loss of native jobs should consider that policies aimed at reducing immigration have the unintended consequence of encouraging firms to offshore jobs abroad.”

“IT outsourcing has evolved from relatively simple tasks to much more complex software development,” notes the Wall Street Journal. “[Pennsylvania-based] EPAM developers, scattered across more than 160 offices in multiple time zones using Microsoft’s collaboration software, Teams, routinely work on a single project. For example, developers in Hungary, Belarus, Ukraine, and the U.S. are working on booking platforms for a major online travel company.”

What will be the impact of the new H-1B regulation? “All of the changes in the regulation are likely to be resisted by employers as inconsistent with the statute and economically harmful,” said William Stock. “If allowed to go into effect, the regulation will continue the current trend of employers sending high-value technology work offshore because of policies from this administration that are keeping and pushing key personnel outside the United States.”