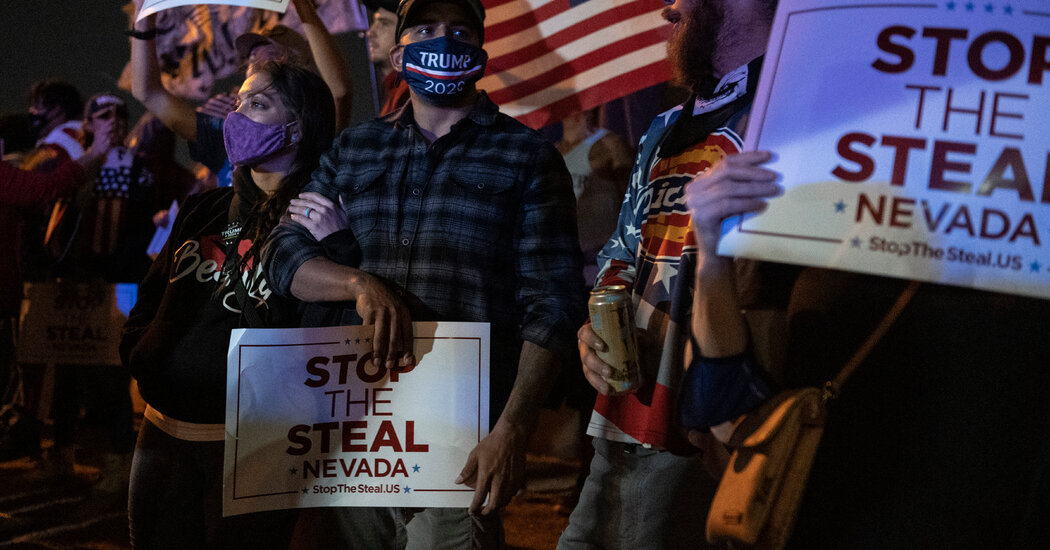 A Republican House candidate from Wisconsin says he is appalled by the violence he witnessed at the Jan. 6 rally that turned into the siege at the Capitol. But he did not disagree with G.O.P. lawmakers’ effort to overturn the presidential election results that night.

In Michigan, a woman known as the “MAGA bride” after photos of her Donald J. Trump-themed wedding dress went viral is running for Congress while falsely claiming that it is “highly probable” the former president carried her state and won re-election.

And in Washington State, the Republican nominee for governor last year is making a bid for Congress months after finally dropping a lawsuit challenging his 2020 defeat — a contest he lost by 545,000 votes.

Across the country, a rising class of Republican challengers has embraced the fiction that the 2020 election was illegitimate, marred by fraud and inconsistencies. Aggressively pushing Mr. Trump’s baseless claims that he was robbed of re-election, these candidates represent the next generation of aspiring G.O.P. leaders, who would bring to Congress the real possibility that the party’s assault on the legitimacy of elections, a bedrock principle of American democracy, could continue through the 2024 contests.

Dozens of Republican candidates have sown doubts about the election as they seek to join the ranks of the 147 Republicans in Congress who voted against certifying President Biden’s victory. There are degrees of denial: Some bluntly declare they must repair a rigged system that produced a flawed result, while others speak in the language of “election integrity,” promoting Republican re-examinations of the vote counts in Arizona and Georgia and backing new voting restrictions introduced by Republicans in battleground states.

They are united by a near-universal reluctance to state outright that Mr. Biden is the legitimately elected leader of the country.

“I would not have voted to certify Jan. 6, not without more questions,” said Sam Peters, a Nevada Republican who is campaigning for a Las Vegas-area House seat. He said he was not sure that Mr. Biden had legitimately won Nevada, even though the president did so by more than 33,000 votes.

It’s unclear how long the reluctance to accept unfavorable electoral outcomes will remain a central focus of the party, and to what degree Republicans might support widespread election challenges up and down the ballot in the future.

But Republicans’ unwavering fealty to the voter fraud myth underscores an emerging dynamic of party politics: To build a campaign in the modern G.O.P., most candidates must embrace — or at least not openly deny — conspiracy theories and election lies, and they must commit to a mission of imposing greater voting restrictions and making it easier to challenge or even overturn an election’s results. The prevalence of such candidates in the nascent stages of the party primaries highlights how Mr. Trump’s willingness to embrace far-flung falsehoods has elevated fringe ideas to the mainstream of his party.

Over a year before the midterm elections, many of the fledgling primary races remain in flux, with scores of potential candidates still weighing bids. The Census Bureau’s delays in producing detailed population data have pushed the redistricting process back until at least September, which has impeded the recruitment of candidates for both parties.

The result is that Republicans who have jumped into campaigns early tend to be those most loyal to Mr. Trump and the party base. Several among this new class of Republicans are likely to win their races, helped by historical trends favoring the party out of the White House, and a head start on fund-raising and meeting potential voters.

Victories by these Republicans would expand the number of congressional lawmakers who have supported overturning the 2020 results, raising new doubts about whether Americans can still count on the routine, nonpartisan certification of free and fair elections.

Mr. Peters already has a list of questions he would ask before voting to certify the 2024 election results, should he be in Congress then.

Mr. Trump and his allies remain relentlessly focused on the false claims about the election. Steve Bannon, the on-and-off Trump adviser, said in an interview late last month with NBC News that challenging the results of the 2020 election was a “litmus test” for Republican candidates running in 2022 primary races. The former president has been pushing reviews of last year’s results, like a widely criticized Republican-commissioned audit in Arizona, and he continued his effort in a speech in North Carolina last weekend.

Some party strategists fear that the denials of the election outcome could hurt candidates who progress to the general election in the crucial swing districts Republicans must win to take control of Congress.

“It’s one of those things that is in the water with these very online, very loud and very active primary voters,” said David Kochel, a Republican strategist and veteran of Mitt Romney and Jeb Bush’s presidential campaigns. “It’s a problem and it’s dangerous for the party to continue to flirt with this conspiracy theory, but I don’t think Republicans are really paying a price for it.”

The election-skeptical Republicans span safe districts and battlegrounds. Derrick Van Orden, running for a second time in a Democratic-held district in western Wisconsin that Mr. Trump carried in 2020, published an op-ed article defending his attendance at the Jan. 6 rally near the Capitol, saying he had gone to “stand for the integrity of our electoral system.”

Many Republicans are simply trying to deflect the question of Mr. Biden’s legitimacy with pledges to crack down on voter fraud, rebuild “election integrity” and support more voting restrictions.

In December, State Senator Jen Kiggans of Virginia, campaigning for a competitive U.S. House seat based around Norfolk, issued a nearly 900-word statement on Facebook detailing her commitment to restoring “voter confidence” but making no mention of Mr. Biden or whether she disputed the 2020 results. (Her primary opponent, Jarome Bell, said during an interview with Mr. Bannon that people involved in election fraud should be sentenced “to death.”)

“I agree with you 100% that it is right to question the electoral process and to hold those accountable who are responsible for ensuring our elections are conducted fairly with the utmost integrity,” Ms. Kiggans wrote in her statement.

Even Republican candidates who acknowledge Mr. Biden as the legitimate winner say potential fraud needs to be addressed. Mary Ann Hanusa, a former official in President George W. Bush’s administration who is running for Congress in Iowa, said she would have voted to certify Mr. Biden’s victory on Jan. 6, but she added that because of the coronavirus, changes to voting practices in several states “were made outside of law and when you do that, it really opens up the door to fraud.”

Senate primaries so far seem to be competitions to decide which candidates can cast themselves as the strongest allies of Mr. Trump and his quixotic quest to overturn the election results.

Representative Mo Brooks of Alabama, who spoke at Mr. Trump’s Jan. 6 rally, is seeking a promotion to the Senate. Representative Ted Budd of North Carolina, whom Mr. Trump endorsed during his speech on Saturday night, introduced his Senate campaign with a video promising to “make sure our elections are fair” — a barely coded reference to Mr. Trump’s claims.

In Ohio, a super PAC called the USA Freedom Fund is attacking official and prospective candidates for being insufficiently loyal to the former president and “America First” principles, while backing Josh Mandel, the Republican former Ohio state treasurer.

“I am the only candidate in Ohio who gets up wherever he speaks around the state and has the guts to say this election was stolen from Donald J. Trump,” Mr. Mandel said last month on a podcast hosted by Mr. Bannon.

Perhaps no 2022 House candidate embodies the new Republican ethos more than Loren Culp, a former one-man police department from rural Republic, Wash., who made his name by refusing to enforce a new state gun law in 2018. He spent weeks refusing to concede the governor’s race last year, and he sued state officials before dropping his lawsuit in January under pressure from the state attorney general.

In an interview last week, Mr. Culp said he believed fraud had cost him the election, despite his loss by more than half a million votes to Gov. Jay Inslee, a Democrat.

Now Mr. Culp is running to unseat Representative Dan Newhouse, a four-term Republican from a conservative and largely rural central Washington district who voted to impeach Mr. Trump in January. Mr. Culp said that he had a better chance of winning a House election than a statewide one because, he argued, Washington’s all-mail election system makes fraud too easy to perpetuate in the Seattle area.

“I don’t believe that a real conservative will win a statewide race in Washington until we go back to in-person voting,” Mr. Culp said, echoing the skepticism of mail voting that Mr. Trump pushed for months leading into November. “Congressional districts are smaller geographical areas with less people dealing with the ballots. So it’s a whole lot easier to keep tabs on things.”

Republican candidates’ 2020 skepticism comes as the party’s base voters, moving in near-lockstep with Mr. Trump and influential voices in the conservative media, have told pollsters that they, too, believe Mr. Biden was not the legitimate winner. G.O.P. candidates say it does not take much for their constituents to raise questions about the election to them.

In South Carolina, Ken Richardson, a school board chairman who is challenging Representative Tom Rice, who voted to impeach Mr. Trump, said his events were regularly delayed because voters inundated him with questions about the election.

“When I go to give a speech, it takes 10 to 15 minutes before I can start, because the election is the first thing anybody wants to talk about,” Mr. Richardson, who said he would not have voted to certify the 2020 election, said in a recent interview. “I go ahead and let them get it out of their system and then I can get started.”

“There’s definitely a reason to doubt,” he added. “There’s doubt out there.”

And then there is Audra Johnson, who became briefly famous in 2019 after wearing a “Make America Great Again” wedding dress created by Andre Soriano, a conservative fashion designer.

Ms. Johnson is now running against Representative Peter Meijer of Michigan, a Republican who supported impeachment. She believes Mr. Trump was the rightful winner last year and said that, if elected, she would work to audit voting machines, enact a national voter identification law and create more “transparency” in election results.

“It’s coming down to the point where anybody can vote in our elections,” she said. “That’s not how the system is supposed to be set up.”