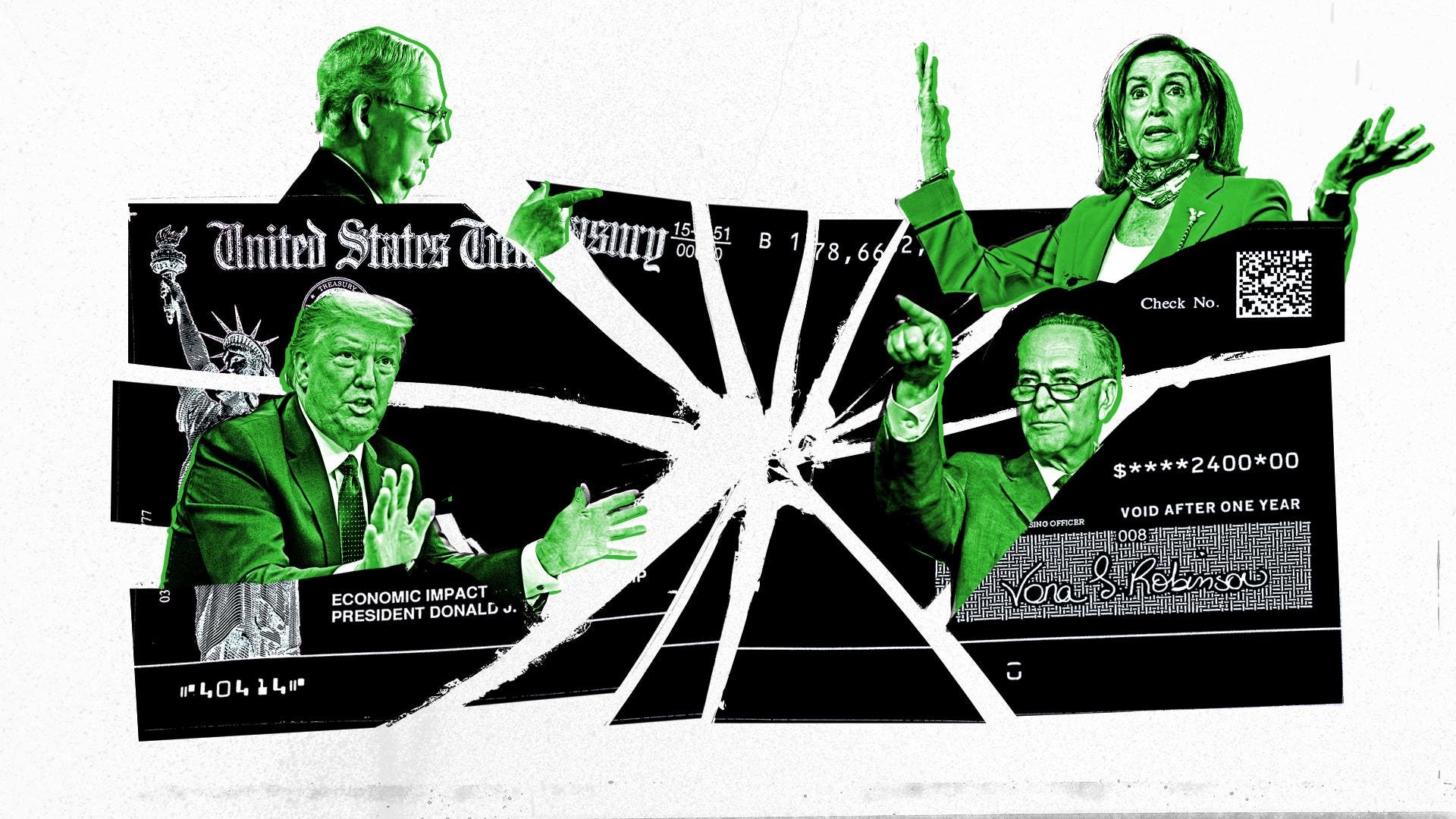 As benefits expire, rent comes due, the school year looms and states struggle, Washington’s warring factions are racing to rescue the economy—and their political fortunes. The coronavirus pandemic has taken an inconceivable toll on the American economy. It’s caused the highest unemployment rate since the Great Depression, decimated millions of small businesses, and set off a wave of big corporate bankruptcies.

Since March, Washington lawmakers have been scrambling to prevent a full-scale economic meltdown while managing a public health crisis. So far, they’ve passed four major pieces of coronavirus rescue legislation (more on that below) anchored by the $2.2 trillion Coronavirus Aid, Relief, and Economic Security (CARES) Act, the largest economic stimulus package in American history.

The road to the passage of the CARES Act on March 27 was rocky, at best. There were competing bills from each chamber of Congress, and accusations of partisanship flew freely as lawmakers maneuvered to get their own priorities written into the law—and blamed the other party for any delay. Senate Democrats blocked an early Republican version of the bill to force stricter oversight of corporate bailout money and more generous support for workers.

On May 15, House Democrats passed their own proposal for the next stimulus bill, which Senate Majority Leader Mitch McConnell (R-Ky.) has vowed will be the last. The House-passed $3 trillion Heroes Act, however, was never taken up by Senate Republicans, and Democrats have been left waiting for an opening proposal from the other side of the aisle to kick off negotiations in earnest in the coming days. Republicans, meanwhile, are reportedly fighting bitterly among themselves and struggling to agree on policy priorities.

With the election looming in November and a spike in Covid-19 cases already slowing reopening plans and threatening more economic damage, the fight could get ugly—even by D.C. standards.

We’ll be updating this page regularly as the drama plays out, with links to the developments you need to know.

Negotiations between Senate Republicans and the White House deteriorate ahead of the planned release of the GOP’s draft bill. Lawmakers and Trump administration officials fail to agree on key provisions like the extension of enhanced unemployment benefits and funding for coronavirus testing. The idea of splitting the legislation into several smaller packages is floated, only to be quickly rejected by Democrats.

No proposal is unveiled, even after Treasury Secretary Steven Mnuchin touts a “fundamental agreement” on the $1 trillion package and confirms the bill will include a provision for $1,200 stimulus checks—just like the CARES Act—and exclude a payroll tax cut.

With lawmakers looking increasingly unlikely to reach a deal before August, Senate Republicans confirm they are discussing a possible short-term extension of the $600-per-week enhanced federal unemployment benefits. That evening, White House chief of staff Mark Meadows indicates that the short term extension would be unlikely, and says he hopes lawmakers can find a “real solution” to the issue.

Senate Majority Leader Mitch McConnell confirms that he now supports a second stimulus check. He also indicates that the GOP’s proposal won’t include an extension of the $600 per week enhanced unemployment insurance, but rather an alternative to those benefits.

Congress returns to Washington after a two-week break. There’s just 11 days before the end of the month, when some key provisions of the CARES Act will expire, and three weeks before lawmakers’ next scheduled recess in August.

Democrats support sending another round of economic impact payments (a.k.a. stimulus checks), and a provision to do just that was included in the Heroes Act that passed the House in May. President Trump has also publicly supported sending a second round of checks. Republicans have been relatively divided on the issue; some have proposed lowering the income cap where the check begins to disappear to as little as $40,000, down from $75,000 for single filers and $150,000 for couples in the CARES Act.

The expanded unemployment payments authorized by the CARES Act—an extra $600 per week from the federal government—expire the last week of July. Democrats are adamant about extending the extra benefits, which they say have been a lifeline for the roughly 50 million people who have lost jobs or been furloughed as a result of the crisis. Republicans have argued that because the $600 supplement lets lower-wage workers receive more from unemployment than they earned at their regular jobs, the benefit should be reduced or eliminated in order to motivate Americans to get back to work. 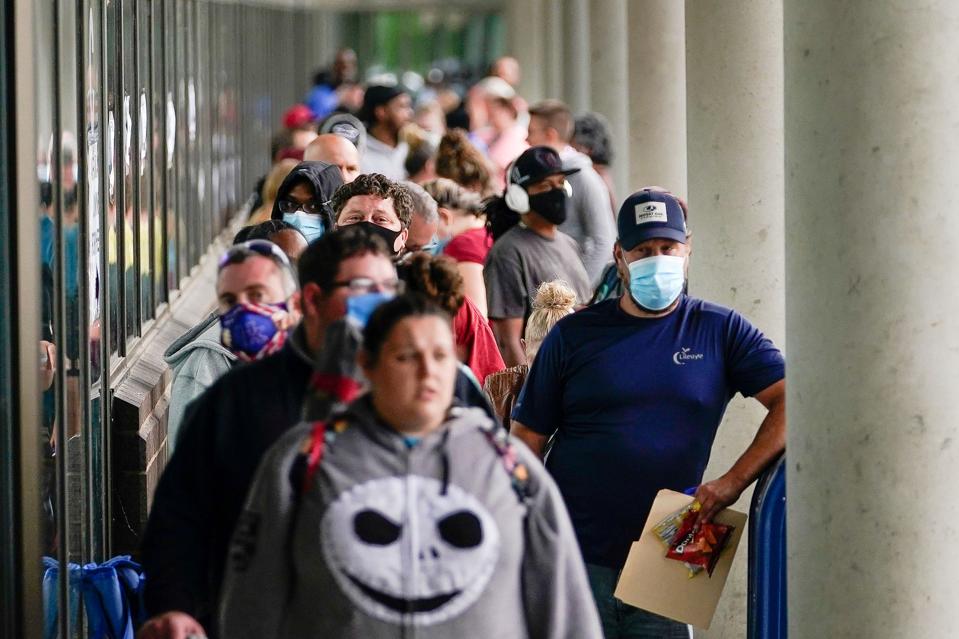 Hundreds of people lined up outside a career center in Frankfort, Kentucky in June to receive assistance with unemployment claims.

AID FOR STATE AND LOCAL GOVERNMENTS

The CARES Act provided $150 billion in direct aid to state and local governments (that’s on top of other virus-related money) to help them respond to the economic challenges created by the pandemic. Democrats say this wasn’t nearly enough, and the Heroes Act included roughly $1 trillion in state and local aid to make up for shrinking local tax revenues and to stave off state and local government layoffs. Some Republicans, wary of a ballooning national deficit and unwilling to bail out what they consider profligate blue state governments, oppose more aid.

Protecting reopened businesses from coronavirus-related lawsuits brought by workers or customers is a key priority for Senate Majority Leader Mitch McConnell and other Republican leaders, who have signaled that they will not pass a rescue bill that doesn’t include such protection. Democratic leaders, including House Speaker Nancy Pelosi, have said that relief legislation needs to prioritize workers, not companies, but some moderate Democrats have indicated that they are willing to compromise on the issue.

President Trump has been increasingly vocal about his desire for a payroll tax cut, which would reduce the amount of Social Security and Medicare tax paid. (Currently, the employer and employee each pay 7.65% in Social Security tax on the first $137,700 of wages, plus 1.45% in Medicare tax on all earnings.)  Trump has touted such a tax cut since before the Covid-19 crisis as an incentive for hiring. Some Republicans, though not all, have fallen in line behind the President on the issue. But critics say a payroll tax is poorly targeted because it only benefits those who are still employed and could undermine the already shaky long-term finances of Social Security.

With the new academic year looming, the issue of whether schools should physically reopen—and the federal funding that might be contingent on those reopenings—is suddenly front and center. Trump is demanding that schools reopen full time, and it’s possible that the GOP’s proposed legislation will withhold federal education funding from states that don’t fully reopen their K-12 schools.

Allocated $8.3 billion for federal agencies to respond to the pandemic by supporting public health initiatives and vaccine development.

A $100 billion package that bulked up private insurance and Medicare coverage to include Covid-19 testing, expanded unemployment insurance and provided paid sick and family leave (financed by the government) for some workers affected by the pandemic.

The largest economic rescue bill in American history, clocking in with a price tag of $2.2 trillion. Among other things, it established the Paycheck Protection Program (forgivable loans for small businesses), sent out the $1,200-per-adult stimulus checks, set up the extra $600 in federal unemployment benefits, bulked up funding for testing and public health, and set up bailout funds for big corporations (like airlines). It also provided temporary relief for those paying off federal student loans and some protection from mortgage foreclosures and evictions, as well as tax breaks for corporations and wealthy individuals with losses from certain businesses.

A $484 billion package passed by a scrambling Congress after the first $350 billion allocated to forgivable PPP loans ran out in just 13 days. It also included more funding for testing and healthcare providers.