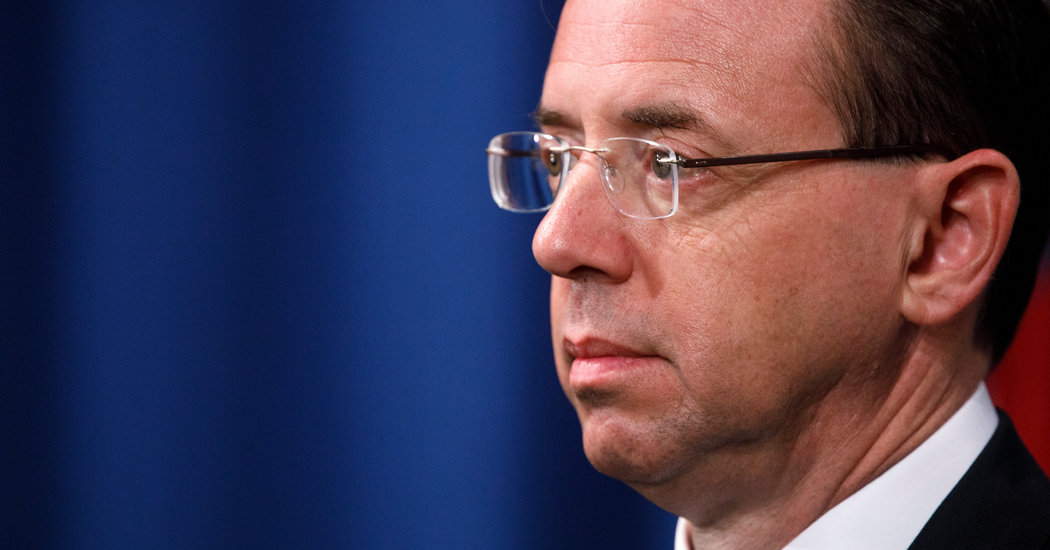 WASHINGTON — The former deputy attorney general Rod J. Rosenstein is expected to testify at 10 a.m. on Wednesday about his handling of the Trump-Russia investigation, as Republican allies of President Trump on the Senate Judiciary Committee seek to keep a skeptical spotlight on that matter heading into the fall’s election.

Mr. Rosenstein was a key figure in the investigation. He oversaw it as the acting attorney general for the inquiry because Attorney General Jeff Sessions recused himself over his role in the Trump campaign. Mr. Rosenstein appointed Robert S. Mueller III as special counsel in May 2017 and oversaw his work until Mr. Trump replaced Mr. Sessions in November 2018.

Although Mr. Rosenstein stepped down just over a year ago, he last testified before Congress in June 2018, well before the end of the Russia inquiry and other major related developments. They will most likely be fodder for questions by the chairman of the Judiciary Committee, Senator Lindsey Graham of South Carolina, and other senators on the panel.

Rosenstein was at the center of tumult early on.

Mr. Rosenstein was sworn in to the No. 2 post at the Justice Department just weeks before the president fired James B. Comey as the F.B.I. director, then publicly and privately linked the dismissal to the Russia investigation.

In the ensuing chaos, law enforcement officials debated whether to open an investigation into whether the president’s firing of Mr. Comey constituted obstruction of justice. Mr. Rosenstein suggested secretly recording his conversations with the president, who had enlisted him earlier to help draft an unrelated justification for ousting Mr. Comey. He also discussed the possibility of Mr. Trump’s cabinet removing him using the 25th Amendment.

Senators are expected to grill Mr. Rosenstein about those discussions, which he has said were not in earnest.

Senators may question Mr. Rosenstein about his discussions with Mr. Mueller, particularly about the possibility of subpoenaing the president. In March 2019, Mr. Mueller completed his report without subpoenaing Mr. Trump to require him to talk to investigators about such topics as what he knew about his campaign’s interactions with Russian representatives and with WikiLeaks, which published archives of emails Russia stole from Democrats.

Mr. Mueller testified that he was skeptical of written answers supplied by Mr. Trump, but also said Mr. Rosenstein had not stopped him from any specific investigative step he had decided to take.

Conservatives have attacked his appointment of Mueller.

Mr. Mueller’s investigators found that while the Russian government covertly intervened in the 2016 election with a goal of helping Mr. Trump defeat Hillary Clinton, and while the Trump campaign welcomed that assistance and had many links to Russian figures, the evidence was insufficient to prove any criminal conspiracy.

Attorney General William P. Barr has subsequently portrayed the entire investigation as illegitimate. Senators are expected to ask Mr. Rosenstein whether, knowing what he knows now, he would have appointed Mr. Mueller.

Rosenstein had a role in a plagued set of wiretap applications.

In December, the Justice Department’s independent inspector general, Michael E. Horowitz, released a damning report about errors and omissions by the F.B.I. in applications to obtain a national security wiretap order targeting Carter Page, a former Trump campaign adviser, in October 2016, as well as three renewal orders in 2017.

The Justice Department has subsequently told a court it did not think the available evidence met the legal standard to keep invading Mr. Page’s privacy for the last two renewals. Mr. Rosenstein signed off on the third and final renewal application for that surveillance, and senators are expected to question him about the matter.

The hearing is just a start for Republicans’ plan to showcase investigators’ missteps.

Mr. Trump, who is portraying the effort to understand the scope of Moscow’s covert manipulations and the nature of his campaign’s links to Russia as a partisan conspiracy to sabotage him, sees rewriting the narrative of the Russia investigation as a key to his re-election campaign. Republicans are keen to use their Senate majority to help.

On Thursday, Mr. Graham and Senator Ron Johnson, Republican of Wisconsin and the chairman of the Homeland Security and Governmental Affairs Committee, both plan to ask their respective panels to grant them substantial powers to issue subpoenas for reams of records related to the Russia investigation and for testimony from dozens of current and former law enforcement and national security officials, including prominent Obama administration officials.

The issues in question have already been exhaustively studied by Mr. Horowitz and are still being scrutinized by a federal prosecutor, John H. Durham, whom Mr. Barr handpicked to examine his concerns about the investigation. But where those inquiries largely take place out of view, Mr. Graham and Mr. Johnson are planning public hearings throughout the summer leading up to this fall’s elections that will emphasize the ways they believe Mr. Trump was mistreated.