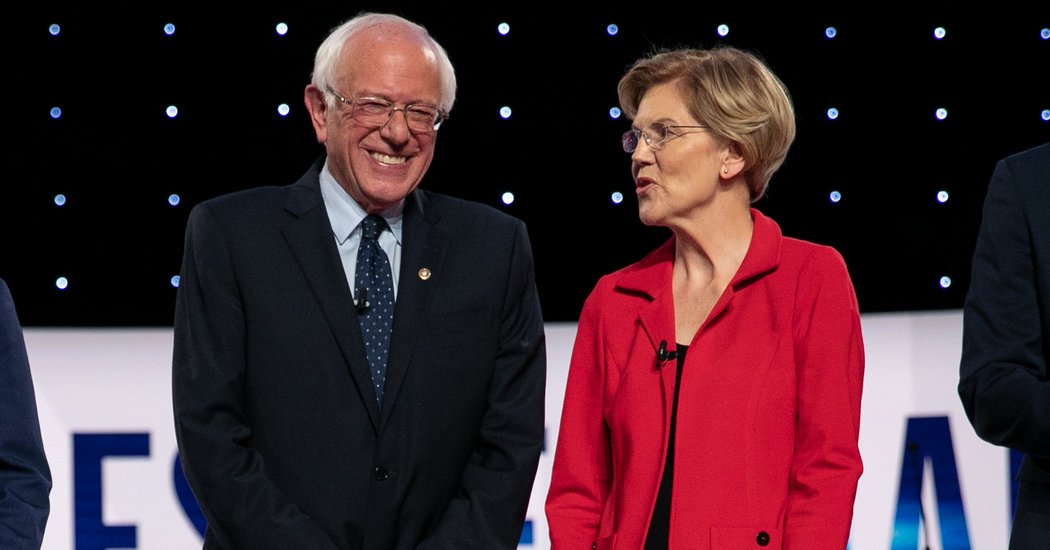 WASHINGTON — For a year they offered almost nothing but praise for each other in public, he paying tribute to her populism, she initially adopting his health care plan, and each supporting the other against moderates in the Democratic presidential debates and rebuking reporters who sought to stoke any suppressed rivalry.

The alliance between Senators Elizabeth Warren and Bernie Sanders was an extension of their rapport in the Capitol, which was more about mutual interest than personal friendship, but it remained largely intact through 2019 despite highs and lows for each candidate — even as they competed for the same set of voters.

But that relationship has now ruptured in extraordinary fashion, over whether he told her in a private meeting in 2018 that a woman couldn’t defeat President Trump. The breach runs a real risk of damaging liberal hopes of ultimately uniting Democratic Party factions around a progressive nominee in 2020.

A sizable, loud swath of left-wing activists are now furious at Ms. Warren for criticizing and challenging Mr. Sanders over gender and for employing hardball campaign tactics this week. Meanwhile, some progressive women and backers of Ms. Warren are angry at Mr. Sanders for disputing her and for not denouncing the #NeverWarren campaign by some of his online supporters.

Both candidates and their advisers have come to believe that the other camp is fighting dirty, according to interviews with campaign officials and surrogates. They have not spoken since their postdebate confrontation in Iowa on Tuesday night, and many liberals are starting to feel a painful sense that they’ve been here before.

“We can’t relive 2016,” said Randi Weingarten, the head of the American Federation of Teachers, referring to the split between pro-Sanders liberals and other Democrats who wanted the party to unite behind his onetime rival, Hillary Clinton. “Misinformation miscreants will have a field day with this.”

Ill will between Sanders and Warren supporters is now exploding on social media, with angry memes, conspiracy theories and harassing commentary mostly aimed at Ms. Warren. Negative attacks and doubts about party unity are exactly what Democratic leaders do not want to happen in 2020, for fear of handing ammunition to Mr. Trump, as the heated contest between the Vermont senator and Mrs. Clinton did four years ago.

Many Warren advisers and allies think the Sanders camp has long tolerated public attacks on her from his surrogates, and believe he is not reining in divisive and in some cases sexist attacks against her among Sanders supporters on Twitter.

And the Sanders camp is even more frustrated over what they see as an orchestrated, dayslong campaign by Ms. Warren to revive her bid by suggesting Mr. Sanders is a misogynist.

Sanders advisers believe Ms. Warren has hurt herself with the accusations but also put them in a no-win situation, in which they are unable to fully strike back for fear of appearing insensitive but risk incurring damage of their own without rebutting her claims.

Ms. Warren’s decisions at Tuesday’s debate to openly challenge Mr. Sanders’s denial of that remark, and then to confront him after the debate and refuse to shake his hand before the cameras, have also led Sanders supporters to believe that she is acting underhandedly.

On Thursday, a handful of progressive groups, distraught over the tensions between the two leading liberal candidates, scrambled to tamp down the tensions, issuing a statement urging the two senators to halt their “crossfire” lest a moderate benefit from the hostilities.

But even if one of them claims the nomination, the rupture between the two senators could be difficult to repair because of the nature of their two coalitions: If Mr. Sanders emerges as the nominee, he may find it difficult to energize the female Democrats who were already uneasy with him because of the 2016 race. And should Ms. Warren become the party’s standard-bearer, she could find it hard to win back the most fervent Sanders backers, who hardly needed any further evidence to claim that the nominating process is stacked against him.

Mr. Sanders’s closest adviser, Jeff Weaver, described the two candidates as “senatorial friends, as that term is understood in Washington,” and portrayed their recent squabble as a blip. “It’s not the height of their relationship, but I’m sure it will be fine,” Mr. Weaver said.

Describing what Mr. Sanders had told him about the 2018 conversation, Mr. Weaver said they discussed the “challenges of women running in the era of Trump.” And he said it was Ms. Warren who broached the subject of whether a woman could run against Mr. Trump when the two met in private in December 2018.

“She brought it up,” Mr. Weaver said.

Yet this week’s report about that gathering, and Ms. Warren’s assertion that Mr. Sanders had indeed told her a woman couldn’t win, was only the match that sparked a conflagration that had been slowly building.

The confrontation at the debate in Des Moines may have crystallized into a few tense moments on camera, but it had been simmering for more than a year. It can be traced to the weeks after a dinner at Ms. Warren’s condominium in December 2018, when a decade-long alliance between New England progressives with a shared contempt for political artifice first became strained by their mutual ambition.

Ms. Warren and her top advisers believed that Mr. Sanders might not run for president, according to people familiar with the discussions at the time, and that there was at least a chance the then-77-year-old Vermont senator would accept political emeritus status and crown Ms. Warren as the new leader of the left.

At the same time, Mr. Sanders’s supporters viewed Ms. Warren as politically damaged, perhaps beyond repair, by her decision to take a DNA test to prove her Native American ancestry.

Yet both of those assumptions, which could have doubled as hopes, turned out to be misguided. By the end of 2019, it was clear that these two liberals were both blocking the other from consolidating the left in the Democratic primary — and that their fragile peace could not last long.

“This was their frustration boiling over,” said former Representative Barney Frank of Massachusetts, who has known both senators for years. “She’s frustrated by his rigidity and being attacked by his people for her effort to make what they both agree on politically more sellable. And he’s understandably resentful that she comes along and becomes the darling of some on the left for advocating ideas he’s been advocating since long before her.”

Now, after months of Mr. Sanders instructing his aides not to be critical of Ms. Warren and Ms. Warren steadfastly refusing to utter anything negative about Mr. Sanders, the two are feeling upset and betrayed, allies said.

A handful of progressive groups — some supporting Mr. Sanders, some Ms. Warren and others neutral — expressed their anxiety in an unusual joint statement Thursday that reflected the degree of alarm on the left.

“Sanders and Warren, as well as their campaigns and supporters, will need to find ways to cooperate,” wrote the leaders of eight liberal-leaning organizations. “The crossfire amplified by the media is unhelpful and does not reflect the relationship between two Senate colleagues who broadly worked well together for most of the last year.”

In fact, their working relationship dates to well before 2019.
The two bonded when Ms. Warren, then a Harvard law professor and bankruptcy expert, came to Vermont for a town hall event in 2008 with Mr. Sanders, who two years earlier had been elected to the Senate. He called her “one of the most knowledgeable and articulate writers in America in terms of what is going on in the middle class.”

In 2012 it was Mr. Sanders’s turn to cross the state line, and he stumped for Ms. Warren’s Senate bid in western Massachusetts.

They never became personally close, but their shared worldview brought them together in a Senate light on populists.

When it became clear after 2016 that both harbored presidential ambitions, Ms. Warren was particularly careful to cultivate Mr. Sanders.

She endorsed Keith Ellison, a top Sanders surrogate who was then a congressman, for Democratic National Committee chair, telling an adviser that she felt she owed it Mr. Sanders, according to a Democrat familiar with the conversation. And before long she was appearing on Mr. Sanders’s podcast and anecdotes were springing up in articles about how they shared meals in airports.

Ms. Warren has also taken Mr. Sanders’s side in his grievance about the 2016 election. In an interview with CNN in November 2017, when she was asked whether she agreed that the primary had been tilted in Mrs. Clinton’s favor, Ms. Warren replied “yes.”

But tensions between the two have slowly grown since they entered the White House race, as they both pursue progressive voters and endorsements from left-wing leaders and groups.

It was not until Ms. Warren stopped saying “I’m with Bernie” on “Medicare for all” and devised her own plan that their relationship began to sour. Ms. Warren laid out a transition to a single-payer system, while Mr. Sanders repeatedly said he would do it “in my first week of office.”

”She tries to be a little flexible, says she wouldn’t do it until her third year, and she gets attacked by him,” said Mr. Frank, who has not endorsed but is friends with Ms. Warren.

Now, after a head-spinning week, it’s clear both campaigns would like to move on.

Responding to a reporter who tweeted about trying unsuccessfully to get Mr. Sanders to comment on the postdebate argument, a Sanders adviser, David Sirota, sought to stoke a different story line.

”I have a crazy idea: perhaps you should ask him about Joe Biden’s 40 year crusade to cut Social Security and Bernie’s own efforts to protect Social Security,” Mr. Sirota wrote.

A Racing Pigeon Traveled From the U.S. to Australia—So Now It Must Die

News DSMW - January 15, 2021
0
For about one in 13 children in the U.S., normally harmless foodstuffs such as milk, eggs and peanuts can send the body's natural defenses into overdrive. ...

News DSMW - January 15, 2021
0
The coronavirus pandemic will shorten the life expectancy at birth for Americans by about a year due to the more than 336,000 deaths from the illness in the US in 2020, according to new research. ...