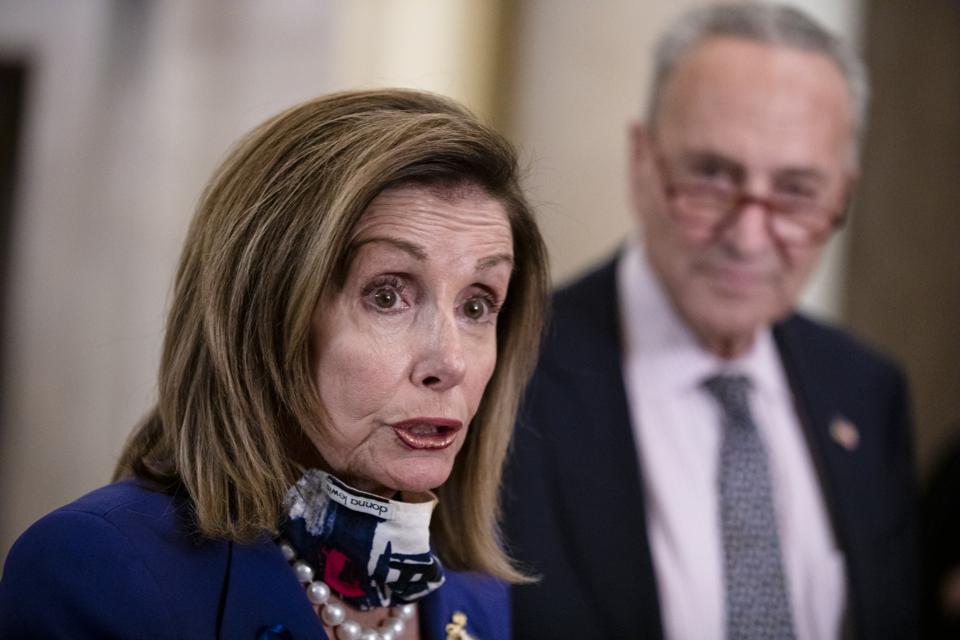 A second stimulus check is the victim of continued stalled stimulus package negotiations over … [+] extending the $600 federal unemployment benefit.

Tense negotiations between White House officials and Democratic leaders today over the next coronavirus stimulus package appear to have stalled again. White House chief of staff Mark Meadows and Treasury Secretary Steve Mnuchin left House Speaker Nancy Pelosi’s office after another marathon meeting without any agreement. “Unfortunately we did not make any progress,” Mnuchin told reporters. Senate Minority Leader, Chuck Schumer, who was also part of the meeting echoed Mnuchin’s sentiments saying “it was a disappointing meeting.”

Both sides have made overtures in the past few days. White House officials have entertained a higher unemployment benefit than Senate Republicans had originally proposed and also appeared to drop their red-line around a business liability shield. Democrats recently offered to reduce their overall package demands by $1 trillion if Republicans would increase their plan by a commensurate amount. None of these concessions have gained enough traction to reach an agreement.

Two Barriers To An Agreement

The two barriers to reaching an agreement on the next coronavirus relief package related to state and local aid and how to extend the federal unemployment benefits that have been a financial lifeline for millions of Americans. “If we can reach an agreement on state and local and unemployment, we can reach an overall deal. And if we can’t, we won’t,” Mnuchin said this afternoon.

Democrats have lobbied for $915 billion to help states and local governments whose budgets have been hollowed by a declining tax base, but Republicans have only offered $150 billion. Similarly, Democrats are insisting on a full $600 per week extension of the federal unemployment benefit, which Republicans are balking at.

With talks at a standstill, Mnuchin and Meadows have said they will officially recommend that President Trump sign executive orders on unemployment insurance, evictions, and student loans. “The chief and I will recommend to the president based upon our lack of activity today to move forward with some executive orders,” Mnuchin said. It’s unclear exactly how Trump’s executive actions will play out, including “to what degree Trump could move on his own to restore emergency unemployment benefits that were authorized by Congress in March and then expired at the end of July,” as The Washington Post noted.

However, one thing is clear. None of the executive orders that the White House has hinted at executing involve a second stimulus check, which may only be approved and disbursed with passage of legislation by Congress and a signature from Trump. Despite Democrats, Republicans and White House officials in agreement about the need for a second direct payment to Americans, a second stimulus check appears to be the victim of stalled negotiations over other aspects of aid.

While executive orders may be used to provide some relief to the close to 30 million Americans who are unemployed and those who may be facing evictions, it won’t move the needle on a second stimulus check. For that, Congress and the White House will need to reach an overarching agreement, which is looking more and more doubtful.

Second Stimulus Check And $600 Benefit Extension May Be Delayed; Here’s Why That Might Be A Good Thing