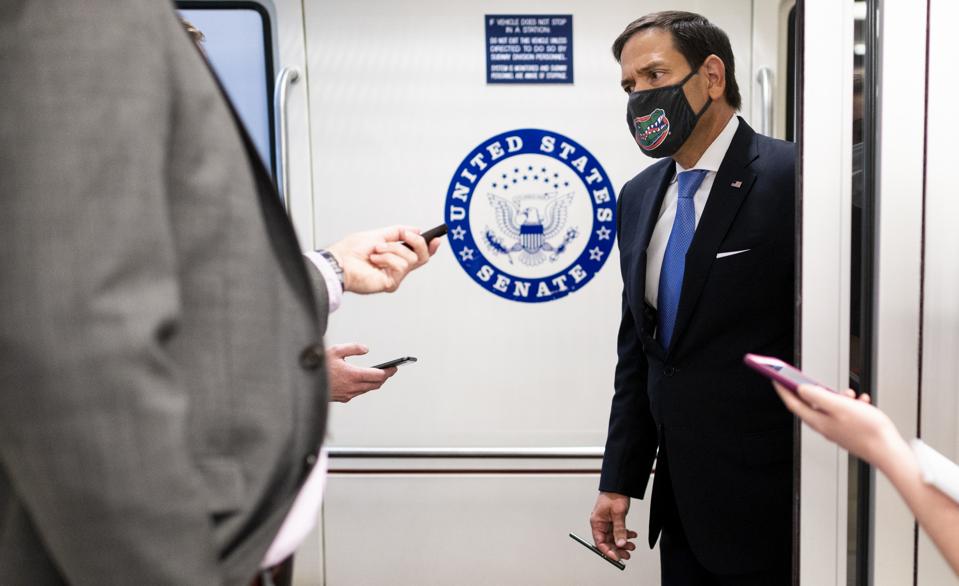 UNITED STATES – JULY 22: Sen. Marco Rubio, R-Fla., speaks to reporters in the Senate subway as he … [+] leaves the Capitol after a vote on Wednesday, July 22, 2020. (Photo By Bill Clark/CQ-Roll Call, Inc via Getty Images)

The Senate gave us a peek at its long-awaited Health, Economic Assistance, Liability Protection, and Schools Act (HEALS) proposal last night, and as before there are a lot of moving parts. Small business owners can celebrate the renewal of the Paycheck Protection Program Act and the new potential for Second Draw Loans for businesses that have already received funding. However, another new loan proposal that went largely unnoticed may actually have more impact. Changes to the Loan Guaranty Program for recovery sector business concerns proposed by Senator Marco Rubio of Florida has the potential to help sustain small businesses for years to come.

Section 112 of Rubio’s bill makes changes to the 7(a) Loan Guaranty program for Recovery Sector Business Concerns. The Small Business Administration (SBA) administers several programs to support small businesses, including the loan guaranty programs designed to encourage lenders to provide loans to small businesses “that might not otherwise obtain financing on reasonable terms and conditions.” According to the Congressional Research Service, the SBA’s 7(a) loan guaranty program is considered the agency’s flagship loan program.

This new proposal improves the terms of 7(a) loans for seasonal businesses and businesses located in small business low-income census tracts. The loan terms allow borrowers to receive a loan of up to two times annual revenues, up to $10 million, for up to 20 years at an interest rate of one %. This is significantly more money than the PPP Second Draw Loans mentioned earlier in the bill that are capped at 2.5 times average total monthly payroll costs in the one year prior to the loan, up to $2 million. Additionally, it’s more money than the Economic Injury Disaster Loans (EIDLs) that were capped at $150,000 at 3.75% interest rate with a maturity rate of 30 years.

To be eligible for a loan the business must:

Loan amounts are much larger, but that’s not all these loans offer:

Why this is important

While PPP was necessary and needed for small-business recovery, it was never intended as a permanent solution. In addition, it left out a lot of businesses that needed significant help. “Short-termism made sense back in March,” said John Lettieri, President and CEO of the Economic Innovation Group (EIG). “It makes less sense now and Rubio’s proposal acknowledges that reality.”

The reality is we are four months into a pandemic that shows no signs of ending. A vaccine may be months or years away; full economic recovery could take even longer. Businesses will be operating at reduced capacity until that happens. “If we’re not augmenting businesses for long-term disruption, we are just pushing back the time until the fall of the cliff,” Lettieri said. Small business failing will be disastrous for the over economy.

According to the National Bureau of Economic Research (NBER) from February to April, the number of active business owners in the United States plummeted by 3.3 million or 22%. This is the largest drop in business owners on record, with losses “felt across nearly all industries and even for incorporated businesses.” The news was especially dire for Black businesses which were down 41%. At the same time, about a third (32%) of Latinx business owners closed their doors and Asian business ownership dropped by 26 %. There was a rebound of 7% in each May and June; however, business owners of color are still disproportionally underrepresented in the rebound.

Despite what seems like a good starting point, this proposal still needs some work to address all of the issues that have been unaddressed by PPP. “We need a menu option given how diverse the small business sector is,” said Lettieri. That menu will include multiple programs like PPP, EIDLs and this expanded recovery loan.

State funding may also be on the menu. U.S. Senators Bob Menendez (D-N.J.), Bill Cassidy, M.D. (R-La.) Joe Manchin (D-W.Va.), Cindy Hyde-Smith (R-Miss.), Cory Booker (D-N.J.) and Susan Collins (R-Maine) introduced bipartisan legislation to deliver critical, federal resources to states and communities on the frontlines of the COVID-19 fight. The State and Municipal Assistance for Recovery and Transition (SMART) Act targets $500 billion in emergency funding to every state, county and community in the country, while prioritizing assistance to the areas with the greatest need.“ Our state and local governments are on the front lines of this crisis,” Sen. Booker said in a press release. This funding would allow them to also deploy resources to people that may need them most but aren’t getting funded through tradition routes, especially the unbanked.

Additionally, community banks will need to be at the forefront of this lending proposal. “As the Senate debates the next stimulus package, lawmakers should heed the recommendations of the nation’s community banks, which account for more than two-thirds of Paycheck Protection Program loans to small businesses,” said Independent Community Bankers of America (IBCA) President and CEO Rebeca Romero Rainey. “In the face of ongoing economic challenges, community banks are calling on Congress to advance specific policies that will have a meaningful impact on small businesses and jobs in local communities across America.”

According to SBA’s data Community banks delivered the most PPP loans to:

Additionally, community banks served 98.2 % of low-income or economically distressed counties, 96.6 % of rural counties and 92.4 % of urban counties. They also processed PPP loans five to 10 days faster than other lenders.

Lastly, Lettieri also suggested funding education and resource organizations in need understand the options available to them. Organizations like Civitas Strategies, a management consultancy firm for mission-driven organizations in Lynnfield, Massachusetts, helps those in vulnerable communities get funding.

“Businesses in marginalized communities having faced decades of racism and under-funding don’t have the infrastructure to prepare a great Profit and Loss report or other documents that would be needed to show the revenue test and prove income,” said Gary Romano, President and CEO of Civitas Strategies. “So if this does go forward, we need to understand how it can be done by one person who doesn’t have anything beyond their 2019 taxes and a paper and pen accounting system.” Romano would also love to see a grant proponent to the stimulus for those in struggling communities.

“More options are better, as long as they are complimentary not duplicative,” said Lettieri. “We are in unprecedented times and the relief options should look unprecedented.”

These days, we’re hearing a lot about Covid-19 “long-haulers” whose recovery from the virus takes weeks or months or who never get back to normal. The Loan Guaranty program is encouraging because it targets small business “long-haulers,” companies that can’t bounce back right away and that will need sustained help to get back to full strength.