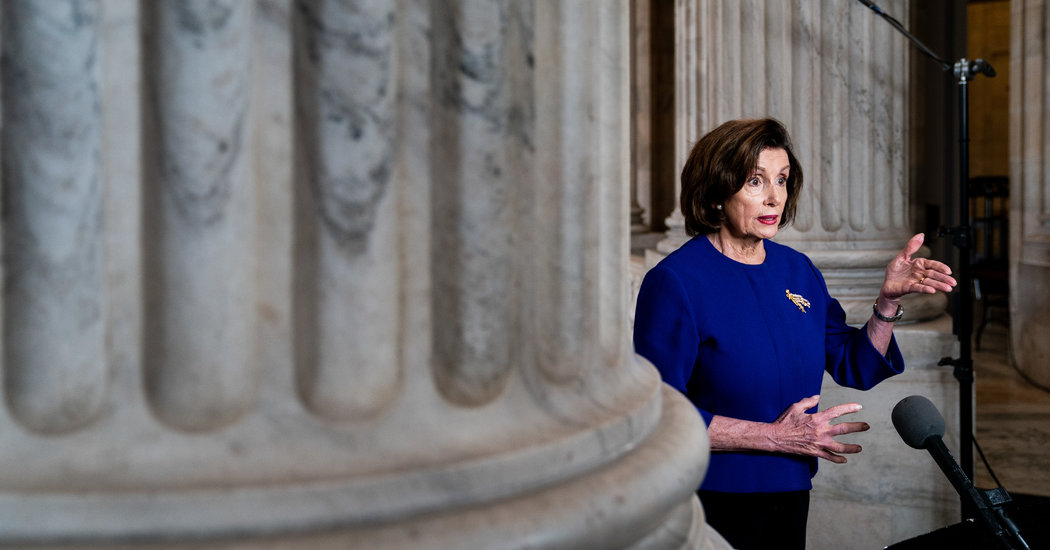 WASHINGTON — A new debate broke out on Wednesday over the next infusion of federal dollars needed to bolster an economy battered by the coronavirus pandemic, as Democrats pressed to add money for hospitals and state and local governments to an emergency infusion of $250 billion requested by the Trump administration to help distressed small businesses.

The counterproposal, put forward by Speaker Nancy Pelosi of California and Senator Chuck Schumer of New York, the minority leader, threatened to slow down the additional round of funds for a new loan program created by the $2 trillion stimulus package for small businesses, which the administration and Republicans had hoped to speed through Congress by the end of the week.

“The bill that they put forth will not get unanimous support in the House,” Ms. Pelosi said in an interview with National Public Radio on Wednesday. “It just won’t.”

The debate is over an interim measure that lawmakers in both parties agree is necessary to reinforce the small-business loan program — which had a troubled rollout and has been inundated with requests from desperate companies — before Congress turns to a more sweeping bill it has begun referring to as “Phase Four” of the coronavirus aid efforts. But even the smaller, more immediate measure has created some friction.

In a joint statement on Wednesday, the Democratic leaders said they supported the administration’s request for an additional $250 billion for the loan program. But they said $125 billion of that should be directed to underserved businesses that might otherwise have trouble securing loans, including those that are owned by women, people of color and veterans, or situated in rural areas.

Ms. Pelosi and Mr. Schumer also said they would push to add $100 billion for hospitals, community health centers and health systems — in part to shore up testing and the distribution of critical safety gear for health workers — as well as $150 billion for state and local governments and a 15 percent increase in food assistance benefits.

In the statement, the two leaders referred to the measure as “interim emergency legislation” and said that after passing it Congress should move to consider another economic relief package to “provide transformational relief as the American people weather this assault on their lives and livelihoods.”

Republicans had hoped to begin approving the quick injection of funds as early as Thursday during a procedural session in the Senate without the entire chamber present, with the House sending it to the president’s desk in a similar maneuver on Friday. The plan would allow Congress to quickly clear the bill even though both chambers are in recess until April 20, with lawmakers scattered around the country and not present in Washington to vote. But that technique works only if every member consents and under congressional rules, a single lawmaker can block the move.

Senator Mitch McConnell of Kentucky, the majority leader, said on Wednesday evening that he would move forward with a procedural maneuver that would approve just the request from the administration. “There is no realistic chance that another sprawling bill which allocates half a trillion dollars to a number of priorities, even important ones,” would be able to pass by the end of the week, he said.

“I hope none of my colleagues object to my request for these urgently-needed funds,” Mr. McConnell said on Twitter. “There is no reason why this bipartisan job-saving program should be held hostage for other priorities. Let’s re-fund the only program that’s already running dry and keep moving forward together.”

It remained unclear on Wednesday whether Senate Democrats would block the procedural move on Thursday, but a senior Senate Democratic aide said they would present an alternative to Mr. McConnell’s motion. A spokesman for Mr. Schumer said Democrats hoped that Republicans would agree to their proposal for a “Small Business Plus” relief plan, suggesting that Democrats may try to counter Republicans’ attempt to win adoption of the $250 billion by bringing up their own.

Even if consensus can be reached in the Senate, it was unclear whether the emergency aid could be quickly cleared in the House. Representative Thomas Massie, Republican of Kentucky, who sought last month to block attempts by House leaders to bypass a vote and unanimously approve the $2 trillion stimulus measure without most members present, is threatening to stand in the way again.

“That’s not going to fly,” he said on Fox Business. “That doesn’t fly with the Constitution.”

The administration and Republicans have signaled that they are reluctant to expand upon their request to bolster the small-business loan program, known as the Paycheck Protection Program, instead preferring to delay negotiating funds for additional provisions for a larger legislative package in the coming weeks.

Senator Marco Rubio, Republican of Florida and a chief proponent of the program, said that while the request from Democrats was “not without merit,” he would like to consider the issues separately, “simply because I think it will slow down urgently needed funds.”

Mr. Schumer spoke to Treasury Secretary Steven Mnuchin about the Democratic proposal on Wednesday, according to his spokesman. Ms. Pelosi said on NPR that Republicans were opposed to it.

“The White House says they don’t support that, but we do,” she said.

Congress initially allocated $349 billion to the program, which is intended both to help small businesses and to encourage them to continue paying and employing their workers. Under its terms, the loans provided are to be forgiven for businesses that maintain their staffing levels and use the money to cover the cost of their payrolls. Mr. Mnuchin has repeatedly called on Congress to approve the request, which was formally sent to Capitol Hill as $251 billion on Tuesday evening.

“I want to assure all small businesses out there we will not run out of money,” Mr. Mnuchin said Wednesday on CNBC, adding that President Trump asked him to return to Congress with the request. “We hope they pass this tomorrow and Friday, and we want to assure everybody if you don’t get a loan this week you’ll get a loan next week or the following week. The money will be there.”

He did not address the demands raised by Democrats. Ms. Pelosi said she hoped an agreement could be reached with the administration.

Since it began Friday, the Paycheck Protection Program has had an exceedingly rocky start. It has stretched the limits of the Small Business Administration, the federal agency in charge of coordinating the loans. Small-business owners, bankers and other participants have voiced concerns that very little of the billions disbursed have actually reached companies in need of the money, and lawmakers are feverishly working to remedy the initial glitches.

But the rush to replenish it, lawmakers said, served as an indication of just how many small businesses wanted to take advantage of the program. Mr. Mnuchin told Democratic lawmakers on a conference call on Wednesday that the program had approved more than $98 billion in loans to more than 3,600 different lenders, according to an official familiar with the call, and the Treasury Department issued additional guidelines on Wednesday to help ease the application process.

He also told lawmakers that the first round of direct cash payments to American families were set to begin next week, according to the official.

Even the perception that there might not be enough money to distribute to the thousands of businesses seeking aid could cripple companies, as a typical small business cannot survive less than a month without incoming revenue, according to research by the JPMorgan Chase Institute.

“It’s imperative that we act quickly,” Senator Susan Collins, Republican of Maine, said on Wednesday, adding that the program “is most at risk for being depleted and running out of money.”

The current debate is a prelude to what promises to be a much larger and more complicated negotiation over the fourth phase of government help. In a private caucus call, Ms. Pelosi told House Democrats that she hoped to include assistance for tenants and landlords in that measure, as well as at least $2 billion in election funding, according to an official familiar with the private discussion who insisted on anonymity to describe it.

In a separate call, Democrats pressed Vice President Mike Pence and members of the White House coronavirus task force on the administration’s response to the pandemic. Lawmakers asked about the availability of equipment and protections for front-line workers, and how the funds already approved by Congress would be distributed, according to four officials familiar with the call but not authorized to disclose the details publicly.