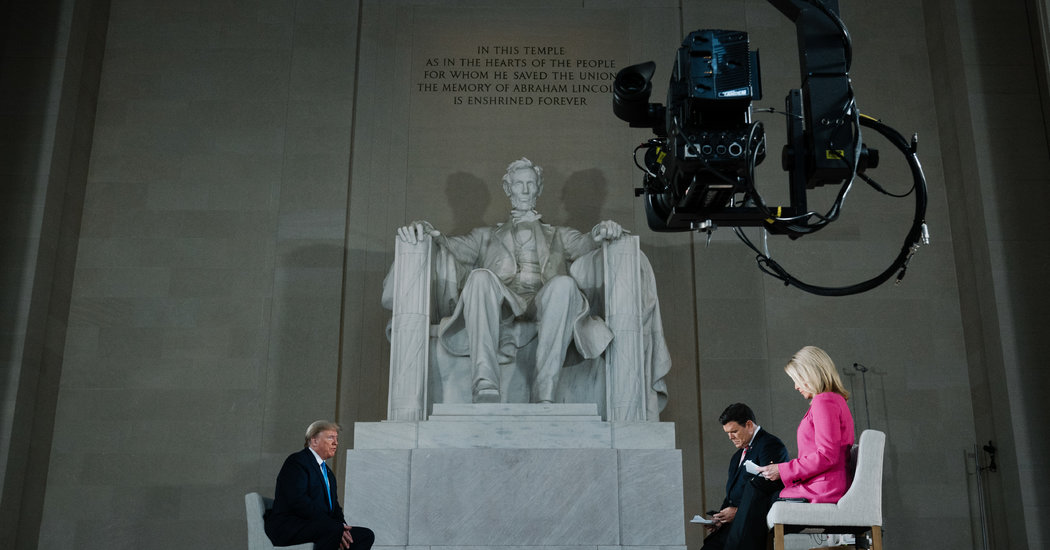 Abraham Lincoln may have died 155 years ago, but everyone still wants his endorsement.

He is the star of a new campaign ad for Joseph R. Biden Jr., the presumptive Democratic nominee, that juxtaposes classic Lincoln phrases (“a house divided against itself cannot stand”) with clips of a peevish President Trump doing things like directing his vice president to ignore governors of virus-ravaged states “if they don’t treat you right.”

He is the namesake for The Lincoln Project, a venture from a group of dismayed Republicans who are seeking to ensure Mr. Trump’s defeat in November. (“We look to Lincoln as our guide and inspiration,” they wrote of their effort.)

And from the other side of the argument, there was Mr. Trump himself earlier this month at the magisterial Lincoln Memorial, that great secular temple to American unity and hope, musing to a Fox News audience about how he sees Lincoln in himself.

“Look, I am greeted with a hostile press the likes of which no president has ever seen,” Mr. Trump said, gesturing to the towering figure looming behind him. “The closest would be that gentleman right up there. They always said Lincoln — nobody got treated worse than Lincoln. I believe I am treated worse.”

Abraham Lincoln does not approve this message. He has not approved of anything for some time.

But if Mr. Trump’s assessment is a matter of debate, especially when you consider what ultimately happened to Lincoln, the president is also not the first politician to promote himself as a Lincoln-esque figure, whatever that means.

“This has been going on since Woodrow Wilson and FDR decided that both Democrats and Republicans could fight for the mantle of Lincoln,” said Harold Holzer, a Lincoln scholar and the director of Roosevelt House Public Policy Institute at Hunter College. “He is the universal totem for presidents.”

In an age where even facts are subject to dispute, the superiority of Lincoln is a near-universal truth, a natural law of the land. Because he was the first Republican president, Republicans have always considered him a party standard-bearer. But in 1929, Franklin D. Roosevelt, then the governor of New York, declared that the time had come for “us Democrats to claim Lincoln as one of our own,” and since then virtually every president, and many would-be presidents, have looked to the 16th president for guidance, inspiration and cover, trying to out-Lincoln their rivals.

“Part of it is that he is considered the greatest president ever,” said the presidential historian Doris Kearns Goodwin, author of “Team of Rivals: The Political Genius of Abraham Lincoln,” speaking to his enduring appeal. “And the thing about Lincoln is that, even during his presidency, he was able to understand all sides of an issue.”

Presidents have expressed their admiration for Lincoln in various ways over the years. Theodore Roosevelt wore to his first inauguration a ring enclosing a lock of Lincoln’s hair. Woodrow Wilson wrote glowingly of Lincoln’s judicious temperament, his search for common ground, his desire to emphasize the “community of interests” between people at odds with each other.

Barack Obama announced his campaign for president on the steps of the Old State Capitol building in Springfield, Ill., where Lincoln delivered his “House Divided” speech, and was sworn in as president using the Lincoln Bible.

Bill Clinton revered Lincoln and quoted him all the time. Ronald Reagan misquoted him at the Republican National Convention in 1992. George H.W. Bush’s official portrait shows him standing in front of “The Peacemakers,” the White House painting of Lincoln and his generals in the waning days of the Civil War.

In recent weeks, Gov. Andrew M. Cuomo of New York has repeatedly invoked Lincoln at his daily coronavirus briefings, suggesting that the former president would appreciate the governor’s pledge to level with his constituents, despite the grim news. “Lincoln, big believer in the American people,” Mr. Cuomo noted this month.

Mr. Cuomo’s father, Mario M. Cuomo, another three-term New York governor, was also a Lincoln fan, producing a book in 2004, with Mr. Holzer’s historical guidance, about his continuing relevance (“Why Lincoln Matters: Today More Than Ever”).

“Lincoln is always available for everyone’s use, and there’s a long history of that,” said David W. Blight, a professor of history at Yale. “Do you want a healer? There’s the healer Lincoln, which is the one Barack Obama appropriated. Or you could have Lincoln who is a military commander in chief, who would do anything to win that war, who would twist civil liberties inside out. There’s also the ambiguous Lincoln, part of what makes him so usable by everyone.”

Though Mr. Trump has long been criticized for having little sense of (or interest in) history, he and his team have at times spoken admiringly of presidents who would not necessarily figure on everyone’s Top 10 list.

He has hung a portrait of Andrew Jackson in the Oval Office, aligning himself with Jacksonian populism and declaring him “an amazing figure” in American history — looking beyond such episodes as the infamously brutal forced relocation of Native Americans.

As Mr. Trump confronted an impeachment trial in January, Vice President Mike Pence wrote in The Wall Street Journal about the “partisan impeachment” of Andrew Johnson, widely considered one of the worst American presidents ever but, in Mr. Pence’s account, a victim of unfair political persecution.

The president conceded “one big difference” between them, then offered two: “No. 1, he may have been guilty. And No. 2, he had tapes all over the place.” Mr. Trump declared himself an innocent and tapeless man.

Many supporters apparently agree with Mr. Trump’s self-analysis that he is “more presidential” than anyone except for “the late, great Abraham Lincoln.” At a White House event in February to promote Mr. Trump’s work with African-Americans, two guests called him the best president since Lincoln. Last year, so did the actor Jon Voight. “Let us stand up for this truth,” he said in a video posted on Twitter, “that President Trump is the greatest president since Abraham Lincoln.”

This is not a universal view. Mr. Blight, the Lincoln scholar, said he watched Mr. Trump at the Fox event at the Lincoln Memorial with increasing despair. The low point came, he said, when Bret Baier from Fox asked the president how he, like Lincoln, could heal a divided nation.

Mr. Trump didn’t hesitate. “We’re winning bigger than we’ve ever won before, Bret,” he said. “And I think that winning, ultimately, is going to bring this country together.” (Then he segued into a verbal assault on the Democrats and the impeachment “hoax.”)

Mr. Blight could not help thinking of Lincoln’s Second Inaugural Address, delivered soon before the end of the Civil War and steeped in melancholy. In the address, Lincoln emphasized unity rather than division and spoke of going forward with “malice toward none” and “charity for all.”

“Lincoln could have stood up and gloated,” Mr. Blight said. “He could have said, ‘Hey, we won this war, look at us, isn’t it amazing.’ But there isn’t a moment of boasting in it.”

Steve Schmidt, a longtime Republican strategist behind the Lincoln Project, said he and his colleagues had chosen the name because Mr. Trump is Mr. Lincoln’s “antithesis.”

Mr. Trump has been, well, unforgiving toward the Republican rebels.

Appraising the Lincoln Project as a team of “LOSERS” in a recent post-midnight tweet, the president insisted that he has an admirer from the beyond:

“Abe Lincoln, Republican, is all smiles!”