South Africa’s most populated province, which includes the cities of Johannesburg and Pretoria, is preparing some 1.5 million gravesites for potential mass burials, its top health official says, as coronavirus cases in the country begin to spike. 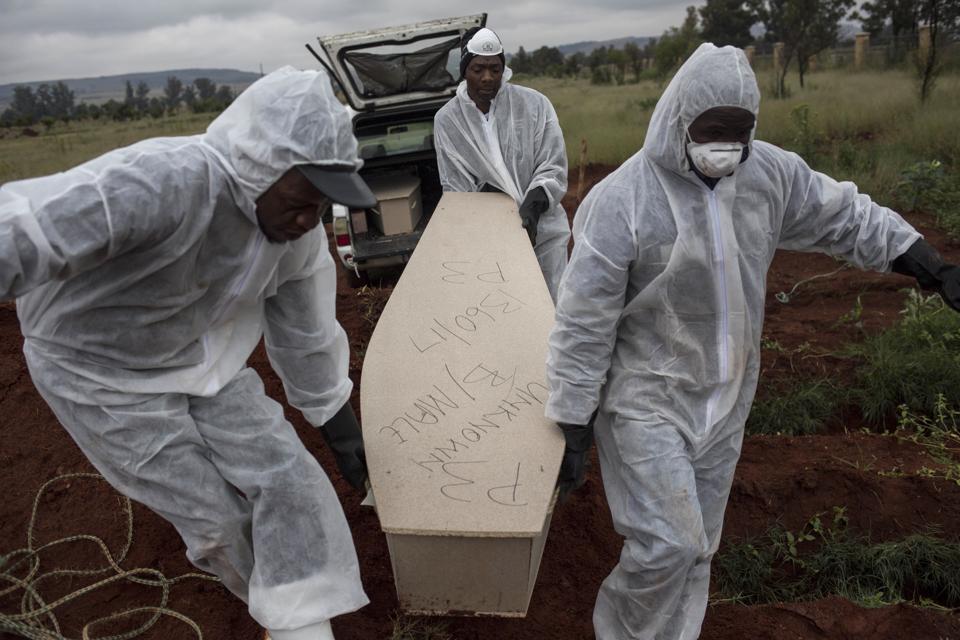 In this Thursday, April 12, 2018 photo, mortuary workers carry the coffin of an unidentified man for … [+] burial at a cemetery outside Johannesburg. At least five bodies of unidentified people are buried on top of each other in each grave. (AP Photo/Bram Janssen)

Dr. Bandile Masuku, the health representative on the Gauteng province executive council, said the graves are being prepared, but he hopes they are not needed.

Coronavirus cases and deaths are on the rise in South Africa, and the country has now reported more coronavirus cases than any other on the African continent, which had largely been spared the severe impact coronavirus has had on the rest of the world so far.

But Masuku said in an interview with the South African Broadcasting Company that a major coronavirus surge is coming.

He expects the current spike will continue to worsen until mid-August, but if additional restrictions are put in place, the severity of the spike could be lessened with its peak pushed back until September.

Even in a worst-case scenario, Masuku said he doesn’t expect to utilize all the graves, which would require 10% of Gauteng’s 15 million-person population to die, but said it’s better that the province is at least prepared for all the space it could possibly need.

Those who are put in the graves will not have individual headstones, Masuku said; instead, there will be one headstone for large numbers of coronavirus victims.

546,318 — That’s how many deaths have been reported worldwide in the pandemic so far, according to Johns Hopkins University—3,502 of which are from South Africa.

Much of Africa has not dealt with a significant coronavirus surge like many populated areas in the rest of the world. But still, South African officials have moved to reopen many aspects of what had been a largely shut down country. South Africa is currently in “Level 3” of its reopening, which it entered into in mid-June, easing some restrictions on restaurants, casinos and movie theaters, among other businesses.

Gauteng plans to have 500 beds ready for a coronavirus hospital opening at the end of next week. Another 500 beds should be added by the end of July, Masuku said.