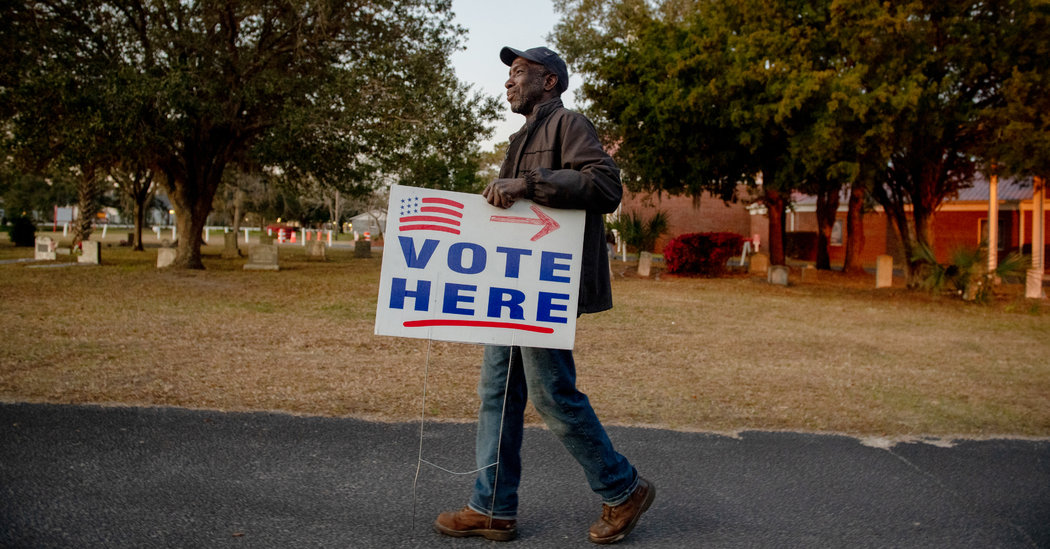 Black voters in South Carolina may not end up uniting behind a single Democratic candidate in Saturday’s primary as they did in 2008 and 2016. Many support Joseph R. Biden Jr., but some like Tom Steyer, Bernie Sanders or other Democrats still in the race. Indeed, this cycle, there are noticeable splits in the black vote along ideological and generational lines.

But, broadly speaking, African-American voters across the state have sought to make one thing clear this week — and it is something on which they tend to agree if even they are not all backing the same candidate: Toss out whatever assumptions you might have about electability based on primary contests in mostly white states; we’ll make up minds for ourselves.

“We’re the base, and we’re yet to express ourselves,” said David Cakley, a church deacon from Goose Creek, S.C, referring to black voters.

Added Mayor Stephen K. Benjamin of Columbia, S.C.: “The South got something to say.”

‘We’re the Base’: Black Democrats in South Carolina Want to Send a Message

As many prepare to rally around Joe Biden in Saturday’s primary, black voters want it known that their views of electability are not shaped by predominantly white states like Iowa.

COLUMBIA, S.C. — Senator Elizabeth Warren of Massachusetts hosted a small rally and canvass kickoff with volunteers Saturday, as the campaign braced for a South Carolina primary where Ms. Warren is not expected to place within the top three.

She offered short remarks that trailed closely to her stump speech, touting her wealth tax proposal and the “big, structural change” it would represent.

“Three years of Donald Trump as president and people are scared,” Ms. Warren said. “Our democracy hangs in the balance. And you, in South Carolina, have a decision to make.”

“Americans are at our best when we see a problem, we call it out for what it is, and then — we fight back,” Ms. Warren said.

The most recent polling has Ms. Warren in fourth place in today’s primary, held down by her single-digit numbers with the black electorate that makes up the majority of South Carolina Democrats.

In a sign the campaign is already looking ahead to Super Tuesday, she is headed to Arkansas and Texas for rallies later in the day, and surrogates have set expectations that those states will go better than South Carolina.

COLUMBIA, S.C. — Voting in Saturday’s primary began with a trickle this morning. Only a handful of people had shown up at polling places about an hour after polls opened at 7 a.m.

“It’s kind of slow,” said Robert Jones, the poll captain at Dreher High School, the polling location for the city’s affluent Ward 16, where only 19 people out of the ward’s 600 active Democrats had cast their ballots by 8 a.m.

One of them was Michael Moore, a retired iron worker. “I voted for Steyer,” Mr. Moore said as he was leaving the polling place.

Mr. Moore, 68, said he was worried that several of the other candidates were too old to be president, and that was one of the reasons he chose Mr. Steyer, 62, a former hedge fund manager. “He just seems to have an energy about him that comes across,” Mr. Moore said.

Also leaving the polling site were Mark and Gina Marriner, a married couple who said they had wanted to vote for Mr. Steyer but chose former Vice President Joseph R. Biden Jr. in the end.

“We didn’t think Steyer had a chance in the long run,” said Ms. Marriner, an antique art dealer. “We preferred Steyer but felt that Biden was the best chance to beat Trump.”

About a mile away at a Masonic Temple, voters in Ward 9 were also sleeping in, according to Benjamin Tyler, the captain.

“It’s going to be kind of slow,” Mr. Tyler said. “A lot of people are voting absentee.”

Mr. Tyler, a retired firefighter who runs a landscaping company, said he became a poll captain after first working as a poll watcher.

“I fell in love with the process,” Mr. Tyler said. “I wanted to be a part of something in the community.”

“Some of the stuff he says is so bizarre that you can laugh at it,” he said. “When you say things like that it just so diminishes the, the faith that people around the world have in the United States. The president of the United States said it’s a hoax? That’s hard to beli— even for him it’s hard to believe. I mean it’s just bizarre. Absolutely bizarre.”

Mr. Biden’s remarks came as he prepared to greet voters here early on the morning of the South Carolina primary.

Asked later whether the president could still be trusted, he replied, “I know he’s a stable genius, but it’s, it’s ridiculous the things he’s saying.”

DJ Jazzy Jeff, the Philadelphia-born hip-hop artist who once played Will Smith’s best friend on “The Fresh Prince of Bel Air,” took the stage, as did the gospel star Yolanda Adams, the rapper Juvenile, and Mr. Steyer himself:

Before singing “America, The Beautiful,” Ms. Adams urged the crowd to vote. “This is one of those elections and primaries that make a difference. Because what’s going on in our country is not good. They’ve got us scared with this coronavirus. They’ve got us scared with a lot of things. But you can’t walk in fear. Because if you walk in fear, you’re paralyzed,” she said.

State Senator John Scott, speaking on behalf of Mr. Steyer before his arrival, urged the 200 or so attendees — many of them Allen University students — to turn out to the polls on Saturday. “I want you to remember this: It’s in your hands. For those of you who have not voted, you need to please consider Tom, because Tom is the real deal.”

Mr. Scott emphasized Mr. Steyer’s call to fund historically black colleges with $125 billion over 10 years, more than any other candidate has proposed.

Tadejah Petty, 23, of Gaffney, S.C., said she planned to vote for Mr. Steyer in Saturday’s primary. “He seems very legit talking about what he wants to do for America,” Ms. Petty said.

The music was the big draw for some students, who said they could not vote in the South Carolina primary. “I’m a music major,” said Jamari Pratt of Camden, N.J., 19, who said he had been lured to the event by the entertainers and had never heard of Mr. Steyer.

The Democratic Party’s most faithful constituency is expected to account for over half the electorate in South Carolina on Saturday and their votes could prove pivotal to the direction of this turbulent race.

If black voters rally behind Joseph R. Biden Jr., the former vice president, it could resurrect his campaign and reshape the direction of a primary that appeared to be moving in Senator Bernie Sanders’s direction following his success in the first three states.

Increasingly, the question in South Carolina, among Biden supporters and foes alike, is not whether he wins but the size of his margin. Public polls show him leading by double digits, as the billionaire Tom Steyer’s support appears to be slipping despite his avalanche of spending in the state.

The margin is especially important, because it will indicate the depth of Mr. Biden’s support among black voters. And that could offer some insights about how strong he will be when 14 more states, many of them also in the South, vote on Super Tuesday.

That margin is also significant because it will indicate how much progress Mr. Sanders has made with African-Americans since he struggled to win their support, particularly in the South, in his 2016 bid.

Further, a larger victory will also hand Mr. Biden a better case for why moderate Democrats should abandon their flirtation with Michael R. Bloomberg, who did not compete in the early states.

Unlike the first three states, which got the vast majority of the field’s attention in the days leading up to those contests, Mr. Biden’s advantage lured some of the other candidates to Super Tuesday states.

But Saturday will also offer some insights as to which of the candidates who have struggled with non-white voters — Pete Buttigieg and Senators Amy Klobuchar and Elizabeth Warren — can make at least some inroads with African-Americans.

Read this story in the app