The race between Christy Smith, a Democrat and longtime elected official, and her Republican opponent, Mike Garcia, a former pilot and current defense contractor, has become increasingly nasty as they have battled on the airwaves while confined to their homes.

Wisconsin’s special election to fill the House seat vacated last year by Mr. Duffy, a Republican, is not expected to be close, but is being viewed by both parties as an important indicator of enthusiasm. Like Wisconsin’s contentious April 7 elections, the voting in the district, which covers parts of 26 counties in the state’s north, will be conducted both by mail and in person, with National Guard troops deployed to help operate some of the polling locations.

The National Guard has also been activated in Nebraska, which is holding its primary elections in the already-decided Democratic presidential contest as well as in local races.

Here’s what to watch for on Tuesday:

In the race to replace Ms. Hill, who resigned after admitting to an affair with a campaign staff member, the biggest question is turnout.

Every registered voter in the district received a ballot in the mail. All they have to do is place that ballot back in their mailbox — the postage is already paid for by the state.

But that is hardly a given, and early returns showed that Republicans are sending their ballots back at a significantly higher rate than Democrats. As of Monday, 40 percent of registered Republicans had mailed in their ballots, according to tracking data, compared with 27 percent of Democrats, who have about 30,000 more registered voters in the district.

During the 2018 midterm elections, liberal activists from Los Angeles flocked to the district to knock on doors, particularly focusing on independent and occasional voters — the sort of people who tend to sit out most midterm contests. Now, the question is: Will those voters participate this time?

And there is a significant gap in returns based on age and ethnicity: 51 percent of voters older than 65 have mailed in ballots, while just 15 percent of voters younger than 35 have done so. Roughly one-third of white voters have returned ballots, compared with 17 percent of Latinos, according to tracking data.

Those numbers have many Republicans optimistic that they may be able to pry back a California congressional seat from Democrats for the first time since 1998. But President Trump does not appear to be so optimistic; after backing Mr. Garcia last month, the president weighed in again this weekend, calling the election “rigged.”

In several misleading tweets, the president attacked the decision to add an in-person voting center in Lancaster, a city in the northern suburbs of Los Angeles County.

Mr. Trump wrote in a tweet: “So in California, the Democrats, who fought like crazy to get all mail-in only ballots, and succeeded, have just opened a voting booth in the most Democrat area in the state. They are trying to steal another election. It’s all rigged out there. These votes must not count. Scam!”

Lancaster is represented by two Republicans in the State Legislature and has long been governed by a Republican mayor, R. Rex Parris, who is a vocal supporter of Mr. Trump and has supported the move to open another voting center in the area, which is predominantly African-American. The center is one of 13 in-person polling places open on Tuesday, and will also allow for same-day voter registration.

Mr. Garcia echoed the president’s attacks, saying Ms. Smith and “her liberal Dem allies” are “desperate and trying to change the rules to steal an election,” adding, “We can’t let them succeed!!”

Mr. Garcia has repeatedly declined to be interviewed by national and local news media. 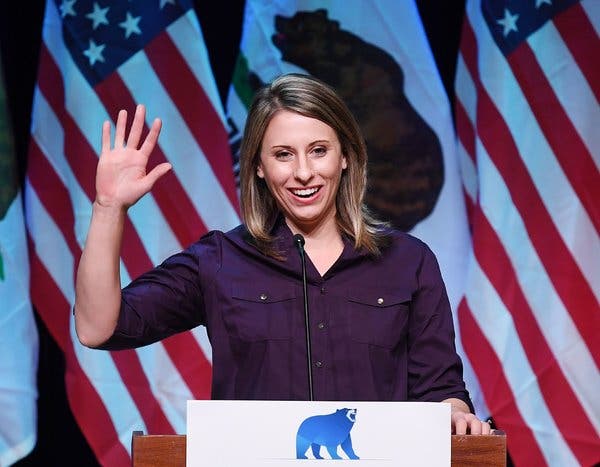 The margin of victory matters in California

In 2018, Ms. Hill won the district by a nine-point margin. All signs point to a narrower margin on Tuesday. And no matter what happens, the two candidates will go on to a rematch in November. Democrats have played down expectations for the special election, but argue that they will fare better in the fall, when more voters are motivated to show up for the presidential election.

If Mr. Garcia emerges the winner, expect Republicans to seize on the victory as evidence that they can win in suburban swing districts and as a way to energize their base.

But the district’s changes have been clear for years, as the electorate has become younger and more diverse. Now, nearly half of all voters in the district are black, Latino or Asian. In 2016, the district backed Hillary Clinton, the Democratic presidential nominee, over Mr. Trump by seven points — and a Republican win would most likely prompt hand wringing among Democrats, who are counting on suburban voters to take back the White House.

In California, Republicans have consistently lost ground to Democrats in the past several years — the G.O.P. holds just seven of the state’s 53 congressional seats.

If the Republican wins in Wisconsin, is that a win for Trump?

Tom Tiffany, a Republican state senator from Hazelhurst, Wis., is widely expected to beat Tricia Zunker, a Democrat from Wausau, Wis., and a school board official, in the special election for Wisconsin’s Seventh District congressional seat. But the margin between them will be instructive for what the state may look like in November’s presidential election in this battleground state.

Mr. Trump carried the district by 20 points in 2016; Mr. Duffy, the former representative, won re-election in 2018 by 22 points. He resigned last year to help care for a baby born with health complications.

Mr. Tiffany has campaigned as an ally of Mr. Trump’s and has not made any mistakes that have made Republicans nervous about his ability to hold what has become a deeply conservative part of the state. But if there’s any question about whether he’s the winner as votes are counted, it will say a lot about where Wisconsin stands in the presidential contest to come this fall.

The Democratic presidential primary is over, but there is still a fight in Omaha between the party’s centrist and liberal wings.

Kara Eastman, a nonprofit executive who lost the 2018 race to Representative Don Bacon, a Republican, is running again in Nebraska’s Second Congressional District, which includes the state’s biggest city and its suburbs. She faces a Democratic primary against Ann Ashford, the wife of former Representative Brad Ashford, whom Ms. Eastman beat in the 2018 Democratic primary.

Ms. Eastman is no longer the surprise upstart she was two years ago. She’s raised more than twice as much money as Ms. Ashford has, and has more TV ads running in the primary’s final weeks. Endorsed by Senator Elizabeth Warren of Massachusetts and liberal groups like Justice Democrats, she has staked out the role as the progressive candidate in the race.