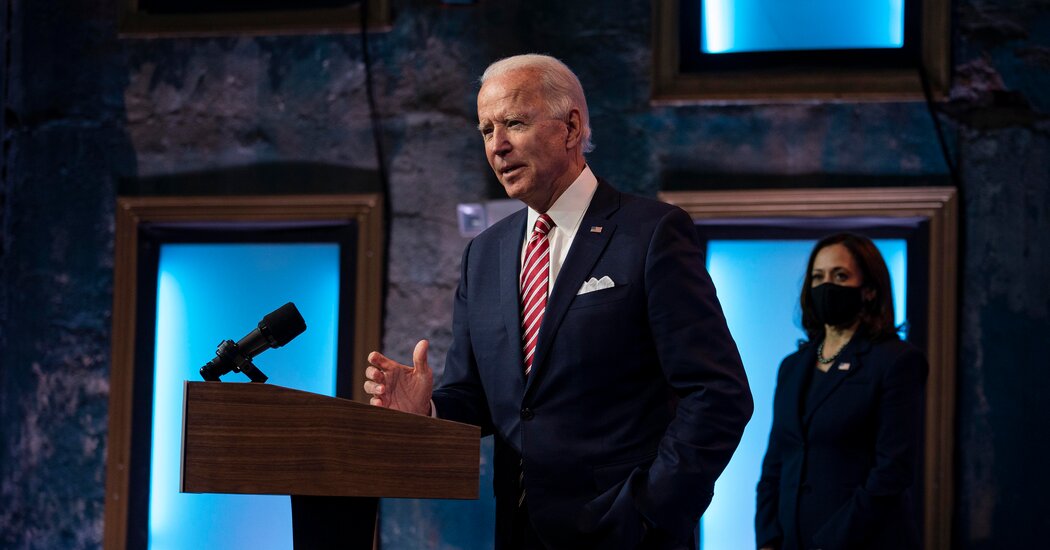 WASHINGTON — Joseph R. Biden Jr.’s campaign was foundering before the first votes of 2020 had been cast, so Steve Ricchetti, Mr. Biden’s adviser and longtime friend, summoned a group of Democrats who felt swept aside by what then seemed the party’s populist wave — the big donors.

“Look, I’ve been living with Biden for eight years. People like and respect him; that’s why he is ultimately going to win,” Mr. Ricchetti, a chipper former lobbyist, told 50 Democratic donors last January at Evercore, a Manhattan investment banking firm, according to a person in the room.

That intervention was a critical moment in Mr. Biden’s then-struggling campaign: The $1.2 million raised that day was needed to bankroll the candidate’s travel, and it kept Mr. Biden in the fight long enough to overcome his early stumbles and win the Democratic nomination.

Mr. Ricchetti, 63, has been a key player in Mr. Biden’s life since joining the vice president’s staff in 2012, but his dogged efforts on behalf of a candidate many viewed as past his prime ensured he would have a powerful, free-ranging role in the Biden White House.

He is one of the president-elect’s most loyal advisers, and someone Mr. Biden will almost certainly turn to in times of crisis or in stressful moments. And Tuesday, in a widely anticipated move, Mr. Biden named Mr. Ricchetti his counselor, a position that typically confers relatively unrestricted access to the president.

It is familiar, if elevated, turf for Mr. Ricchetti, who became Mr. Biden’s chief of staff after beginning his career as a legislative aide for President Bill Clinton, working with the fractious Senate Democratic conference.

“They all basically wanted to come in and yell at you,” said John Podesta, Mr. Clinton’s former chief of staff, who hired him. “You had to sit there and take it. Steve was good at that.”

But what sets Mr. Ricchetti apart from a dozen other Biden veterans in the president-elect’s inner circle is his Swiss Army-knife utility. In addition to his political and fund-raising portfolio, he has overseen many of Mr. Biden’s personal and financial decisions as well as his political ones, according to people close to both men.

In the summer of 2016, Mr. Ricchetti and Mike Donilon were at the center of Mr. Biden’s agonizing deliberations over whether to run for president, drafting a memo urging him to challenge Hillary Clinton. Mr. Biden, still grieving from the death of his son Beau, rejected the advice, but their memo presaged the bedrock decency-and-moderation message that defined his 2020 campaign.

Later that year, Mr. Ricchetti and a dozen advisers — including Mr. Biden’s sister Valerie and Mr. Donilon, a publicity-shy message specialist whose appointment as a senior adviser was also announced on Tuesday — organized a network of post-vice-presidency nonprofits to provide an outlet for Mr. Biden’s policy interests and a launching pad for one last presidential run.

Mr. Ricchetti also served as Mr. Biden’s business manager, negotiating his seven-figure book deal and helping set up a $100-a-head book tour that helped the Bidens earn $15.6 million over the past three years, according to people with knowledge of his activities.

Mr. Ricchetti’s goal was to ensure Mr. Biden’s financial security “in the cleanest way possible, without doing anything he would ever have to apologize for,” as Mr. Ricchetti told a friend this year.

Mr. Ricchetti, a Cleveland-area native whose earthy, chatty demeanor mirrors Mr. Biden’s discursive regular-guy style, came to Washington straight out of college to work in the health insurance industry. He quickly showed an aptitude for fund-raising, which propelled him through a series of government and lobbying jobs.

He wound up wealthy, running a lucrative lobbying firm with a roster of clients that included General Motors, Experian, the American Hospital Association, AT&T, Eli Lilly, Nextel, Novartis and Pfizer, which is developing a coronavirus vaccine, before joining Mr. Biden’s staff.

The only public accounting of his income and assets, recorded in federal disclosure documents in 2012, revealed annual earnings of about $2 million from his firm, with assets, much of it in cash accounts, in the range of $3 million to $12 million.

Mr. Ricchetti’s K Street and Clinton connections were initially too much for President Barack Obama’s advisers, including Jim Messina and David Plouffe, who tried to block Mr. Biden from hiring him, according to people close to the situation.

A short, intense scrap ensued — ending only when Mr. Biden told Mr. Obama he had the “right” to pick his own top deputy, former aides recalled.

A compromise was brokered in which Mr. Ricchetti would be hired on the condition he be excluded from participating in the political team’s strategy calls, according to four people in Mr. Biden’s orbit.

There are no such preconditions on his hiring now.