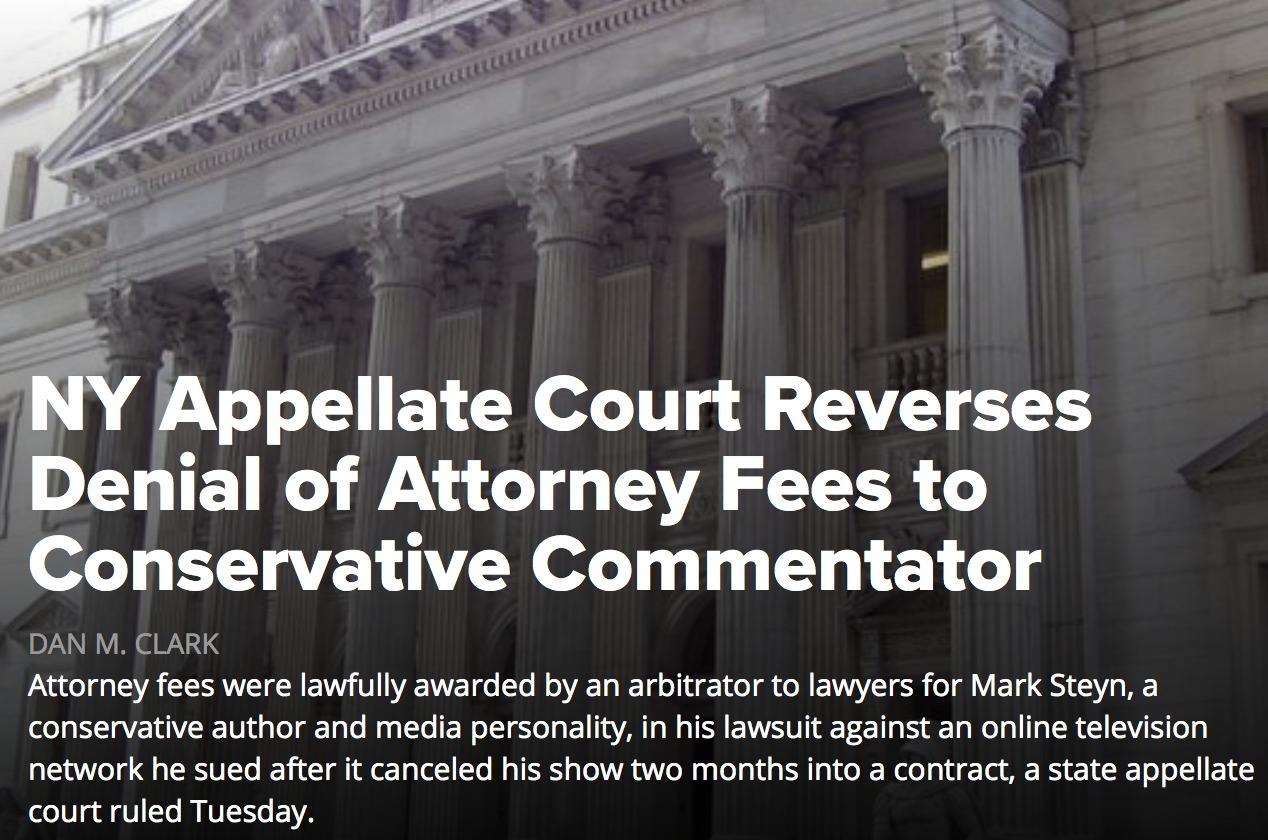 Those following the multiple suits by Blaze/CRTV and Cary Katz vs Mark Steyn and Mark Steyn Enterprises may have spotted this headline from the New York Law Journal:

In its decision, the Appellate Division reinstated over one million dollars in legal fees originally awarded to Mark Steyn Enterprises by Judge Elaine Gordon in the first arbitration Cary Katz’s CRTV/Blaze brought against Steyn in 2017. They were then vacated by (now retired) Judge Eileen Bransten of the New York Supreme Court citing the “American Rule” of not awarding legal fees to the prevailing party (as opposed to the “English Rule” in the rest of the Common Law world, in which loser pays). Yesterday’s decision reverses the previous reversal:

Steyn was represented in the arbitration and resulting litigation by Michael Murphy, a partner at Ervin Cohen & Jessup in Beverly Hills, California, and Erin O’Leary, an associate at Fishkin Lucks in Manhattan.

‘We are thrilled,’ Murphy said. ‘We are hopeful that CRTV will be mature and follow through with that as it promotes itself as being a champion of liberty and freedom of contract, and that they will satisfy their contractual obligations and pay this award…’

Melissa Howes, a spokeswoman for Steyn and president of Mark Steyn Enterprises (U.S.) Inc., celebrated Tuesday’s decision in a statement, calling it a step toward recouping what they’ve had to spend on legal representation in recent years.

‘The legal fees we have incurred from this continued malicious prosecution and abuse of process is in the millions and growing every day,’ Howes said. ‘We are gratified that the [Appellate Division] has upheld an award to recoup at least a portion of that.’

The decision is the latest in what’s turned out to be a legal saga between Steyn and CRTV. After Steyn’s show was canceled, he posted comments on social media criticizing the network. CRTV then accused Steyn of defamation, which led to a second arbitration.

The arbitrator in that case recently concluded that Steyn’s comments, which included calling a founder of CRTV a ‘sleazy bum,’ didn’t amount to defamation and dismissed the network’s claims for damages.

The second arbitration decision was issued just last month – again in Steyn’s favor, with costs being awarded, and with Blaze/CRTV losing on every single one of almost a hundred claims. As the Arbitrator noted in conclusion (page 45):

The bedrock guarantee of our society is that people should be able to speak and write freely in public. US Const Amend I; NY Const, art I, § 8. CRTV purports to stand for that principle as its ‘primary value’. See Tr. at p.1202 II. 9-15 (Alena Charles, Senior VP MP Marketing Blaze Media, Tr. p.1160 11020-23.) Yet, when push came to shove, CRTV sought to constrain that guarantee in a dispute with one of Its former talents.

We have thus far been sued by Blaze/ CRTV and its owner Cary Katz for a combined thirty-five million dollars. Twenty of that has been thrown out in two separate arbitrations – because it was Blaze/CRTV that breached our contract. Fifteen million remains pending in Katz’s suit in Nevada.

The so-called “American Rule'” incentivizes the kind of legal terrorism that Blaze/CRTV and Cary Katz continue to engage in – where the guy with the deeper pockets can pursue untold frivolous, baseless, harassing, abusive claims for years on end and not pay a price. The American Rule is at odds with America’s founding principles of liberty – a point worth considering on the eve of Independence Day. It should be eliminated in all courtrooms, not just in arbitrations.

For their part, the losers of CRTV/Blaze appear minded to continue fighting, indicating to the New York Law Journal they may appeal, again;

‘We continue to believe both awards appealed from were improperly made,’ [Blaze/CRTV counsel Jeffrey] Mitchell said. ‘This decision speaks to the risks parties take by agreeing to arbitration, and how there is little anyone can do after the fact when an arbitrator makes an erroneous award. This may be an issue for the Court of Appeals to address given the importance of it.’

It was plaintiff CRTV that chose to go to arbitration – both times.

I have been so touched by all your kind comments about my latest pair of legal victories over Cary Katz’s faux-conservative “network” Blaze/CRTV. First there were the five judges from the Appellate Division of the New York Supreme Court:

Why, yes, they did – although Mr Katz’s check appears to have been delayed by yesterday’s federal holiday.

Next came our total victory in Blaze/CRTV’s second ten-million-dollar arbitration suit against me and Mark Steyn Enterprises. As with the first arbitration, Blaze TV lost on every single one of its claims – of which this time there were nearly one hundred. Because Katz & Co refused to accept that they had flopped out on the first suit, we asked the Arbitrator on this second suit for a blow-by-blow scorecard of every one of those ninetysomething “statements at issue”. I’m impressed that Brian, a First Day Founding Member of The Mark Steyn Club from the Pacific North-West, made his way all the way through the decision to the judicial determination of Statement Ninety-Two:

‘I especially enjoyed this nugget from Page 44: “That reduces the final defamation claim to “cockwombles” – which suggests foolishness on the part of the believers as the article itself makes clear with its express etymological analysis. Perhaps the operative foolishness here is in CRTV believing that provides an actionable basis for a defamation claim under New York law.”

‘That last sentence could have been written by you, Mark, and attests the plaintiff is indeed a cockwomble. It’s as if the arbitrator finally let loose his own inner Steyn in finale before signing off.’

I enjoyed that paragraph, too, Brian: You would have thought that some of the famous “constitutional conservatives” in Katz’s employ might have pointed out to him that “cockwomble” isn’t actionable. However, I also enjoyed this analysis of Statement Sixty-Eight:

‘The balance of the remarks challenged pertain to the “cat tree” from the show, which was prominently on display through the evidentiary hearings in this proceeding.’

That’s true. We installed the extremely large cat tree in the courtroom for the week-long trial, just in case we needed to introduce it in evidence.

So Katz/Blaze/CRTV lose yet again. I believe our next stop is federal court in Nevada. It is a far duller though much longer saga than any in Tales for Our Time – although I don’t rule out turning it into a play or satirical novel.

Sole Speck on a Ghostly Waste

‘The Mob Has the Final Edit’

Must America Be in the Middle East?

News DSMW - January 25, 2020
0
It seems the Knicks have spent the past two decades chasing high-priced free agents or top draft picks trying to rebuild their franchise. Maybe they should spend as much time trying to find and develop a player like Pascal Siakam. Siakam wasn’t highly thought of when he was drafted by the...

Starling Marte doesn’t seem to be in the Mets’ plans

News DSMW - January 25, 2020
0
Starling Marte’s name has been dangled throughout the offseason and has intrigued the Mets, but according to industry sources little traction, if any, has occurred in recent weeks with the Pirates — who are looking to trade the veteran outfielder. On Friday, general manager Brodie Van Wagenen said the Mets weren’t...

News DSMW - January 25, 2020
0
President Trump's defense team will have 24 hours over three days to make its case to the Senate on why the president should not be convicted.        ...
MORE STORIES

Starling Marte doesn’t seem to be in the Mets’ plans