A pregnant woman infected with the novel coronavirus during her final trimester had the virus spread through the placenta to her unborn child, leading to neurological complications in the infant days after birth, according to a study published in Nature Communications on Tuesday. 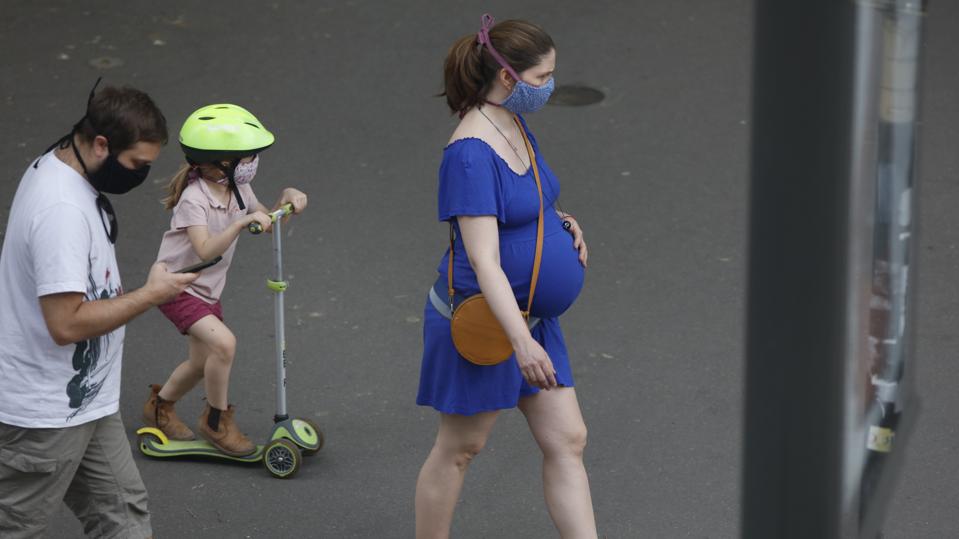 A pregnant woman walks in the street in Paris, on April 24, 2020 in Paris, France. The Coronavirus … [+] (COVID-19) pandemic has spread to many countries across the world.

Researchers in France found evidence that the virus was passed through the placenta to infect the fetus in utero, given the placenta showed signs of inflammation consistent with Covid-19 and contained a more potent viral load than in the mother’s or child’s blood.

The mother was admitted in March exhibiting a severe cough and a fever, and after the baby was delivered through a cesarean section, he tested positive for the virus.

Three days after birth, the baby exhibited sudden symptoms like irritability and muscle spasms, and after 11 days, the researchers observed white matter injury in the brain.

Following gradual recovery, the baby was discharged from the hospital after 18 days, and the researchers noted that after two months, the child’s health continued to improve, including a reduction in neurological injuries.

“Other cases of potential perinatal transmission have recently been described, but presented several unaddressed issues,” the researchers wrote. “For instance, some failed to detect [Covid-19] in neonates or only reported the presence of specific antibodies; others found the virus in the newborn samples but the transmission route was not clear as placenta, amniotic fluid.”

The Centers for Disease Control and Prevention released a report in late June that found pregnant women may be an increased risk of suffering from severe symptoms of Covid-19.

The long-term effects of Covid-19 are still not entirely known, though, people who have contracted the virus report ongoing symptoms. Additionally, the majority of hospitalized patients in a study conducted in Spain reported some type of neurological symptom, including headache, dizziness and impaired consciousness.

While people broadly assume contracting Covid-19 makes you immune to the infection moving forward, new research from King’s College London on Monday hints that antibodies may lose their potency after just a few weeks.

At least 35 killed in mass shooting that began at Thailand child care center,...

News DSMW - October 6, 2022
0
At least 24 children and 11 adults were killed Thursday in an attack that began at a child care center in northeastern Thailand, authorities said.       ...

News DSMW - October 6, 2022
0
A person of interest is in custody as the search continues for a family "taken against their will," on Monday, the Merced County Sheriff's Office said       ...

News DSMW - October 6, 2022
0
OPEC said Wednesday it will cut oil production by 2 million barrels a day, a move that will likely raise prices at the pump.       ...
MORE STORIES

At least 35 killed in mass shooting that began at Thailand...