WASHINGTON — The Trump administration’s socially conservative agenda has included a broad-based effort to eliminate transgender rights across the government, in education, housing, the military and, as recently as Friday, health care.

The Supreme Court most likely upended it on Monday.

The administration has been working to pursue a narrow definition of sex as biologically determined at birth, and to tailor its civil rights laws to meet it. Access to school bathrooms would be determined by biology, not gender identity. The military would no longer be open to transgender service members. Civil rights protections would not extend to transgender people in hospitals and ambulances.

But the administration’s definition is now firmly at odds with how the court views “sex” discrimination. In each of those settings, transgender Americans now probably have a stronger case to bring before the courts.

“Any law, and I think there are dozens, that says you can’t discriminate because of sex is going to have a reckoning with this ruling,” said Paul Smith, a professor at Georgetown Law School, who argued the landmark gay rights case Lawrence v. Texas before the Supreme Court in 2003.

Monday’s case was focused on employment law, a provision of the Civil Rights Act of 1964 known as Title VII. But Justice Neil M. Gorsuch’s opinion used language that is likely to apply to numerous areas of law where there is language preventing discrimination “because of sex” or “on the basis of sex.” Under the ruling, discrimination based on sexual orientation and gender identity ran afoul of the standard.

The ruling appeared to surprise officials across the administration. None of the agencies, including the Education Department, the Pentagon, and the Departments of Health and Human Services and Housing and Urban Development, that could be affected offered any comment beyond saying they were reviewing the decision.

President Trump offered a similar answer when asked by a reporter Monday afternoon. “They’ve ruled,” he said. “I’ve read the decision, and some people were surprised, but they’ve ruled and we live with their decision.” 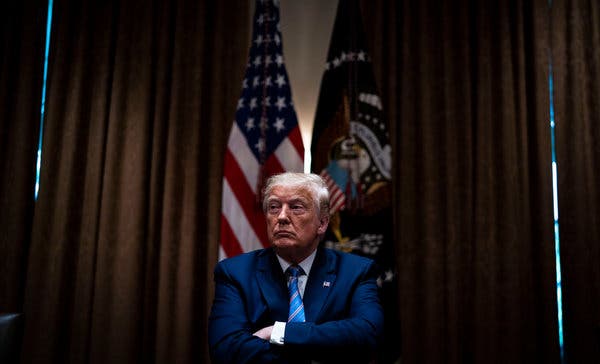 The Trump administration has been working to pursue a narrow definition of sex as biologically determined at birth.Credit…Doug Mills/The New York Times

The Trump administration has issued a series of regulations curtailing protections for transgender Americans. It weakened protections for transgender employees of government contractors. It rescinded Obama-era guidance protecting transgender students’ rights to use a bathroom or locker room corresponding with their gender identity. It is considering a policy to allow homeless shelters to consider biological sex rather than gender identity in placement decisions, even if a transgender woman says she faces abuse if placed with men.

And on Friday, it erased requirements that doctors offer and insurers cover medically appropriate treatment for transgender patients.

But because many policies were all built around a particular definition of “sex,” they are now vulnerable, said Joshua Block, a senior staff lawyer with the American Civil Liberties Union’s L.G.B.T. & H.I.V. Project, who is involved in several cases involving transgender students. Those policies stem not just from Title VII but also from Title IX, part of a 1972 education law barring sex discrimination.

“All of the Trump administration’s actions have been built around this assertion that Title VII and Title IX provide no protections to L.G.B.T.Q. people,” he said. “It’s an Achilles’ heel that’s been built into every single thing they’ve done.”

Even critics of the decision acknowledged that it could reshape the law broadly.

“Gorsuch’s argument is an argument about the logic of what constitutes sex discrimination,” Ryan Anderson, a senior research fellow at the Heritage Foundation, a conservative think tank that has helped guide this area of Trump administration policy, said in an email. “And if the court is consistent, it would apply that logic to similar provisions. Alas, the court got that logic wrong, and that’ll have negative consequences down the road.”

Such changes to similar areas of law are not guaranteed or automatic. It is possible that agencies could reconsider their current regulations in light of the new ruling. But it is more likely that further changes will require litigation. Gregory R. Nevins, the Employment Fairness Project director at Lambda Legal, a gay rights group, said there were some narrow ways that administration lawyers might try to distinguish between the language of the employment law and the laws governing education, housing or health care.

“I’m sure they won’t just fold up their tents — they’ll make it as hard as they can, and that’s why I still have my job,” he said. “But I think the center’s about to set on that.”

The Supreme Court ruling is not expected to directly affect the Trump administration’s ban on transgender troops joining the military, although critics of the ban say the ruling may affect how lawyers argue the multiple lawsuits against the ban that are making their way through the courts. The decision may shift the legal standard needed to defend such a policy against constitutional claims of sex discrimination.

“Today’s ruling makes the military, so often a successful leader in ending discrimination in American life, an outlier amid a national consensus that arbitrary discrimination is harmful and wrong,” said Aaron Belkin, the director of the Palm Center, an advocacy group. “With transgender workers protected by federal law in all other sectors, the military’s transgender ban is now even harder to defend.”

The administration has made fewer policies affecting civil rights for gay, lesbian and bisexual people, but the court’s ruling is likely to expand protections for them, too. Even the Obama administration declined to write protections into its health care rules on the basis of sexual orientation.

But it has been the rights of transgender people that have attracted the attention of the Trump administration.

One of the first acts the administration took, in February 2017, was to rescind Obama-era guidance informing schools that transgender students should have access to school facilities, including bathrooms and locker rooms, that correspond to their gender identity.

In November 2019, the Education Department drafted a “statement of interest” with the Justice Department to defend a private Christian school in Maryland that was kicked out of a state voucher program in part because it says “God immutably bestows gender upon each person at birth as male or female to reflect his image.”

And just last month, the Education Department ruled on the side of a conservative Christian group that a high school sports policy in Connecticut that allows transgender students to participate in athletics based on their gender identity violates federal civil rights law because it put biological females at a competitive disadvantage. In its letter threatening districts with federal funding and legal ramifications, the department said that “permitting the participation of biologically male students” denied “female student-athletes benefits and opportunities.”

On Monday, advocates for transgender students said the tide had turned against Education Secretary Betsy DeVos.

“In March of 2017, Secretary DeVos told me that she was waiting for the courts to rule clearly before she would protect transgender students as they deserve,” said Eliza Byard, the executive director of GLSEN, an L.G.B.T. rights organization for students. “Today,” the Supreme Court “couldn’t have been more clear.”