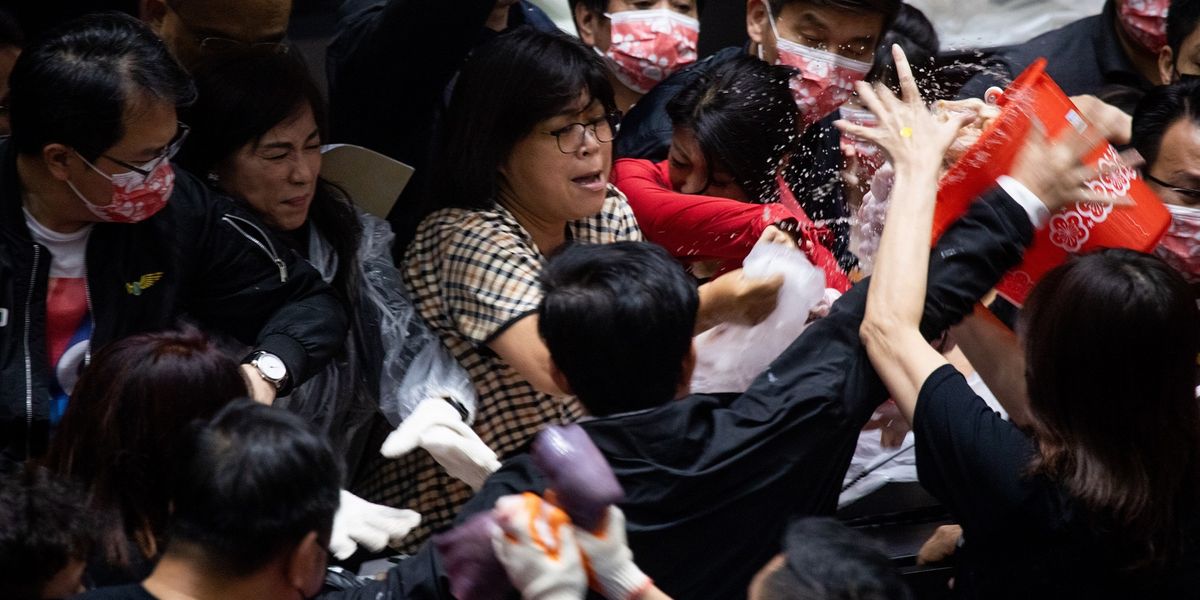 Taiwanese lawmakers’ battle over allowing the import of American pork and beef products devolved into a literal fistfight Friday on the floor of Parliament in Taipei, but lawmakers threw more than just punches: Pig intestines and other organs were hurled between opposing parties.

The Hill gave some background, explaining that “President Tsai Ing-wen’s administration decided to end a ban on imports of U.S. pork and beef in August,” and that “the lifting of the ban, set for January, signals a move toward a bilateral trade agreement with the U.S.”

The Associated Press reported that the pandemonium ensued in Parliament as Premier Su Tseng-chang of the ruling Democratic Progressive Party (DPP) attempted to address the chamber on the pork policy, when “opposition party lawmakers from the [Chinese] Nationalist party, also known as the KMT, blocked his attempt to speak by dumping bags of pig organs. Legislators from the ruling Democratic Progressive Party attempted to stop them, resulting in chaos and an exchange of punches.”

The outlet noted that while the amount of U.S. pork expected to be imported would only account for a small amount of the nation’s consumption, citizens and political factions opposed to lifting the ban have protested fiercely against the policy change.

Critics in Taiwan have expressed concern over a feed additive used by some U.S. pork producers called ractopamine, which is aimed at promoting leaner growth in the animals.

More than 100 countries ban meat with the additive, which is used by U.S. pig farmers to promote leanness but frequently poses an obstacle when it comes to exporting abroad. Washington has pressed successive Taiwanese administrations to lift the ban on meat from pigs given ractopamine-laced feed, but the issue has been highly charged in Taiwan, where politicians and industry groups have warned about adverse health affects of the additive.

There is a long history of Taiwanese lawmakers coming to blows, but Friday’s brawl involving pig guts was a whole new level of display.

KMT lawmakers said in a statement that they were left with no choice but protest, explaining, “In order to protect people’s health and protect the bottom line of food safety, the opposition party cannot but resist.”

The DPP called the KMT’s actions “disgusting” and a waste of food, The Guardian reported.