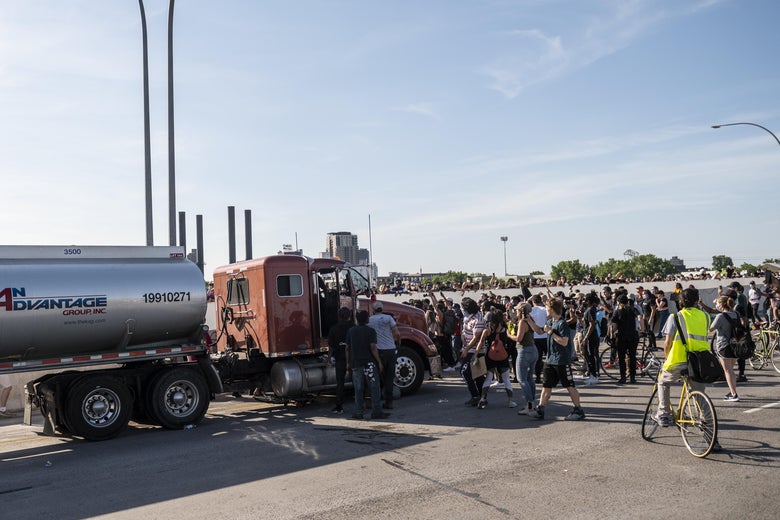 People react after a tanker truck drove into a crowd peacefully protesting the death of George Floyd on the I-35W bridge on Sunday in Minneapolis.

In a confusing episode that authorities are still trying to clear up, a tanker truck sped toward a crowd of thousands of demonstrators who were marching on a bridge in Minneapolis late Sunday afternoon to protest the killing of George Floyd. Demonstrators managed to scatter, and surprisingly there were no immediate reports of any seriously injured protesters. The harrowing scene was caught on video from multiple angles and shows how the tanker truck barreled toward the crowd that was on the I-35W bridge.

A tanker truck barreled through thousands of peaceful protesters in Minneapolis as the crowd rushed out of the way. The driver was arrested and officials said no one was hit, though some protesters told local media that they had seen people with injuries.https://t.co/FohD5ehXFA pic.twitter.com/E6hssu9yaQ

Witnesses said the truck sped toward the crowd beeping its horn as dozens had taken a seat or a knee for a moment of silence. “A truck came. The horns were blaring. It was picking up speed. It was plowing down the highway into the protesters,” Melanie Ramos of Minneapolis told the Star Tribune. “It was the most terrifying thing I’ve ever seen.” Another witness said he could smell the fuel and hear it “sloshing around” as the tanker approached. Minnesota Department of Public Safety Commissioner John Harrington described it as “one of the most dangerous things I’ve ever seen.”

Protesters parted like the red sea as a tanker came speeding down the I-35 . One guy jumped in front of the truck to try and get the driver to stophttps://t.co/7Gv2lgF3on pic.twitter.com/a1yKVEBGER

RAW VIDEO: Jeff & Sara Radichel sent us this video of the moment a tanker truck drove through peaceful protesters on the I-35 Bridge in Minneapolis | https://t.co/OA7HXWJUrI #GeorgeFloyd pic.twitter.com/N9QetxZzXN

Protesters swarmed the truck and pulled out the driver. Witnesses on social media said that law enforcement pepper sprayed peaceful demonstrators who had rushed out of the scene. There are reports that some demonstrators tried to stop the attack on the driver and several laid on him as protection. Police moved in and took the driver into custody. He was treated for non–life threatening injuries before being taken to jail. Officials say it isn’t clear whether the driver was injured by the crash or protesters.

INTENSE VIDEO shows the moments right after a tanker truck driver barreled through a peaceful protest of thousands on 35W in Minneapolis. pic.twitter.com/hzLB4BLqZv

Authorities said the truck was already on the freeway before it was closed for traffic about an hour earlier. “I don’t know the motives of the driver at this point in time,” Gov. Tim Walz said. “But at this point in time to not have tragedy and many deaths is an amazing thing.”

For more Slate coverage of George Floyd’s death and the nationwide protests, listen to The Gist, or read more: