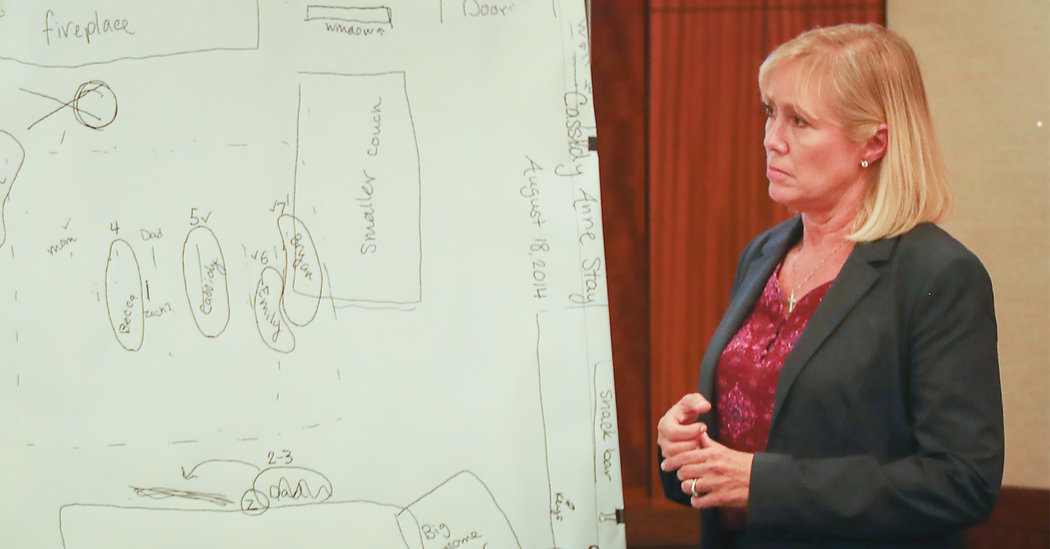 A prosecutor in Harris County, Texas, resigned on Monday after she was criticized for sharing a Facebook post that seemed to compare demonstrators for racial justice to Nazis who “tore down statues” and “banned free speech.”

The post was not written by the prosecutor, Kaylynn Williford, but came from a Facebook page that has criticized the Black Lives Matter movement and praised President Trump. It included a black-and-white photograph of wedding rings and a caption that said the rings had been “removed from Holocaust victims prior to being executed.”

Those words seemed to evoke recent demonstrations for racial justice following the killings of George Floyd, Breonna Taylor, Tony McDade and others at the hands of the police. The protests have often been accompanied by demands to remove Confederate statues and other monuments that demonstrators see as symbols of white supremacy.

The Houston Chronicle reported on the post on Friday.

In an emailed statement on Monday, Ms. Williford, who held a managerial position as the trial bureau chief for the District Attorney’s Office in Harris County, which includes Houston, confirmed that she had shared the post, but said she had not intended to make a comparison to Black Lives Matter protests.

“What I interpreted as a post that promoted tolerance was taken in a completely different manner,” she said.

Dane Schiller, a spokesman for the District Attorney’s Office, said of the post: “It was inappropriate. We took action and the employee resigned.”

Mauro Beltramini, a criminal defense lawyer in Houston, helped bring the post to the attention of the public. He saw it on Friday, he said, when a friend in the District Attorney’s Office shared it with him.

“I said, ‘You know what, this does have racial connotations to it, given the context of the time that it was posted and everything going on socially in this country,’” he said. “If anything, it just shows very poor judgment.”

Mr. Beltramini said that he shared the post with some of his friends, including black employees in the District Attorney’s Office, to get feedback and decided that “unequivocally, 100 percent yes, this is racist.”

He added that as a person of Jewish ancestry, he was troubled by the comparison between demonstrators for racial equality in the United States and the oppression of Jewish people in Nazi Germany.

On Friday afternoon, he shared a screenshot of the post on his own Facebook page. “Here’s a screenshot of the H.C.D.A.O.’s Trial Bureau Chief being racist,” he wrote, referring to the Harris County District Attorney’s Office and adding an expletive. The attention snowballed from there, and a Change.org petition calling for Ms. Williford’s resignation was signed by more than 100 people over the weekend.

In her statement, Ms. Williford said she first received critical feedback from a friend’s daughter shortly after she shared the post on Thursday. “She took offense and thought I was comparing the post to Black Lives Matter,” Ms. Williford said. “That was never my intent, and I took the post down the next morning when I saw her comments.”

She also pointed to past cases in which she had worked to avoid a wrongful prosecution or to secure a pardon for defendants of color. “I have spent my career defending the rights not only of victims, but those wrongfully accused,” she said.

Kim Ogg, the Harris County district attorney, said in a statement on Monday that “this organization and my administration has zero tolerance for racism in any shape or form.”

While Ms. Ogg said that it was “not our intent to involve ourselves in employees’ personal lives,” she added that the law permitted her office to “implement graduated sanctions ranging from education and counseling up to termination” in cases where an employee’s social media posts or private conduct “publicly contradict and violate this office’s policies.”

“When speech made in the privacy of one’s home or on social media contradicts our core values,” she said, “we take action.”