Stop Donald Trump now, Democrats warned at his impeachment trial, or will he take on the aspect of a king.

The prophecy appears to have been borne out, as the US president hands out jobs to loyalists, purges perceived enemies, pardons convicted criminals and swaggers as if with a divine right.

On Saturday, addressing the biggest annual gathering of US grassroots conservatives, Trump wondered aloud at it being “sort of a miracle” he has got so much done despite all he’s been through.

“Maybe it’s right there, right?” he asked, pointing to the heavens. “Thank you, God.”

The crowd loved it. Trump stayed away from a sceptical Conservative Political Action Conference in 2016 but now he is its sun king. Supporters in a palatial ballroom at the National Harbour leaped to their feet, whooping and cheering, many wearing “Make America great again” and “Keep America great” caps.

They’re coming after me, and we fight them back

They roared their approval when, like a medieval monarch who has survived a bloody insurrection, Trump vowed revenge.

“They’re coming after me and we fight them back,” he said. “And now we’re going after them because we have no choice. We have to straighten out our country. But despite the best efforts of the leftwing fanatics, their scams, schemes, slanders, they’ve all been discredited, totally discredited.”

He singled out James Comey, whom he fired as director of the FBI, and special counsel Robert Mueller, who led the Russia investigation, as enemies whose heads deserved to end up on metaphorical spikes.

“How is Comey doing?” he asked, sardonically. “How is Bob Mueller doing? That was a great performance in Congress. ‘Raise your right hand.’ ‘What?’”

There was also mention of the Utah senator Mitt Romney, who voted to convict Trump at the impeachment trial and, like a rebellious duke, was banished from CPAC this year. Trump described Romney as “lowlife” and the crowd booed lustily.

The president also spoke ominously of getting rid of bad people in government who are “not people that love our country” and launched a familiar tirade against the “fake news” media.

He gave little sign that he is worried about the democratic inconvenience of an election in November. Just a couple of hours after trying to muster gravitas in the White House briefing room while discussing the coronavirus, he reverted to the comfort zone of freewheeling rally style.

He took delight in mocking each of his Democratic rivals.

“We’ve got Sleepy Joe [Biden], we’ve got Crazy Bernie [Sanders], we’ve got Mini Mike [Bloomberg] but I think he’s out of it,” he said. “That was probably the worst debate performance in the history of presidential debates.

“It just shows you can’t buy an election. I mean, there’s a point at which people say, ‘You gotta bring the goods a little bit, too.’”

The president said: “We hit a nerve!” 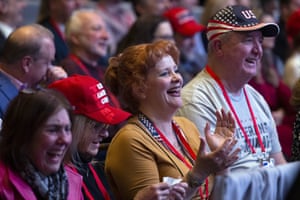 He also took a swipe at Biden, the former vice-president, for a gaffe in a recent debate: “Did he just say that we killed 150 million people? That’s half of our population.”

Trump even held an instant poll by asking the audience to “scream” for whether he would beat Biden or Sanders more easily. There was a significant scream for Biden but a much louder and sustained one for the democratic socialist senator from Vermont.

Trump suggested Biden would be “sitting in a home” for the elderly rather than governing, whereas Sanders might be a communist. That chimed with the conference’s theme: “America vs socialism”.

In a characteristically rambling monologue, he seemed genuinely unable to comprehend how teenage climate activist Greta Thunberg beat him to the precious title of Time magazine person of the year.

But he finished his speech by hugging and kissing the flag – a familiar move which elicited a huge cheer from his devoted subjects.

For them, and for Trump’s loyal courtiers at the White House and on Capitol Hill, it is a case of long live the king.