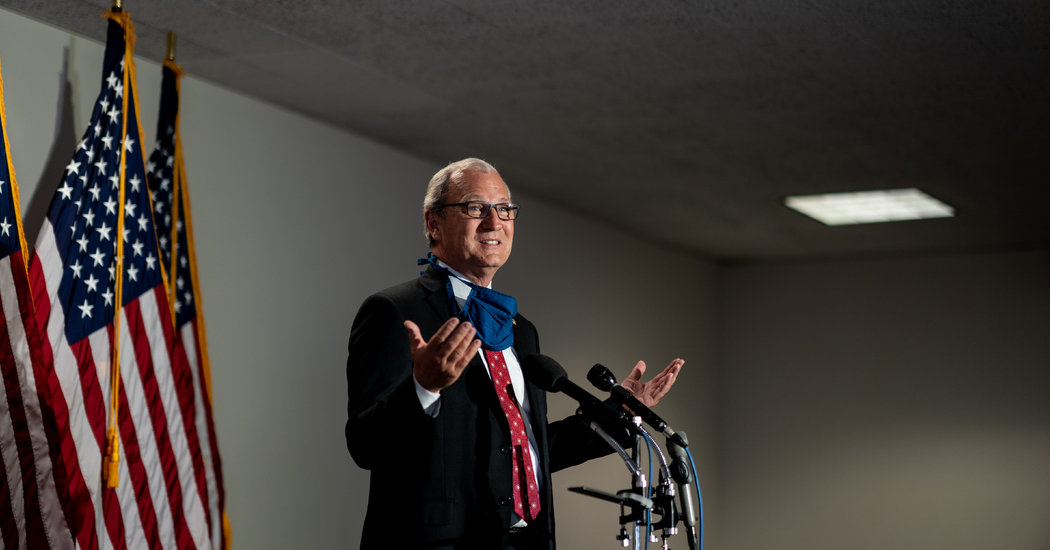 WASHINGTON — On the 161st day of the fourth year of the Trump presidency, having grown accustomed to Republican lawmakers’ favorite excuse for refusing to comment on President Trump’s latest incendiary tweet, reporters resorted to a rare tactic.

They printed out copies of Mr. Trump’s post — this one containing an unsubstantiated suggestion that an older protester shoved and injured by the police in Buffalo was an Antifa provocateur who staged his own assault — for any Republican who might try to fall back on what has become a stock response: “I didn’t see the tweet.”

It did not work. Even faced with documentary evidence of the president’s inflammatory remark, most Republicans averted their gaze on Tuesday, declining to comment as they darted through the hallways of Capitol Hill and appearing to wish away what was on paper in front of them.

Their reactions were the most vivid illustration to date of an extraordinary dynamic among elected Republicans that has been building almost since the moment Mr. Trump took office — behaving as if they have no idea what he is doing or saying. After thousands of tweets carrying falsehoods, racist language and demeaning barbs against their own colleagues — not to mention the news reports, book excerpts or speeches that have roiled this administration — lawmakers in his party have largely settled on blissful ignorance as a way of avoiding defending the indefensible.

“I didn’t see it — you’re telling me about it,” Senator Marco Rubio, Republican of Florida and a frequent user of the platform, told a CNN reporter of the message. “I don’t read Twitter, I only write on it.”

Handed a copy of the post, Senator Kevin Cramer, Republican of North Dakota, scanned the page before saying, “I don’t even know the episode he’s talking about.”

Senator Ted Cruz, Republican of Texas, who was trained as a lawyer and has himself been targeted by Mr. Trump on Twitter, made a process argument: He has a longstanding policy of not commenting on the president’s tweets.

During his weekly news conference, Senator Mitch McConnell of Kentucky, the majority leader, pointedly redirected the conversation toward discussions about efforts at overhauling law enforcement and about how the Senate was responding to protests across the country.

“As I said, what we are discussing in the Senate Republican conference is what response we think is appropriate to the events of the last two weeks,” he said when pressed on whether Mr. Trump’s Twitter post was appropriate.

The episode reflected a now-ingrained political calculus for Republicans when confronted with outrageous utterances from a vindictive president who detests being criticized. Instead of addressing the content or the person responsible, Republicans long ago determined that the least politically fraught avenue is to ignore it altogether, in the hope that the outrage of the day quickly fades. It has proved a steady bet, given that Mr. Trump’s Twitter provocations almost always give way to yet another frenetic news cycle, often generated by the president himself. Privately — and sometimes publicly — they have voiced frustration with having to respond to every missive issued.

“Most of us up here would rather not be political commentators on the president’s tweets,” said Senator John Thune of South Dakota, the No. 2 Republican in the Senate. “That’s a daily exercise that is something you all have to cover.” (Mr. Thune acknowledged that he saw both the tweet and the video of the assault, and deemed the post “a serious accusation.”)

Even Mark Meadows, a former representative and now the White House chief of staff, has maintained use of the tactic, telling reporters as he left Capitol Hill on Tuesday that he had “learned a long time ago not to comment on tweets.”

And yet Mr. Trump’s Twitter feed is impossible for Republicans to ignore. The charged language Mr. Trump uses and retweets mingle on his Twitter feed — which has 81.9 million followers — with critical updates on personnel (the abrupt firing of a cabinet official, for instance) and policy changes (including increased tariffs and recognition of Israel’s sovereignty in the Golan Heights).

But lawmakers insisted that it was far more productive, particularly during a pandemic and amid growing demands for action to address police brutality and the racial disparities in the country, to remain focused elsewhere.

“If we sat around all day and just worried about what the president tweeted instead of legislating, then we’d be caught in your vortex,” Mr. Cramer said in an interview after reading the tweet. “Most of the time when the president tweets something that seems crazy, somebody else tells me.”

“I don’t mean to be flippant,” he added. “When I wake up in the morning, the president’s tweets are not in the top 100 things I think about.”

Asked whether it was unusual for lawmakers to remain unaware of what directives Mr. Trump, ostensibly the leader of their party, is broadcasting on Twitter, Mr. Cramer paused.

“I think it’s weird,” he said, “that people think we spend a lot of time looking at it.”

The few Republicans who did offer brief rebukes of the president’s tweet on Tuesday morning were the handful who had long ago established themselves as willing to break with Mr. Trump when they believe it is warranted. But with six months left in Mr. Trump’s term, even they seemed weary of being the lone voices of mild condemnation.

Senator Lisa Murkowski, Republican of Alaska, dutifully read the printout of Mr. Trump’s tweet presented to her by a Politico reporter, then gasped: “Oh lord, ugh.” (Ms. Murkowski, who incurred a Twitter rebuke from the president last week over critical comments, previously told reporters that “I cannot live in fear of a tweet” after that attack.)

And Senator Mitt Romney, Republican of Utah, pointedly rejected the stock response that so many of his colleagues had resorted to in avoiding weighing in.

“It was a shocking thing to say,” he added, “and I won’t dignify it with any further comment.”