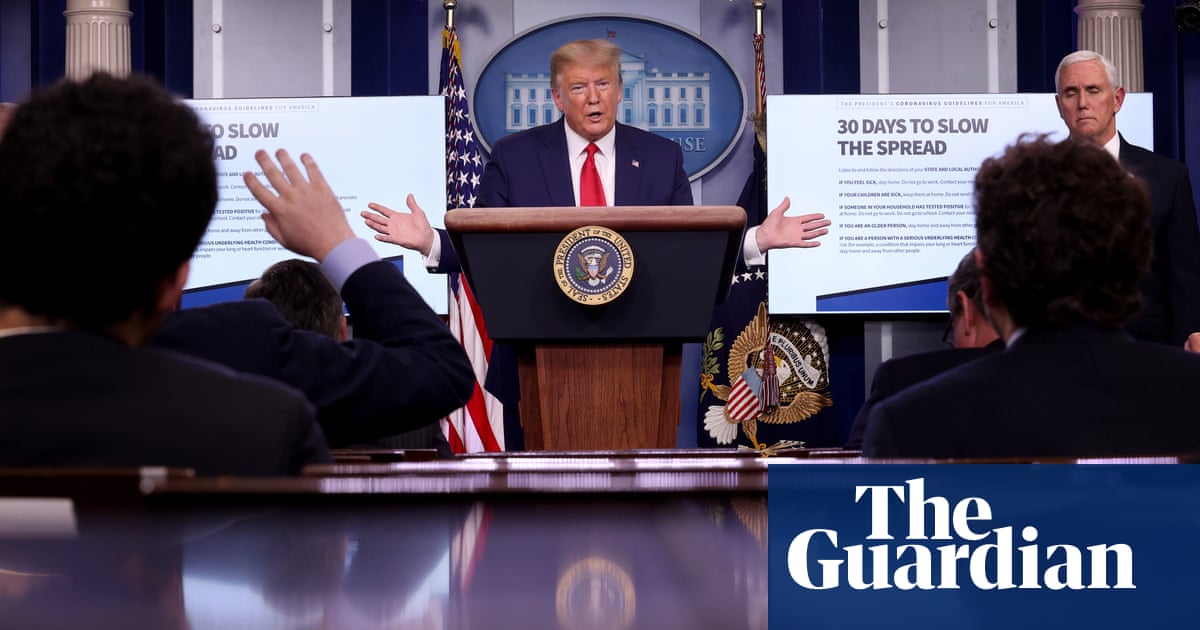 As reporters waited languidly on plastic chairs a few feet apart, absorbing birdsong and soft spring sunshine, the White House rose garden was an oasis of calm in a stricken nation. But once Donald Trump began taking questions, the tranquillity was shattered.

Yamiche Alcindor of PBS NewsHour put the US president’s own words to him. “You’ve said repeatedly that you think that some of the equipment that governors are requesting, they don’t actually need. You said New York might need –”

Trump interrupted twice: “I didn’t say that.” Alcindor stood her ground: “You said it on Sean Hannity’s, Fox News.” Then Trump lied: “I didn’t say – come on. Come on.”

Trump on urgent requests for ventilators: ‘I don’t believe you need 30,000’

And so it went on last Sunday. Trump denied Alcindor a second question, only for a CNN reporter to pass the microphone back to her. Later, when the CNN reporter also quoted Trump’s past remarks, the president resorted to an old epithet: “Fake news.”

America and the world have been transformed unimaginably by the coronavirus pandemic but Trump’s war on the media has remained a constant and possibly even intensified. The intemperate outbursts might be interpreted as signs of a leader cracking under the pressure of his greatest crisis, for which his previous career offered no preparation.

But they are also striking in their echo of authoritarianism. While Trump has visibly delighted in fawning questions from the rightwing One America News Network, he has also implied that dissenting questions from other reporters signal disloyalty when the nation should be pulling together.

“But just so you know, we’re all – you, me, everybody – we’re all on the same team,” he told Alcindor on Sunday. A day later, when Alcindor asked why the US still lagged behind countries such as South Korea on testing per capita, he admonished: “You should be saying congratulations instead of asking a really snarky question.”

President Trump today at the White House said to me: “Be nice. Don’t be threatening.”

I’m not the first human being, woman, black person or journalist to be told that while doing a job.

My take: Be steady. Stay focused. Remember your purpose. And, always press forward.

That alerted Maggie Haberman, White House correspondent of the New York Times, who commented on Twitter: “Have never in 24 years in newspapers had anyone tell me reporters should be “celebrating” or “applauding” someone until the last two years. It is how the president frames his view of coverage, and his supporters and allies have adopted that posture.”

Railing against the media has been a defining feature of Trump’s political identity, a punchline at campaign rallies, deploying barbs such as “the enemy of the people”. But when, after weeks of denial, he was finally forced to accept the scale of the coronavirus pandemic, he initially tried a more sombre and conciliatory tone.

Even now he continues to offer an olive branch. “I mean, even the media is much more fair,” he said on Sunday, before quickly qualifying: “I wouldn’t say all of it, but that’s OK. They should be fair because they should want this to end. This is – this is about death.”

Yet once tough questions start landing like arrows, the president reverts to type: belligerent, indignant, pugnacious, affronted by anyone with the temerity to dig up past statements or query his administration’s failure to prepare.

The missing six weeks: how Trump failed the biggest test of his life

On 20 March, Peter Alexander of NBC News asked a seemingly innocuous question: “What do you say to Americans who are watching you right now who are scared?”

But Trump lashed out: “I say that you’re a terrible reporter. That’s what I say.”

Then Jon Karl, ABC News chief White House correspondent , pressed: “And everybody who needs one will be able to get a ventilator?”

Then came Sunday’s exchange with Alcindor, querying Trump’s remarks on Fox News when he suggested that New York state was exaggerating how many ventilators it will need.

Alcindor persisted: “My question to you is: How is that going to impact –”

Trump barked: “Excuse me. You didn’t hear me. That’s why you used to work for the Times and now you work for somebody else. Look, let me tell you something: be nice. Don’t be threatening.”

It was loaded language. Later, Alcindor tweeted: “I’m not the first human being, woman, black person or journalist to be told that while doing a job. My take: Be steady. Stay focused. Remember your purpose. And, always press forward.”

And it was not the first such incident. On 13 March, when Alcindor asked why Trump had scrapped the White House’s National Security Council pandemic team two years earlier, he snapped: “Well, I just think it’s a nasty question.”

On Monday, it was the turn of another thorn in Trump’s side, Jim Acosta of CNN, to read back to him his past statements downplaying the threat of the virus and ask: “What do you say to Americans who believe that you got this wrong?”

The president predictably erupted. “It’s why people just don’t want to listen to CNN any more,” he said. “… Instead of asking a nasty, snarky question like that, you should ask a real question.”

The briefings have been compared to rallies and make frustrating viewing. Some observers want the media to take a more combative approach. Chris Whipple, a writer, documentary maker and author of The Gatekeepers: How the White House Chiefs of Staff Define Every Presidency, said: “God bless Yamiche Alcindor but I think the rest of the press corps need to be more aggressive, not less aggressive.

“When you’re confronted with a bully, you have to punch back. The press corps need to be more aggressive in holding the president’s feet to the fire or just stop showing up.”

Whipple added: “The president’s coronavirus briefings have been a disgrace. He is a fountain of misinformation, partisanship and point scoring that is the last thing you need in a time of crisis, especially in a pandemic when there is a premium on truth.”

Joe Lockhart, a former White House press secretary, argues the briefings are aimed at two audiences, with the first part, when Trump reads general remarks, aimed at all Americans, and the second, in which he spars with reporters, aimed at his hardline supporters.

“It appeals to his base because they are suspicious of the media and it undermines the people who are telling the story straight,” he said. “His base love it when he’s obnoxious and when he talks down to reporters. But the one place he’s had trouble is when reporters read his own words back to him.”

Lockhart, who hosts the Words Matter podcast and tweets a “Daily White House Shadow briefing”, added: “Trump’s entire strategy from day one has been to divide people. It’s not a surprise that when everyone says he should help us to unify as a nation, he looks at it and says ‘let’s divide’.”