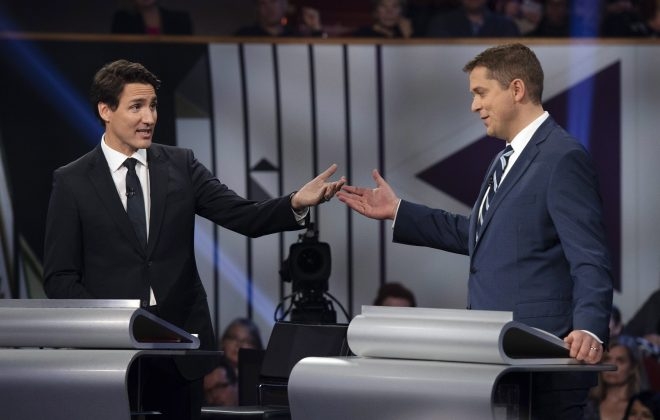 The Prime Minister of Canada is a pathological narcissist weirdo. Last year’s tour of India dressed as a Bollywood bridesmaid strongly suggested as much, and his multiple blackface capers stretching into early middle age merely confirm it. The Liberal establishment, wittingly or not, chose to build a personality cult around the pathological weirdo. In the normal course of events, and in a healthy functioning polity, that would invite a strong rebuke from the electorate.

Yet, as we game out various likely scenarios for Monday night’s results, that strong rebuke appears to be the one thing that’s not on the cards. If anything, the revelation that Justin Trudeau is Jolson Trudeau only confirmed the Grits and the media in their determination to drag the Prime Minstrel over the finish line: After four years of hammering anyone who dissents from the New Trudeaupia as a hateful racist, the exposure of Justin as a shallow over-promoted nitwit who can’t even be left alone with a tub of shoe polish is too much: it taints them, it daubs them with Justin’s Kiwi, all the clever people who presume to lecture the ignorant masses and regulate and coerce them into the new virtues. For if the coolest PM on the planet is just a third-rate mammy singer who wants you to tally his banana, what does that say about the backstage boys and the media panjandrums who anointed him “because it’s 2015”?

So they have worked hard to contain the damage. On Monday night, absent a massive polling upset, everyone is expecting either (if he holds it together) a Liberal minority government led by Trudeau or (if not) a Conservative minority government led by Andrew Scheer. In a parliamentary democracy, what matters is not who wins the most seats but who can command a majority in the House of Commons – which is why the media and the Tory leadership are now engaged in a semi-literate constitutional dispute about whether, in the Westminster system, the Queen invites the outgoing PM or the head of the largest party to take first crack at forming a government. Last year in New Brunswick, the Liberals won one seat fewer than the Tories but asked and received permission to continue in government – which they did, until losing the confidence motion three weeks later. Likewise, in the 2010 UK election, Labour had almost fifty seats fewer than the Tories but Gordon Brown nevertheless made a sustained effort for the best part of a week to put together a deal with the Liberals and the Scottish Nationalists. The mammy singer will not lose that badly and will want to stay on far more than Brown ever did.

If you’re a conservative – as opposed to an Andrew Scheer capital-C Conservative – this has been a miserable campaign. I have understood, at least since the duplicitous Tory machinations preceding the House of Commons Justice Committee I attended, that during an election campaign the only role required of actual conservatives is to go to a Trappist monastery for the duration and leave it to the cap-C Conservatives to not frighten the horses: For example, and plucked more or less at random, it seems an alleged “transphobic” feminist will be giving a talk at Toronto Public Library. Whoa!!! It is now apparently routine for writers (of all people) to demand that fellow authors who hold contrary views should be banished from the public square, so CanLit’s worstselling novelists are threatening to boycott the library. The admirable librarian is standing firm on free-speech grounds.

What should the conservative position be in such a dispute? Well, the Conservative Mayor of Toronto, John Tory (who despite his name is a Red Tory heavy on the Red and exceeding light on the Tory), has decreed that Megan Murphy, the “transphobe” in question, is free to rent the Scotiabank Arena to air her views but that there is a “higher responsibility for public buildings“. That’s exactly backwards, of course: The Scotiabank Arena is free to tell Miss Murphy to take a hike, but a public facility paid for by all taxpayers of many opposing views should not privilege one group of citizens over others. That’s the “higher responsibility”.

The justification for tosspots like Tory is that sure, they may sell you out on core western values like free speech, but getting on the transwagon ensures they’ll survive in office long enough to get that business-tax cut passed or the airport-expansion bill approved. Andrew Scheer is testing that thesis to the limit. He has spent the last month standing there being Not Justin Trudeau because he and his minders have decided that’s all he needs to do to win. You may not be entirely persuaded: The usual rule in politics is that something beats nothing, and it could well be that blackface beats no-face.

As Mrs Thatcher used to say, first you win the argument, then you win the vote. So not engaging in any serious argument has certain consequences. John Robson puts it this way:

As Canada’s worst election ever staggers toward the finish line, a theme has finally emerged. Despite the best efforts of the party leaders to say nothing coherent or true at any point, we know what it’s about. Everyone is running against the Tories. Including the Tories. Makes you wonder what they’re so afraid of.

Indeed. On Monday Canadians will have a choice between five left-of-centre social-democratic parties: the crony left (Liberals), the hard left (NDP), the eco-left (Greens), the secessionist left (Bloc) and the squish left (Conservatives). The only alternative to the crony-hard-eco-secessionist-squish social-justice statism on offer is a disaffected Tory, Maxime Bernier. John Robson again:

Bernier may be an imperfect human being and a flawed politician. It happens. But whatever his blemishes, his party exists because the Tories abandoned their beliefs and their base long before 2017 on every important conservative issue from free markets to traditional social values to strong national defence.

M Bernier would like to rethink immigration policy, but that makes him a racist so he shouldn’t be allowed in the debates because, per John Tory, while he’s free to rent the Scotiabank Arena, public buildings such as the CBC studios have a “higher responsibility”.

It’s a good thing for the other guys that Bernier was snuck in to a couple of debates because otherwise they’d be running against an entirely mythical beast – a red-meat conservative behemoth stomping the land for which there’s less corroborating evidence than of Justin in blackface but which is nevertheless mysteriously threatening to steamroller your social-justice utopia into the asphalt. Ah, if only that were true: I hope voters in the Beauce will return Max, and I hope our small band of readers in Longueuil-Saint Hubert will persuade their neighbours to turn out for our pal Ellen Comeau; but this is not shaping up as a breakthrough night for the People’s Party.

Nevertheless, sans Max, what’s left? Virtue-Dancing With The Stars: Elizabeth May says Trudeau wants to eliminate CO2 completely, but not until 2030! Justin Trudeau says that Scheer didn’t believe in gay marriage before 2005! Jagmeet Singh says that May’s selling out to the billionaires by promising to balance the budget by 2047, whereas he won’t balance the budget ever! Yves-François Blanchet says Singh’s ten-point plan to eliminate bovine flatulence by last Tuesday is too little too late compared to the Bloc’s plan to reduce Canada’s carbon footprint by declaring Quebec independent …oh, wait, sorry, that was almost an intrusion of something real: I meant “by declaring Quebec fully sovereign when it comes to jurisdiction over selecting its own pronouns for the door of the transgender bathroom: je, moi, mon…”

And at that point in the debate Lisa LaFlamme moves on to the next urgent concern of Canadian voters: Are politicians’ aboriginal land acknowledgments too perfunctory? Should they take up more time at the beginning of each debate? Say, the first hour or two?

John Robson argues that all five candidates are running against proposals that no one’s proposing because deep down inside they know that lurking somewhere out there is not a mythical right-wing Bigfoot but mere prosaic Reality, which sooner or later will assert itself. I’m not so sure. I think it’s more an enforcing of the ground rules, a true land acknowledgment that public debate can only take place within the bounds of this ever shriveling bit of barren sod. Those who want to fight on broader turf – such as M Bernier – cannot be permitted to do so.

All elections start as a referendum on the incumbent: In this case, Mister Sunny Ways turned out to be just the usual corrupt cronyist with a blackface fetish. Given that Andrew Scheer is the only alternative prime minister on offer, recent polls showing Liberal decline matched by huge rises for the Bloc, NDP and Greens is a bleak comment on Conservative strategy. Perhaps, like the burnt-corked Justin, Scheer is merely playing dressup, putting on his vanillaface to mask the true blue Tory underneath. But, if anything, the opposite is more likely, as we may soon find out.

As fascinating as the constitutional point about a hung parliament is, it overlooks the practical reality – which is that Trudeau does not want for coalition partners, and Scheer most certainly does. Justin Trudeau can cozy up to the NDP and the Greens, with whom his differences are barely detectable; the Bloc Québécois would not, formally, join the government of a country they want to break up, but could be induced (ie, bribed) to lend confidence and supply. As we know, the mammy singer can tally his bananas, and in this case he’s not short of bananas to tally.

But where does Andrew Scheer go a-tallying? “We don’t respect Conservatives,” says NDP honcho Jagmeet Singh, explaining why his first priority is keeping the Tories out. In the event that the People’s Party at least retains its leader’s seat, Maxime Bernier has no reason to elevate to Sussex Drive a man he holds in complete contempt. But more to the point, even assuming that the Greens or the Bloc would be receptive to the Conservatives’ blandishments, all that means is that however “conservative” Mr Scheer is at the close of polls on Monday he’s going to be even less so by the end of negotiations.

Which is a mind-boggling concept.

Three days to go. As the Prime Minstrel would sing: