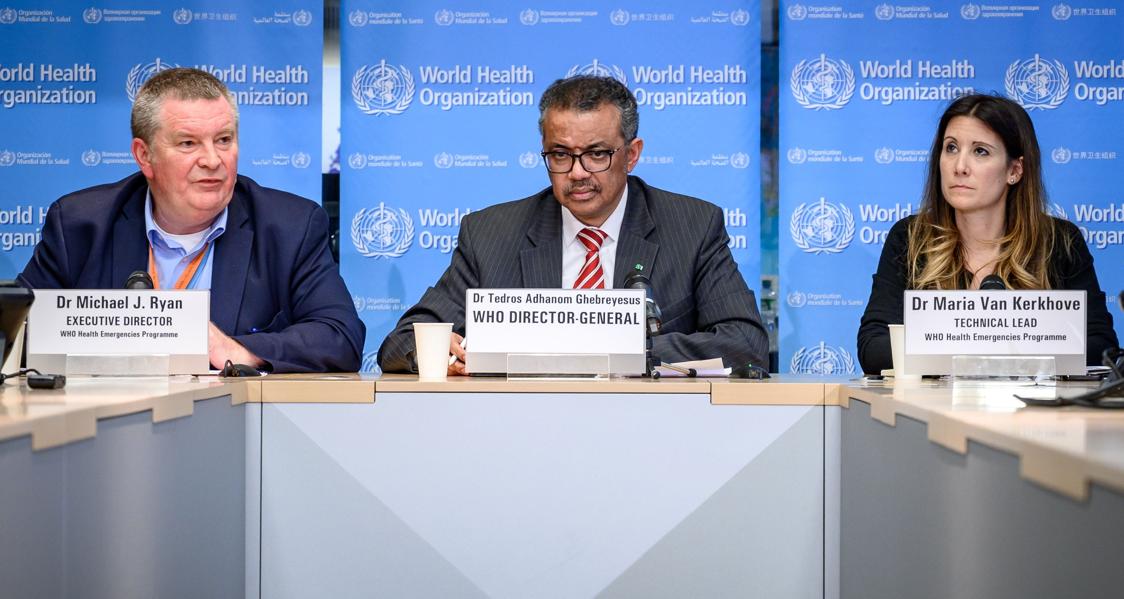 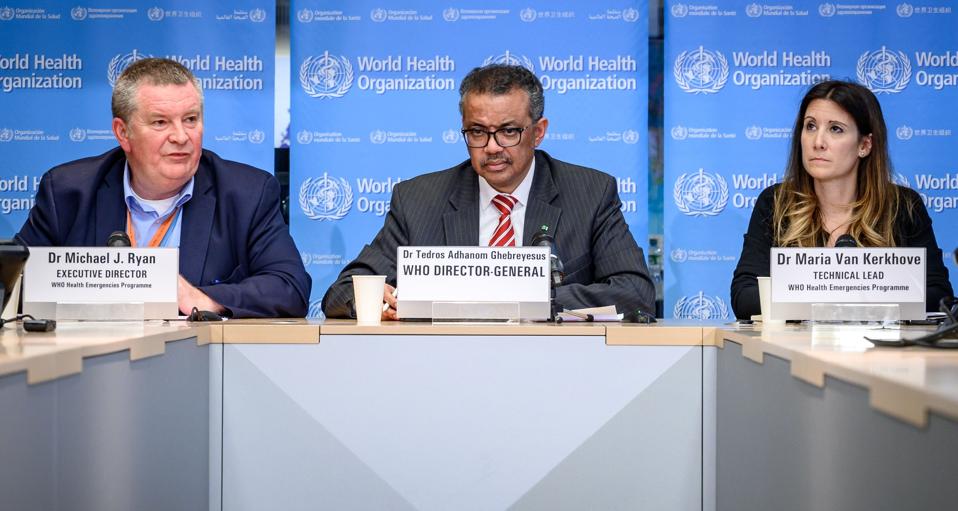 (From Left to Right) World Health Organization (WHO) Health Emergencies Programme Director Michael … [+] Ryan, WHO Director-General Tedros Adhanom Ghebreyesus and WHO Technical Lead Maria Van Kerkhove attend a daily press briefing on COVID-19, the disease caused by the novel coronavirus, at the WHO heardquaters in Geneva on March 11, 2020. – WHO Director-General Tedros Adhanom Ghebreyesus announced on March 11, 2020, that the new coronavirus outbreak can now be characterised as a pandemic. (Photo by Fabrice COFFRINI / AFP) (Photo by FABRICE COFFRINI/AFP via Getty Images)

It’s official. The COVID-19 causing coronavirus (SARS-nCoV2) outbreak is no longer just an outbreak. It is officially a pandemic.

During a briefing today in Geneva, Switzerland, World Health Organization (WHO) Director-General Tedros Adhanom Ghebreyesus declared the outbreak to be “the first pandemic caused by coronavirus.” Here is Sky News coverage of the announcement:

This is probably not too surprising since the “P” word has already been floating around for a while.

So, does this declaration mean that everything changes now? Are things massively different today compared to yesterday? Is it time to pull out the Peter Venkman-line from the movie Ghostbusters, about “dogs and cats living together, mass hysteria”?

Not necessarily, no, and heck no.

Yes, names can really affect how people view something and act. For example, someone describing your hairstyle as Brussels sprout-like as opposed to just a bit poofy could dramatically alter the urgency with which you deal with your hair. Similarly, calling the SARS-CoV2 situation officially a pandemic could significantly raise some people’s concerns and alarm.

Nevertheless, keep in mind what designating something as a “pandemic” actually means. This designation doesn’t refer to the severity or deadliness of the disease. A disease that’s become a pandemic isn’t necessarily more or less of a killer than a disease that hasn’t. The case fatality rate for COVID-19 is still likely significantly higher than that of the season flu but not as high as that of SARS. There hasn’t been a dramatic change in the characteristics of the virus itself or the disease that it can cause.

Rather, the pandemic label is more about how widespread a disease has become. A WHO website defines a pandemic as “the worldwide spread of a new disease.” Therefore, if giggling from cat videos were somehow considered a new disease, then it could technically become a pandemic if it were to spread far enough around the world, even though such giggling doesn’t tend to be deadly (most of the time).

Consider then a pandemic to be the final step in the spread of an infectious disease from something local to something truly global. This is what has progressively happened to SARS-CoV2 from the end of 2019 to today. It all began as an outbreak in late December 2019 when officials noticed a cluster of people suffering from a mysterious pneumonia. An outbreak is simply any situation in which the number of disease cases suddenly increases beyond what you would normally expect. Thus, an outbreak of the word “bruh” would simply be people saying “bruh” much more than usual. SARS-CoV2 was still just an outbreak while COVID-19 were only appearing in a limited geographic area: Wuhan, China. However, once it spread to other areas of China in a sustained manner, it soon became an epidemic in that country. An epidemic is an outbreak that has gone beyond a limited geographic area and continues for a period of time. All epidemics are outbreaks. However, not all outbreaks actually progress to become epidemics. 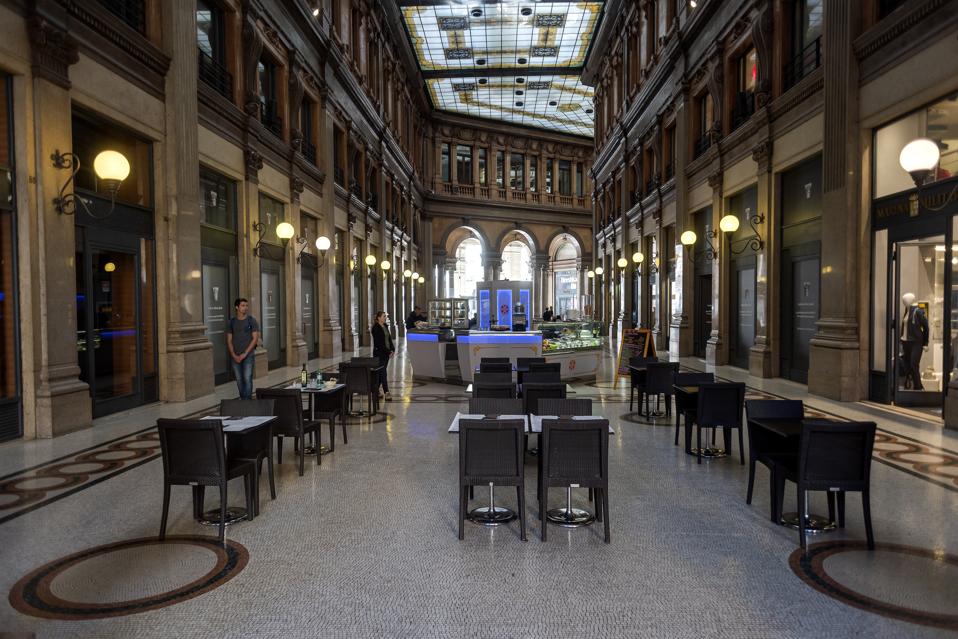 ROME, ITALY – MARCH 11: Deserted Alberto Sordi Gallery in the city centre on March 11, 2020 in … [+] Rome, Italy. The Italian Government has taken the unprecedented measure of a nationwide lockdown in an effort to fight the world’s second-most deadly coronavirus (Covid-19) outbreak outside of China. The movements in and out are allowed only for work and health reasons proven by a medical certificate. The justifications for the movements needs to be certified with a self-declaration by filling in forms provided by the police forces in charge of the check. (Photo by Stefano Montesi – Corbis/ Getty Images)

Once cases of COVID-19 began emerging with regularity in other countries such as Iran, Italy, and South Korea, some people began bandying about the “P” word. After all, the CDC website includes the following definition of a pandemic: “an epidemic that has spread over several countries or continents, usually affecting a large number of people.” As of last week, had SARS-CoV2 not already spread to over four countries and at least three continents? Didn’t it already affect a large number of people? Well, until today, everyone had to still hold in the “P” because the WHO was insisting that the COVID-19 causing coronavirus outbreak had not yet fulfilled the criteria of a pandemic.

So how far does a disease have to spread to be considered a pandemic? Beyond one country? Two countries? Three? Well, the 2002-2003 SARS outbreak never became a pandemic. Not even close. The same was true for the 2014-2016 Ebola outbreak in West Africa and the 2016 Zika outbreak, even though all three of these outbreaks did involve more than one country. 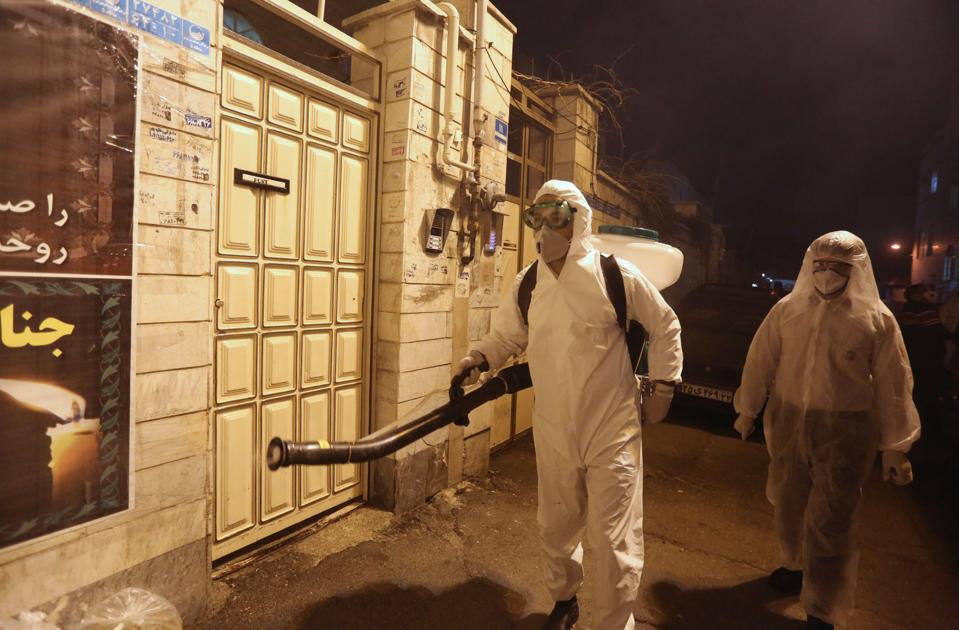 Iranian firefighters disinfect streets and alleys in southern Tehran to halt the wild spread of … [+] coronavirus on March 11, 2020. – The novel coronavirus outbreak in Iran is one of the deadliest outside of China and has so far killed 291 people and infected more than 8,000. (Photo by ATTA KENARE / AFP) (Photo by ATTA KENARE/AFP via Getty Images)

That’s because those three outbreaks didn’t really meet the definition put forth by Dr. Heath Kelly in a Bulletin of the World Health Organization article: “an epidemic occurring worldwide, or over a very wide area, crossing international boundaries and usually affecting a large number of people.” Kelly’s article also stated that “a true influenza pandemic occurs when almost simultaneous transmission takes place worldwide.”

Ah, this last point of “almost simultaneous transmission” is key. This means that the pathogen, which in this case is a virus, is being actively transmitted in many different places throughout the world. Note that cases appearing around the world does not necessarily mean that transmission is occurring around the world. There is a big difference between having to go to one or just a few specific locations to get infected versus having many different places around the world where you may get infected. This distinction is important because once transmission is occurring in multiple places worldwide, the disease is a lot more difficult to control. You can no longer contain or keep the disease to just one location or a few locations.

When transmission is occurring simultaneously throughout the world, the cat is out of the bag, so to speak. The horse is out of the barn. The skunk has left the building. Justin Timberlake has left N*SYNC. In other words, the situation has progressed beyond the point of completely reversing it. It’s like finding that mice have already established encampments all over your house and are already knocking little mouse boots in different mouse beds in different places.

In such situations, the goals then shift from containment to mitigation. Mitigation means trying to reduce the impact of the disease without maintaining false hopes that you will see no impact. It’s like telling the entire world, you are already in the movie theater watching this really bad movie. You cannot not watch the movie. You cannot turn the movie off and play Frozen II instead. The only option now is for everyone to work together to reduce the impact of this awful movie.

A new strain of the flu virus is a different story though. It was a novel influenza virus strain that caused the last thing designated by the WHO as a pandemic: the 2009 H1N1 flu pandemic. Such a new flu virus strain is very different from your standard seasonal flu virus strain. When your body is not used to seeing a virus, it may have little specific immunity to that virus, no matter how many pieces of Kiwi fruit you manage to shove into your mouth. Plus, there is typically no vaccine to protect against a new pathogen because vaccines take, you know, a lot of time, money, and effort to develop. As a result, new pathogens can be a lot more dangerous and potentially mroe deadly. That is why the “new” distinction is important for the definition of pandemic. That is also why new flu viruses have caused very deadly pandemics such as the infamous “Spanish” Flu Pandemic of 1918. This beast of a pandemic ended up infecting a third of the world’s population and killing between 20 and 50 million people.

New flu viruses and this new coronavirus haven’t been the only causes of pandemics. There was the Sixth Cholera Pandemic of 1910-1911 that killed over 800,000 people. And you know when something is called the sixth, it’s not the first time that something like that has happened. Then there was the Black Death pandemic that spanned from 1346 to 1353. In this case, Bubonic Plague claimed the lives of 75 to 200 million people. The culprits spreading this plague were fleas living on rats, which is basically yuck living on yuck.

Not all pandemics spread as rapidly as the flu or COVID-19. The HIV/AIDS pandemic started around 1980 and didn’t peak until after 2000. So far, this pandemic has resulted in over 36 million lives being lost. Therefore, pandemic doesn’t necessarily mean “get done in a year or two.”

While the pandemic declaration today may change how people and countries view the COVID-19 causing coronavirus, it doesn’t completely change what needs to be done. Without a viable vaccine, the best control methods will still be aggressive hand hygiene and disinfection of potentially contaminated surfaces, social distancing measures, and keeping those hands and fingers away from your gigantic face. Nevertheless, calling this outbreak a pandemic does signal to everyone in the world one thing: we are all in this together, fighting a common enemy. That’s assuming that you aren’t part of the new coronavirus lobby. This is not a virus that preferentially infects a particular race. This is not some other country’s or some other people’s problem. This is now truly a global problem. It is time to stop this nonsense about labeling it a “Chinese” virus or blaming a particular country or race. It is time to stop trying to say that this is a hoax. The WHO doesn’t do hoaxes. They do not have enough funding to do so. Instead, it is time for countries to work together and cooperate.