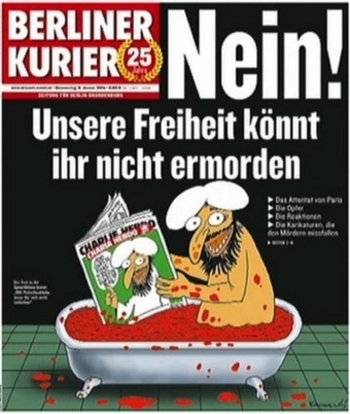 Five years ago today – January 7th 2015 – two Muslim fanatics burst into the offices of the satirical magazine Charlie Hebdo and killed a dozen people, including the bulk of the senior editorial staff and some of France’s best known cartoonists. Herewith some of my instant reaction to the news – and my disgust at the mawkish pap of the frivolous grief-feasters of our dishonest and evasive culture.

I heard about the attack shortly before I went on that morning’s John Oakley Show in Toronto. Throughout the grim half-decade for free speech that has followed, I have thought often of Stéphane “Charb” Charbonnier, the editor of Charlie Hebdo and a great cartoonist in the French style. Two years before his death, he said:

It may seem pompous, but I’d rather die standing than live on my knees.

He did. He was an heroic figure, and he paid for it with his life. One reason for that is because, when everyone else is on their knees, the guy standing up kinda stands out. And Charb & Co had been standing out for almost ten years. As I said to Megyn Kelly at Fox News later that night:

STEYN: Yes, they were very brave. This was the only publication that was willing to publish the Muhammad — the Danish Muhammad cartoons in 2006 because they decided to stand by those Danish cartoonists. I’m proud to have written for the only Canadian magazine to publish those Muhammad cartoons. And it’s because The New York Times didn’t and because Le Monde in Paris didn’t, and the London Times didn’t and all the other great newspapers of the world didn’t – only Charlie Hebdo and my magazine in Canada and a few others did. But they were forced to bear a burden that should have been more widely dispersed…

We will be retreating into a lot more self-censorship if the pansified Western media doesn’t man up and decide to disburse the risk so they can’t kill one small, little French satirical magazine. They’ve gotta kill all of us.

Click below to see the full interview with Megyn:

Instead of sharing the risk, the bigfoot media behaved exactly as they had a decade earlier. At my old London home The Daily Telegraph some gutless pansies decided that their reporting on the story could only be accompanied by carefully blurred images of the late cartoonists’ work in order to avoid giving offense – turning Mohammed into a perpetually pixelated prophet, as if (to reprise a gag I did in 2005) poor ol’ Mo’s entered the witness protection program.

Which is in fact the precise opposite of what’s going on: cowardly media pixelate Mohammed as a way of fast-tracking themselves into the witness protection program, or so they hope. On TV, one of the few surviving Charlie Hebdo staffers attempted to hold one of the offending covers on screen, only to have the camera lurch away. Around the world, the dead cartoonists’ professional colleagues, almost to a man, agreed that the preferred response was some or other limpid, evasive, self-flattering variant of “the pen is mightier than the sword“.

But that line doesn’t work if your pen’s filled with White-Out. Five years ago I quoted Andrew Stiles:

Journalists: These French journalists are so brave!

Readers: What did they do? Can I see?

But I see Mr Stiles’ Tweet has somehow managed to disappear from the Internet. George Clooney held up a pencil and Dame Helen Mirren wore an exquisite pencil brooch pinned to her splendid embonpoint and thousands of tilty-headed wankers with sorrowful expressions marched through the streets of Paris waving pencils. But none of them was willing to do the one thing that mattered – and show what Charb et al had drawn with those pencils. By the following day I was good and sick of it:

To be honest, it makes me vomit to see people holding these Princess Dianafied candlelit vigils, and using the hashtag #JeSuisCharlie – I am Charlie -and in effect appropriating these guys’ sacrifice for this bogus solidarity. It makes me sick to see all these ‘the pen is mightier than the sword’ cartoons that have appeared in newspapers all over the United States, Canada, Britain, Germany, France, Australia, everywhere, from other cartoonists, again expressing solidarity with these very brave men – but not doing what they did…

I’ve been on enough events in Europe with less famous cartoonists than these who live under death threats, live under armed guard, have had their family restaurant firebombed – it’s happened to a Norwegian comedienne I know – have come home and found their home burned, as a Swedish artist I know happened to. And all these people doing the phony hashtag solidarity, screw your phony hashtag solidarity. Let’s have some real solidarity – or if not, at least have the good taste to stay the hell out of it.

That would have been asking too much. In the days that followed almost all those who claimed to be expressing solidarity with Charb were, in fact, signaling very clearly that they preferred to live on their knees.

One exception was that Swedish artist I mentioned above: Lars Vilks. I always think of him as “Larish” because some halfwits in Lahore got his name wrong and marched around the streets with placards reading “DEATH TO LARISH”. Anyway, after the Charlie Hebdo massacre, Lars/Larish gave some interviews hither and yon, and, unlike the lead-free pencil-wavers, was pretty pessimistic:

The consequences of this will be that people become more fearful. I have problems when I have lectures or exhibitions as most things are canceled because of fright. This occasion here will make things even worse and people will be very scared after what has happened. This could also cause problems with censorship because who would dare to publish anything after what has happened..? There have been a few magazines that have tried to keep going as normal and Charlie Hebdo was one of the few ones. This is good for terrorists because they know they can attack one of these few targets. I think a consequence is now there will be even less of these (magazines).

The following month, another Muslim fanatic tried to kill Lars Vilks at a free-speech event in Copenhagen. Vilks survived, but a Danish film-maker and the security guard at a synagogue were both killed. And since then Lars no longer appears in public. “Keeping going as normal” is no longer an option.

On the fifth anniversary of the Mohammed cartoons, Vilks and I shared a stage together in Copenhagen. Also present were Lars Hedegaard, our host from the Danish Free Press Society, and Nekschot, the pseudonymous Dutch cartoonist who for security reasons was obliged to appear in a burqa. Nekschot has now been forced out of public life completely. Hedegaard was shot at point blank range by a fortunately incompetent assassin posing as a delivery boy, and so he now lives in a safe house somewhere. The original commissioning editor of the cartoons, Flemming Rose, was advised by his paper not to attend the tenth anniversary of the Motoons, and indeed Jyllands-Posten observed the occasion by reprinting their original pages but with blanks where the illustrations had been. Like Charlie Hebdo, they’re no longer in the Mohammed business.

In the weeks before the tenth anniversary event, The Spectator‘s Douglas Murray and I traded blackly humorous jests about our indispensability as keynote speakers now that everyone else on the guest list is either dead or in hiding. But, come the big day, behind armed security in the fortress that houses the Danish Parliament, I felt the presence of all those ghosts – Charb, Cabu, Tignous, Georges Wolinksi, Nekschot, Lars Vilks… Every time the coppers put a bullet in the Islamic Nutter of the Month, a hundred more eager young jihadists rush to fill his place. But, on the free speech circuit this last decade, one by one brave individuals are silenced …and no one replaces them.

I pledged in my speech that I would be there for the next anniversary, but I wonder who else will be. For wee colonial lads like me who’ve always been taught that England is the crucible of liberty, it is sobering to contemplate what a lonely champion of free speech Douglas Murray is in his native land. The useless Brit coppers have taken gleefully to their new role as thought police: A week before the Charlie Hebdo massacre, a West Yorkshire man was arrested by Leeds District Police (“Superintendent Mabs Hussein”) for tossing a Koran in a toilet and setting it alight. As Australia’s Tim Blair noted, in Britain you’re free to destroy any book you like. Except one. A week after the massacre, the useless coppers were back in action, visiting British newsagents to demand the names of customers who’d purchased the Charlie Hebdo commemorative issue. The state’s argument to the Sharia loons is: You don’t need to kill anyone. We’ll be your enforcers.

Both Paris and Copenhagen were twofers: the attacks on free speech were followed by attacks on Jews, at a kosher supermarket and a synagogue, respectively. To Obama, this second group of victims were merely a “random” “bunch of folks”. Couldda been anyone, but just so happened to be “a bunch of folks” who like kosher food. As I commented:

I think most of us understand that a huge percentage of Muslims really hate Jews. I have a high degree of tolerance for hate: I spent a lot of time in Northern Ireland during a period when many Catholics and Protestants seriously hated each other, and I came rather to appreciate the way they were entirely upfront about their mutual hatred. The problem here is that in the biggest resurgence of Jew-hate since the Second World War we’re not allowed to say who hates Jews.

That’s why free speech matters. Without free speech, there are only the official lies – about who’s killing Jews in Copenhagen, who’s sexually assaulting women in Cologne – and there is nothing to say in response to either except to crank up the old joanna for one more chorus of “Imagine”.

What happened on January 7th 2015 was terrible. But our response to it made it more terrible, and emboldened civilization’s enemies. With respect to the late Charb, the choice is not between dying standing up or living on our knees – for those who choose to live on their knees will die there, too, cringing and craven. As I said five years ago:

The weepy passive candlelight vigils – the maudlin faux tears and the Smug Moral Preening overdose – aren’t enough. If you don’t want to put out the fire, it will burn your world to the ground.

Wouldn’t the story of Charlie Hebdo make a great novel or play or documentary? Ah, but try finding a publisher or a producer or a network… Millions upon millions declared #JeSuisCharlie …and then conclusively proved they weren’t.

~If you’re one of the many members of The Mark Steyn Club, from Paris to Papua New Guinea, please feel free to comment below. We shall discuss it further on tomorrow’s Clubland Q&A.